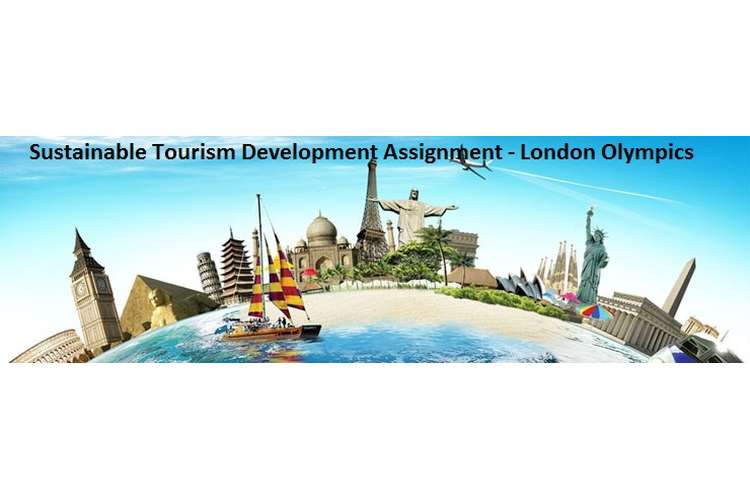 The aim of this Sustainable Tourism Development Assignment London Olympics is to establish a clear understanding of the issues that are involved in sustainable tourism development. This report involves various developmental issues related to the London Olympics games of the year 2012. The successful bidding for hosting the London Olympics of the year 2012 has several tourism related social, cultural and economic impact on the travel and tourism development of the United Kingdom. This report also deals with the enclave tourism in the Dominican Republic and the problems faced by the local public as a result of the enclave travel and tourism in the sector.

P1.1 Discuss how stakeholders can benefit from planning of tourism developments with reference to a current case study 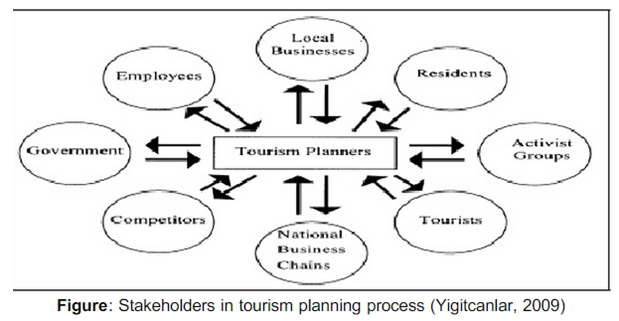 How stakeholders benefit from planning of tourism development for the London Olympiad of 2012?

Stakeholders such as the local communities can benefit from the tourism plan as the plan can be developed keeping in mind the involvement of the local community in the London Olympiad 2012 plan (UNITED NATIONS ENVIRONMENT PROGRAMME, 2009).  The public and private firms also benefitted from the development of tourism planning in London Olympiad of 2012 as with planning there was better management and resource allocation between the private and public ownership. This led to better management of the Olympics hosting

Benefits of stakeholders involved in the planning process

By the involvement of the stakeholders the London Olympiad planning authority could ensure the stimulation of interest and enthusiasm regarding the project. Carefully planned tourism development with stakeholder’s consultation and involvement leads to economic benefits to all the stakeholders, increased tourists’ satisfaction and growth of the social, economic and the physical environment (MACBETH, J., 1997). The participation of the stakeholders in the tourism planning of London Olympiad would ultimately lead to sustainable developments and acceptance of the planning projects by the community and equal distribution of economic benefits and transparency

The London Olympic 2012 hosting was an outcome of lots of planning and implementation of strategies. There was lots of public private partnership. The definition of public private partnership is the collaboration of the public and the private sector in order to achieve a desired goal that is the development of a tourist’s area or a region in case of tourism planning. For the London Olympiad 2012 there were lots of private public partnership for the development of infrastructure such as road, bridges, light rail, water, air traffic control systems and sanitation systems. The adoption of the European Commission in the year 2004 the Green Paper of Public- Private Partnership Community Law came into force. That governed the principle of the PPP (MEIDUT?, Ieva and Paliulis, Narimantas Kazimieras, 2011).

With the Private and Public sector partnership the control of government in the development of tourism is decreased. The risks were shared between the public and private partners for the London Olympiad and all important decisions were jointly taken leading to loss of the control of the government

P2.2 Evaluate the significance of interactive planning systems and processes in tourism development with reference to London Olympiad

It is the tourism plan for an entire country which might include specific objectives for a region of the country. The plan is inclusive of the following components;

These are planning of tourism dealing with specific issues affecting a tourism area within a country. The planning issues vary significantly from region to another. These are the tourism plan specifically for a state, city or a resort. It considers the transfer of tourism related information to the tourists. For regional or local tourism planning there has been the development of; 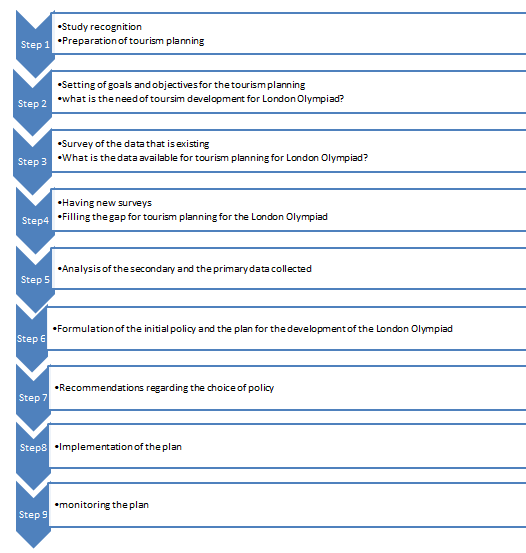 In order to measure the impact to the tourists with reference to the London Olympiad various methods can be used; these are qualitative and quantitative, Cambridge Economic Impact and Sport Tourism Economic Assessment model.

Qualitative Methods to measure tourist impact of the London Olympiad

In this method elaborate information in the form of tests are used to evaluate the impacts.

Quantitative Methods to measure tourist impact of the London Olympiad

The Sport Tourism Economic Assessment Model: By the model the economic impact on the host country as a result of hosting a sport is assessed. It is also known as STEAM. The economic impacts of the London Olympiad 2012 would be assessed in this model of evaluation.

The Cambridge Impact Model: Using this model the London Olympiad authority would assess the net worth and net volume of the tourist inflow. This model evaluates tourism impact by the help of statistics and survey data (CANADIAN SPORT TOURISM, 2013).

P4.1 Evaluate methods of resolving a conflict of interests to ensure the future wellbeing of a developing tourism destination such as Casa do Campo region in the Dominican Republic.

In the Dominican Republic the Casa de Campo is located in the south east coast in the region of La Romania. These resorts where developed converting 7,000 acres of sugar mills into enclave tourist’s resorts. The Casa de Campo region is suffering from various current issues that are impacting the wellbeing of the tourism development in the region.

Analysis of the current issues in the CASA DE campo region

P 4.2 Analyse the implications of balancing supply and demand with reference to the case study assigned for task

The balancing of the demand and supply of tourism is an ethical issue. Tourism has market led demand which needs strategies that are oriented to the supply to establish a proper balance. In the case of Casa de Campo the balance is not established as there is no proper and regulated involvement of the public and private sector, the non-profit bodies and the local residents of the region. The management of the tourism supply in the Casa de Campo region is not regulated leading to supply imbalance as the region has limited access to tourists and the indigenous population (FONT, Xavier and Ahjem, Tor E.).

For balancing the demand with the supply in Casa de Campo region there is need to;

Promote the infrastructure projects and develop them for the growth of tourism. Also private public partnership and private investments must be encouraged in the region in order to balance the demand with the supply

The World Tourism Organisation defines social carrying capacity as the maximum number of people that a tourist destination can accommodate at the same time without causing any destruction or harm to the physical, economic, social or cultural environment of the tourist destination. For balancing the supply and demand of the tourism the determination of the social carrying capacity of any region is very important as it would lead the Dominican republic to hold and have influx of the amount of the tourists at any given point of time that the region can hold without any hindrance or destruction to the establishment of a sustainable tourism in the region. The ministry of tourism in the Dominican Republic must cooperate in the initiative of development of tourism in the region (Sambrook & Kermath, n.d.) 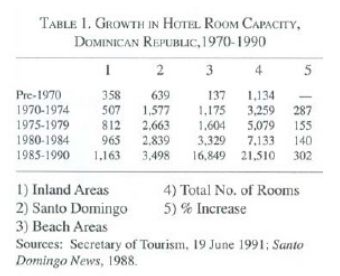 The figure above shows that in order to match the demand with the supply in the Dominican republic there has been a substantial increase in the hotel room capacity so that the tourists due not suffer an imbalance of accommodation according to the demand. In order to balance the tourism demand and supply the government of Dominican Republic has taken planning and development of international tourism in the region.

P 4.3 Evaluate the moral and ethical issues of enclave tourism of the Hotel resort Casa do Campo

In casa de Campo region the enclave tourism exists. Enclave tourism is defined as the type of tourism in which there are resorts that are self-equipped and contained. All the necessities of life are provided in tourism in these resorts. They are also known as cities in a city. Mostly, these tourist destinations are situated near tropical and coastal areas.

Another moral and ethical issue in this type of tourism is that the local goods and services are not used. The employment generated by enclave tourism is seasonal in nature.

Enclave tourism in Casa De Campo region is associated with many moral and ethical issues they are;

Task 5: Understand the socio-cultural, environmental and economic impacts of tourism in developing countries and emerging destination

P5.1 - Compare current issues associated with tourism development in a developing country and an emerging destination where the impacts of tourism are different for the chosen destination.

I am selecting India as an emerging tourist destination.

In developing economies like India tourism has become one of the chief contributors to the economy. A large portion of the income of the economy is derived from travel and tourism. 6.23% of the GDP contribution is derived from travel and tourism. World Travel and Tourism Council predicts that during the period of 2009-2018 India will be the hotspot of tourism (H.Lalnunmawia, 2013). 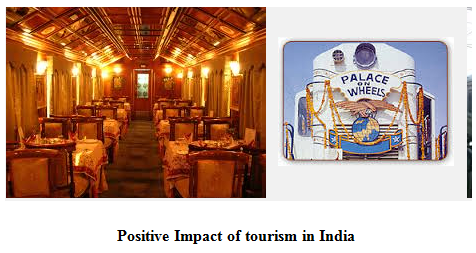 Negative impacts of tourism in India

P5.2 Evaluate, with recommendations, the future development of tourism in these chosen destinations

India requires intensive tourism planning to ensure a sustainable tourism in the country.  India needs to develop the tourism industry benefitting the economy and the local community to the maximum extent and driving off the negative impacts.

Evaluation of the future development of tourism in India

India has a bright prospect of growth of travel and tourism industry in future. The industry is developing and India is offering variety of tourism packages emerging as a one stop destination. The government of India is also taking initiatives to develop travel and tourism. India in future will be a tourism hot spot as it offers,

India is one amongst the few countries offering variety of tourism experiences to suit the needs of all types of visitors. With the speedy implementation of tourism projects in India and development of rural areas the prospects are bright also the visa policy of India will also be modified enabling an electronic online visa. 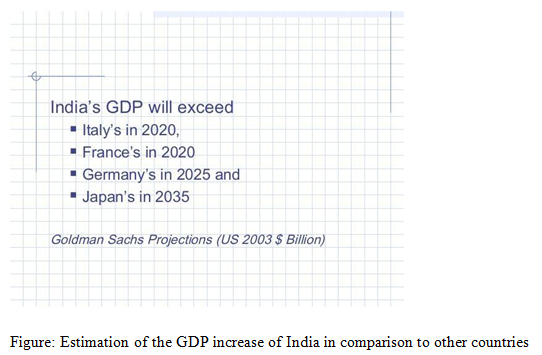 Recommendation for future development of tourism in India

This report stresses on the need of striving for the development of sustainable tourism. A responsible tourism is one in which the government, private bodies and local communities share responsibilities and initiatives. Tourism development requires proper sequential planning and management. There is a need to access and evaluate the economic, social, cultural, moral and ethical impacts of tourism in every destination.

Locus Assignment Help UK is the top assignment writing company in UK, We provides of courses assignments help at affordable prices to help the students in best any easiest way.