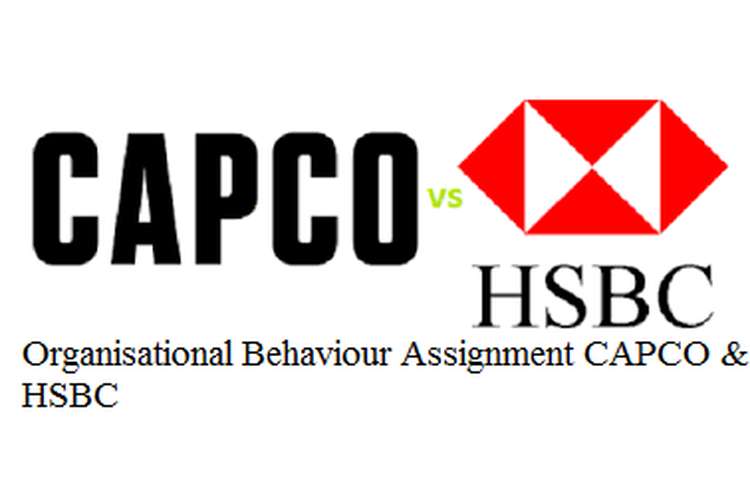 Organisation culture for the organisations is mainly formed to set a discipline in the organisation. The objective is to increase the productivity while giving superior value to the clients. Thus every organisation will try to set the culture which will empower the employees and help to achieve the common target.

There is a direct relationship of the CAPCO’s structure and culture on the employees performance and that can be determined from the following observations:

So from the discussion it is clear that both the structure and culture has a wider influence in the employee’s performances. An employee will give their best performances when they will be motivated and also the environment will support them. Thus both the variable plays a major role in the terms of motivation and coordination which can help the employees to get a route map about the work activities.1.3 Discuss the factors which influence individual behaviour in CAPCO or in any organisation of your choice.

Thus we can observe that there are there are several factors which can positively or negatively influence the behaviour of the individual. The factors needs to be analysed and formulate certain strategies which will help to overcome the negative sides and enhances the productivity of the organisation.

Evaluation of the different approaches by the management used by CAPCO and HSBC bank can be done in the following way:

Leaders are the people who have the ability to influence other people with their experience, knowledge, skill and the approaching styles. The leaders are responsible to increase the motivation of the employees in the organisation. The objective of the organisation determines the leadership styles to be followed in order to establish a positive working environment in the workplace. For instance certain change at CAPCO like rotating the employees from one team to another. In this perspective of the change, the leadership styles that have different impact can be assessed from the following way:

Thus we can observe that motivational theories are linked with the management practices in order to deliver the motivation among the employees for getting more productivity in their performances.

The role of a manager in the organisation is very much important from the business point of view. The manager is responsible to make the things done in the organisation. For this responsibility motivation is the only requirements to make the things done. For example if the organisation has planned for a change in some work process then it is the manager who needs implement the change by motivating all the employees under him/her. In that perspective motivation theories can be applied for example factors leading to the dissatisfaction as per Herzberg theory will help the  developing manager  to understand the reason for the dissatisfaction and needs to overcome the situation by undertaking the measures. It is very much common that the organizations failed to achieve the target due to the performances of the employees and for that a manager is needed to understand the theories of motivation and apply to the situation for increasing the productivity. It is the motivation that can uplift the employee’s performances which will support the organization to achieve the target. Not only motivation has a direct relationship with the target achievement it also influence the working environment at the work place. If a manager involves all the employees in a decision making process then the employees will think once for giving unproductive performance. The initiative will motivate the employees to give their best performances and also help to create a positive working environment in the work place. (Fox, 2010).

Motivational theories can be related within the workplace by adopting the applications prescribed by the theories. As per the Maslow’s Hierarchy there are five needs which the human being wants to achieve. For example supporting the basic needs of a human being can be related with the employment opportunity given by the organisations like CAPCO. Secondly supporting the security needs are fulfilled by the organisation CAPCO by providing the health insurance, employee’s welfare schemes, flexible policy etc. Thirdly, psychological needs are fulfilled by the organisation CAPCO by forming the effective teams of the consultants and also by maintaining a positive working environment in the organisation. Fourthly, CAPCO supports the employees by fulfilling the self-esteem needs by providing rewards and recognition and also promoted the consultants to senior consultant’s hierarchy etc. Lastly, CAPCO fulfil the self-actualisation needs by providing challenging jobs or deals to the consultants for managing the premium clients. (Gagne, 2014).

Thus we can observe that Maslow’s need theory can be related in the workplace for increasing the motivation which will boost the employees morale and participation in the business of the organisation and that will enhance the business towards profitability.

Read About Aspects of Contract and Negligence

4.1 Explain the nature of groups and group behaviour within CAPCO or you chosen organisation

Groups are the collection of employees who used to share common goal and purposes. It is difficult for an individual to achieve the objectives and for that reason the groups are being created for meeting the goals effectively with equal contribution. Based on the organisation CAPCO groups or the teams are formed for the consultants who used to deal the clients by giving financial solutions. There are several types of groups which are formed based on the objective. (Sofroniou, 2013).

For example at CAPCO the nature of the groups is:

Group behaviour is also one of the important factors in order to determine the effectiveness of the group. The group behaviour can only be determined if we relate it with the Belbin’s team role by the following way: (The Team Building Company, 2015).

Thus from the Belbin’s team role we can easily understand the group behaviour where the members shows several ways in order to achieve the group targets.

There are several factors which are associated with the teamwork at CAPCO which will promote or inhibit in the following way:

4.3 Evaluate the impact of technology on team functioning within CAPCO or your chosen organisation

Technology is the process or the methods used by involving the machines, computers, or any other electronic devices. Sound team functioning can be possible with the help of technology. Not only the team functioning but also helps the organisation to reduce the operational cost and in the same time can also bring more efficiency in the work process.

The positive impact of the team functioning at CAPCO can be analysed from the following way: (Edmuds, 2016)

There are also the negative impacts which are associated with the technology like: