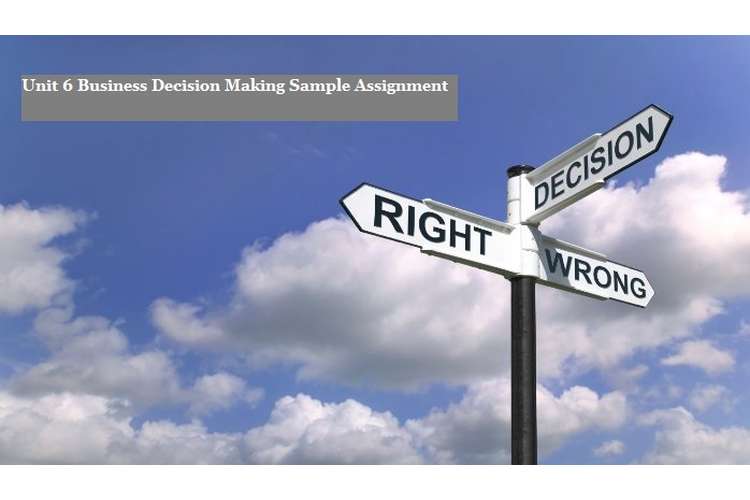 This assignment consists of 4 broad tasks relating to Business Decision Making to hone the skills relating to:

P1/2.Creationof plan for the collection of data for research on Sainsbury’ sand present the survey methodology and sampling frame used

To begin with, any research aims at discovery of facts or relationships, hitherto unknown or not recognised. Collecting relevant data would always be the cornerstone of a valid research proposal. The question requires one to plan suitable methodology and technique with the view to validate certain research questions on Customer satisfaction levels relating to Sainsbury, the well-established retail chain in the UK. The specific focus would be to bring out the Values, Culture, Commitment to operational excellence, Customer service quality, and fairness in prices that Sainsbury’s ostensibly boasts of maintaining high standards in.
Since theaims are clearly defined, planning an appropriate survey methodology should enable coverage of, as large a population base as possible, in order to ensure a widespread representation.
Primary data collection is mostly carried out through surveysusing Questionnaires and Interviews.  Unlike interviews I think, using a questionnaire in this research, would generate a higher level of objective and concise data, over all areas of scrutiny within the research.
Also, since various qualitative aspects relating to customer satisfaction levels of Sainsbury’s, client perception on price level maintenance and cultural and value upholding, are being researched about, a questionnaire would render itself to intelligent, well designed and close-ended questioning.  In order to reduce respondent impatience, some techniques used were:

At all points, the ease with which data collected could lend itself to useful analysis and valid conclusions, was kept in mind.
A sampling frame refers to the population or units from which the sample respondents are drawn. While Random Sampling would have made the exercise truly objective, it would be better if a Stratified Sample were to beused, for a homogeneous, segmental representation.
For the purpose, the UK Electoral roll voter listing will be utilised. While this listing has approximately around 46 million voters, the same would be stratified in the following manner, to make a suitable frame:

The advantage of the electoral voting list was the fact that it would be an up-to-date list minimising blind ends, having current contact information and demographic details such as age, contact details etc. would be available for in-depth analysis, if need be, at a later stage of research.

Q3. Can you list the top 3 items in your household shopping in supermarkets? 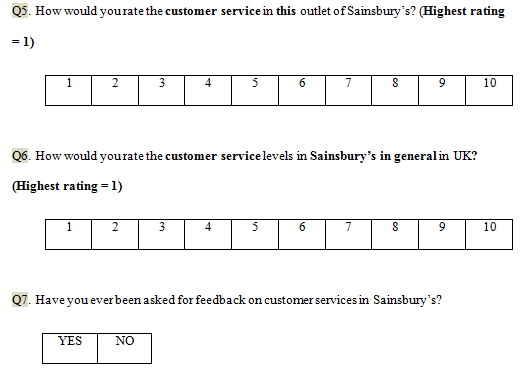 Q8.How would you rate the decor and ambience while shopping in this Sainsbury’s? (Highest rating = 1) 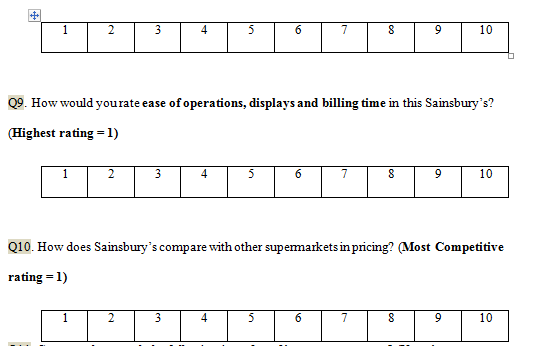 Q11. Can you please rank the following in order of importance to you? (Very important to me = 1) 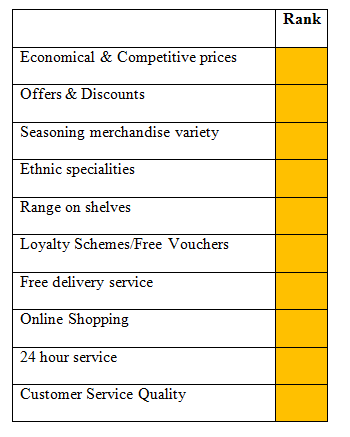 Q12. Any other comments?

Thank you for your time and feedback. Hope you have a great day!

Data protection issues and Ethical considerations relating to the research:

In the UK, the Data Protection Act 1998 imposes a legal obligation on people to protect handled personal data and identities. Further, in line with the provisions of the Act, it would be required to make participants aware of the identity of the researcher, purpose of the research, any potential disclosure of data collected and explicit consent for the same needs to be obtained from them. Such information could be shared with respondents as an introduction or be part of surveys such as questionnaires.
The researcher also bears the burden of representing information published in the research, in a truthful manner. He or she should not misrepresent or hide observed phenomena, but must report observations even if it contradicts the research intent and hypothesis. A high degree of openness in conducting the research would enable the researcher to benefit from divergent views, which would only add depth and high credibility to the emerging conclusions, making the research defensible and robust.  These are the ethical expectations from high quality papers, which reflects on the organisations and behaviour or individual’s reputation, within the academic community.

P4/5/6/12. Summarization of DataUsing Representative Values and Measures of Dispersion

Averages are considered to be a meaningful method of identifying representative values in a data set and are also measures of central tendency. The most useful among the averages include the Arithmetic Mean, Median and the Mode. In case of the performance highlights of the 2 competitors i.e. Sainsbury’s and Tesco, the various averages can be summarised as follows:

The above numbers indicate that while Sainsbury’s may command a higher market segment, Tesco shows a greater profitability, i.e. higher return on sales, better cost control over the historical period tracked.
Measures of dispersion refer to various indices which tell you how spread out (or dispersed) a data population or sample is, in a quantitative manner. Most commonly used indices are Standard Deviation, Range and the IQR or Interquartile range.
The summary of data on the basis of means of dispersion, is given below:
Range being the simplest measure, it gives a very basic idea of dispersion in a data set.

It can be concluded that in Sales, Tesco shows greater dispersion than Sainsbury’s while in Operating Profit Sainsbury’s has a wider range compared to Tesco. However, it must be kept in mind that the number of years being compared are not the same (25 for Sainsbury’s as against 16 for Tesco) and one cannot meaningfully conclude a trend from this. When the same 16 year period is compared:

Here, one can reasonably conclude that Tesco’s Sales have grown exponentially compared to Sainsbury’s, while Sainsbury’s operating profits have done commendably better than Tesco’s. This does not say anything about the industry-wise comparison, however, but only relative performance of the two companies.

Standard deviation is a measure of how concentrated the data is around the mean and in many cases, the smaller the standard deviation the better the performance, as for example in case of a manufacturing outfit which measures quality of its products through repeated data measures which may confirm quality standards or failures leading to rejections. However, in this study, when comparing performance or growth over many period of years, a small figure would basically indicate stagnation or lack of growth and not found to be desirable.

Identification of quartiles help in quantifying scatter of data and is a useful technique in assessing the relative standing of an individual within a group. It can be thought of as a method of ranking and 25th percentile implies that 25% of the values lie below this level and another 75% above it. The difference between the 75th and 25th percentiles signifies the IQR. The median is the half way mark and half the values are spread out on either side of this percentile.
In financial growth within an industry (i.e. like the given data), the quartiles may help is indicating whether the growth over the time frame considered, has been steady or sporadic and may lend itself to competitor comparisons. For example, in case of Sainsbury’s (Sales), the IQR or difference between the successive quartiles are: 4,837 and 2,145 while the same difference in case of Tesco are: 11,542 and 15,237 respectively. This would indicate that there was more consistent growth in case of sales performance by Sainsbury’s and by comparison, small but reducing growth in case of Tesco sales.
Thus dispersion indices also help comparison not only in case of studies within a population group, but also amongst competitors.

Correlation coefficient(CC) is a number which can identify if there is a relationship between two sets of data and if so how strong the relationship is and in which direction. Thus if we were to consider  the sales data and its movement vis-a-vis Operating Profit of Sainsbury’s, by calculating this value(CC), we could assess if the two are moving in tandem or in opposite directions or somewhere in between i.e. relative strength or weakness of relationship can be assessed.
The CC of the two variables when estimated shows the following picture: 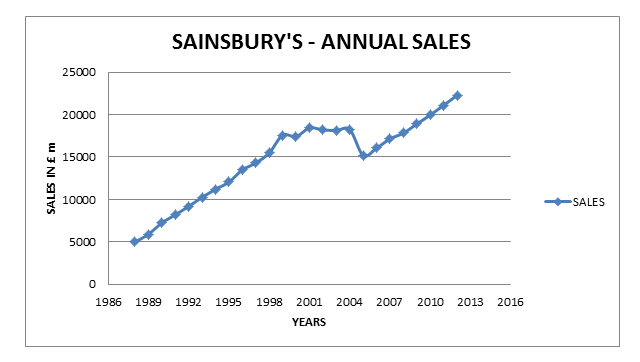 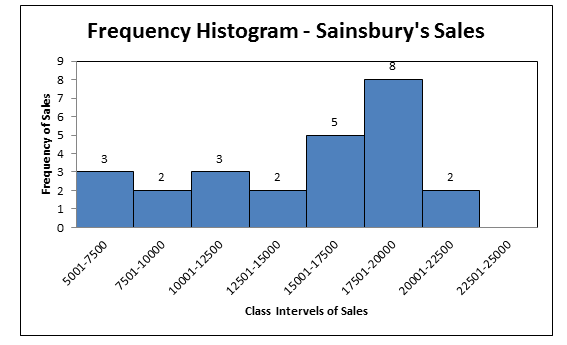 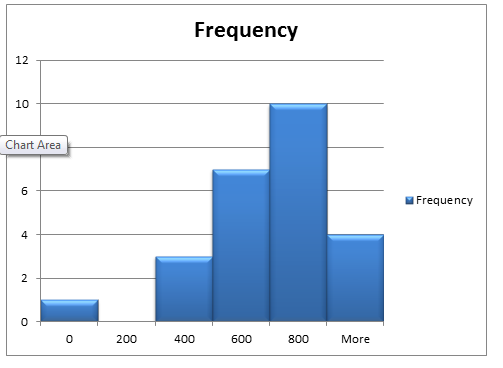 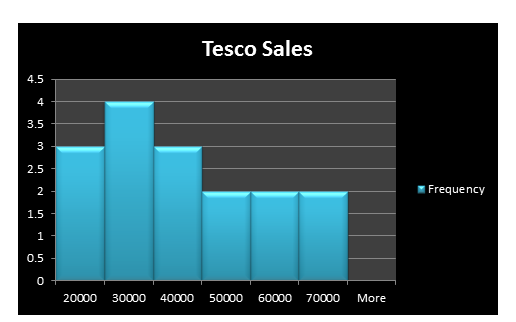 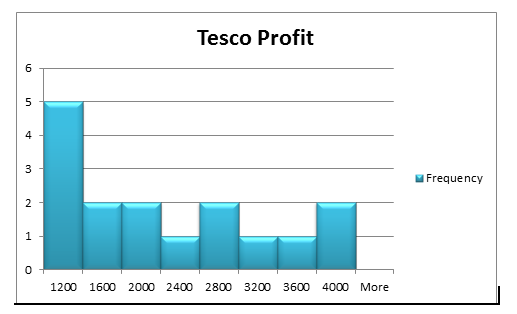 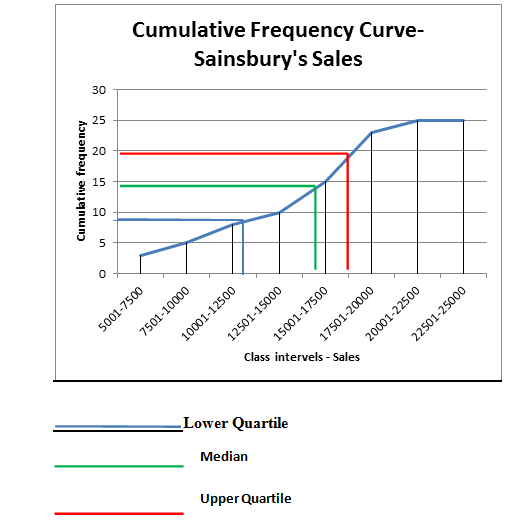 P9/12. Create Trend lines for the Sales and Operating Profit and Estimate Sales 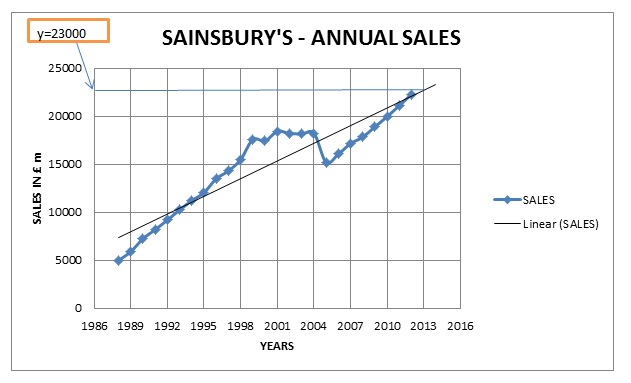 The trend line in this case does not pass through quite a few of the plotted points and hence appears to be further away from the group data. In this case the Coefficient of determination (r2) is likely to be low (say below 0.50) which implies that the estimation may not be very successful. 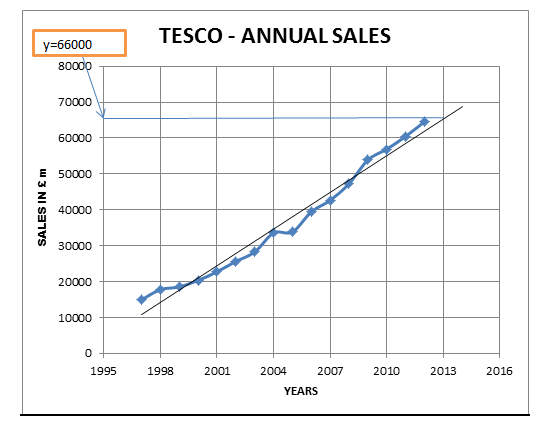 As the trend line passes very close to most of the points plotted, the r2 is likely to be > 50% which makes the predictions more reliable and certainly level high.

Estimated 2013 year end Operating Profit for Sainsbury’s, based on trend line is £ 650 m.

This trend line exhibits a great degree of uncertainty with a high number of points appearing to be outliers, making the estimation less certain of proving successful. 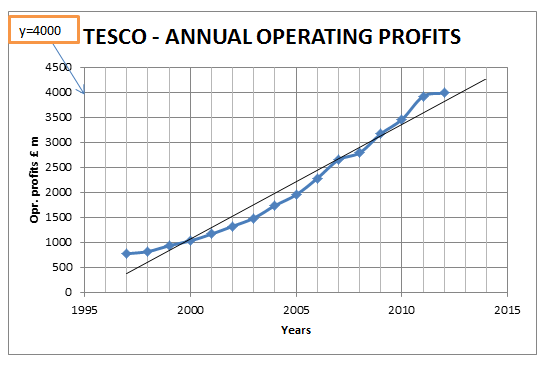 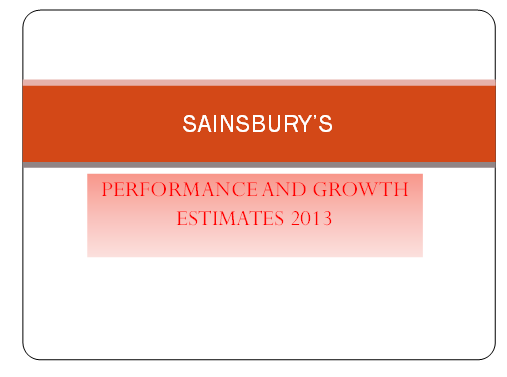 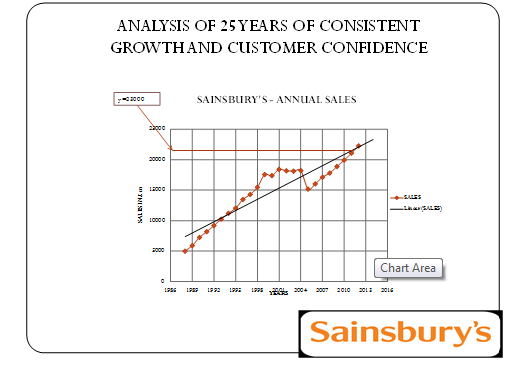 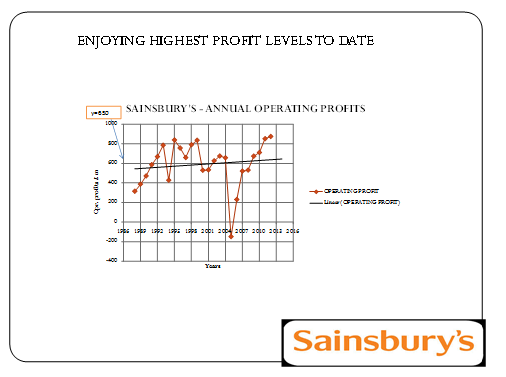 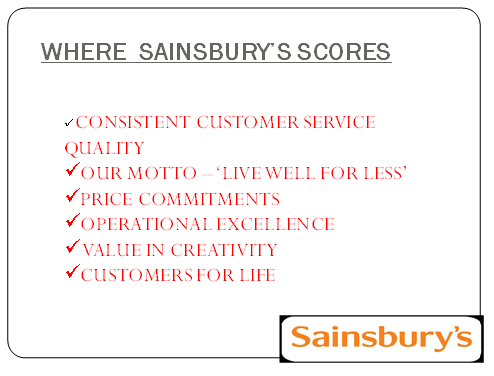 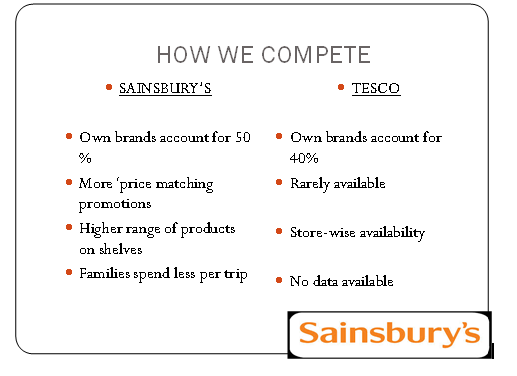 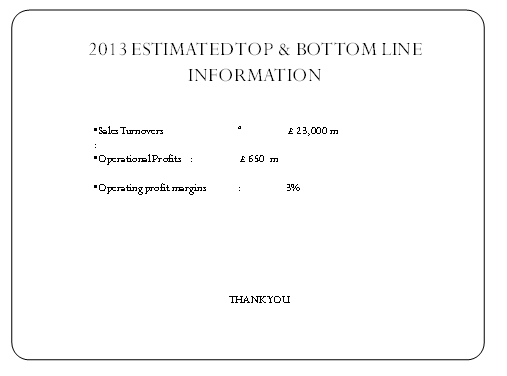 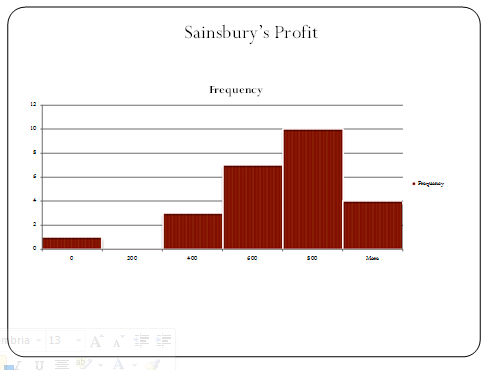 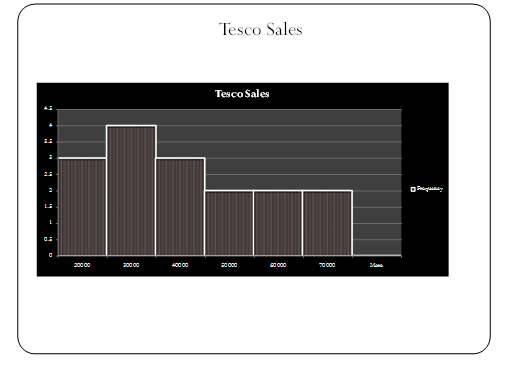 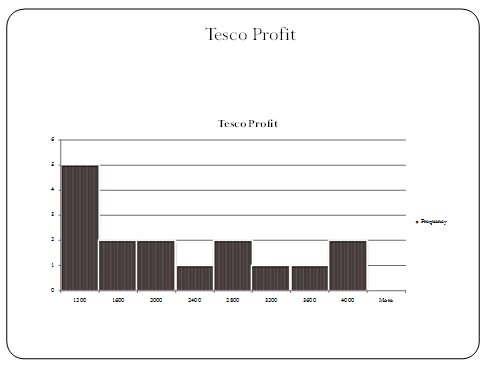 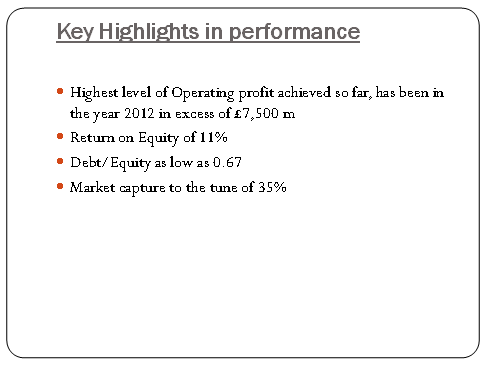 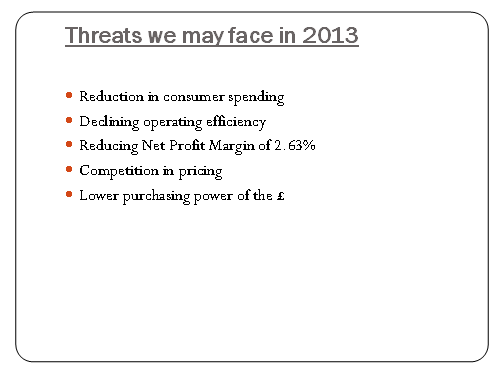 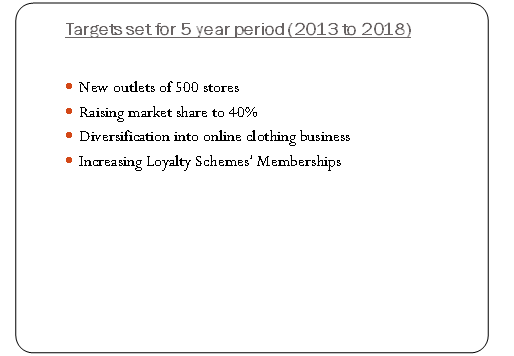 The Critical Path is identified as B-C-F-G 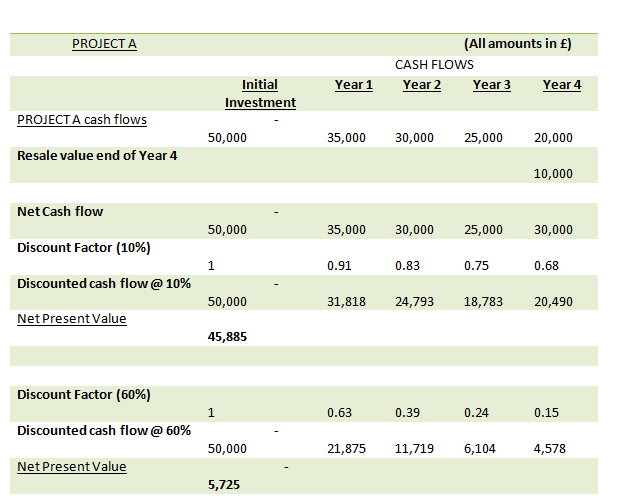 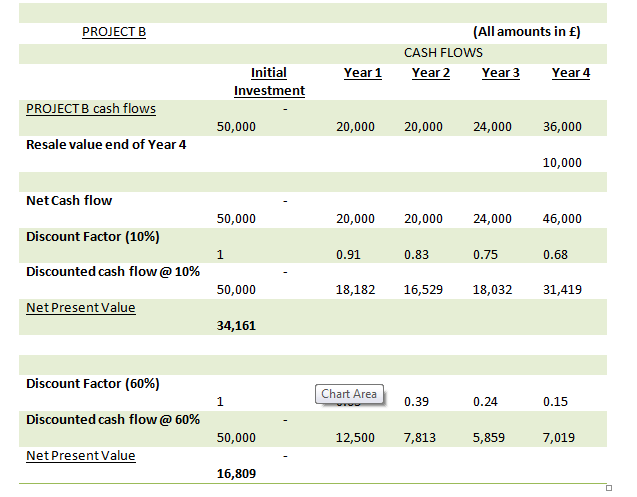 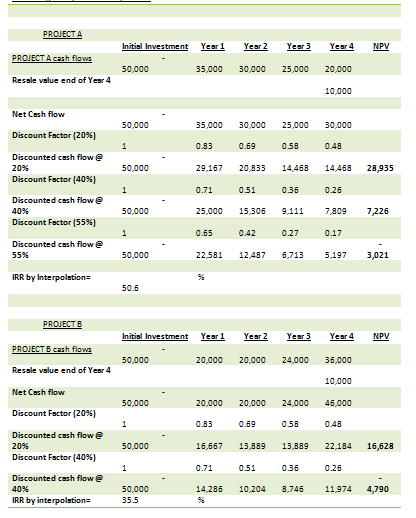 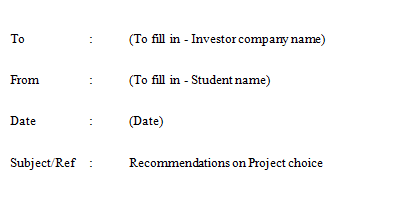 While considering the options available to the company, between investing in Project A and Project B, the following need to be considered, in order to make a decision that would be most viable for the company:
If Project A and B are considered to be mutually exclusive due to constraints on availability of investible resources, then Net Present Value works out as follows

Hence I recommend that the company invest in Project A over Project B, if the two are mutually exclusive ones.

The 4 key tasks have been completed in keeping with the requirements of the brief and has made use of appropriate applications such as power point and excel to forecast, present and communicate the emergent findings relating to the various business situations visualised in the assignment.