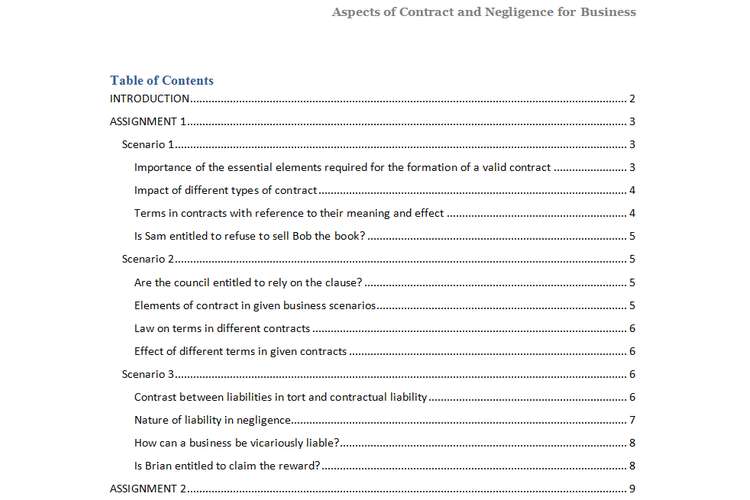 The law of contracts deal with agreements between two parties which agree to be legally bound by. There are certain elements that need to be present to make a contract a legally valid contract. They are as following:

Impact of different types of contract

Terms in contracts with reference to their meaning and effect

Is Sam entitled to refuse to sell Bob the book?

In this case Bob goes to Sam’s shop and takes a book and goes to the counter but Sam refuses to sell the book as he had already sold it to Carl. In this scenario Sam can refuse to sell the book to Bob because display in a shop is an invitation to treat which means that it is open for negotiations but it is not an offer therefore the seller is not bound to sell the product to the customer as was given in the leading case of Pharmaceutical Society of Great Britain v Boots (1953), therefore Sam is entitled to refuse to sell Bob the book.

Are the council entitled to rely on the clause?

Elements of contract in given business scenarios

Condition:is the most important term in a contract and if it is breached then the party can terminate the contract

Warranty: it is a small term in the contract which if breached will only result in claim for damages.

In the given contract, the exclusion clause was incorporated in the contract as the ticket was not an offer, therefore the council cannot rely on the exclusion term and they are bound to be liable for the damage caused to Barry this was also held in a similar case of Chappleton v. Barry (1940).

Contrast between liabilities in tort and contractual liability

The law of tort: Is a law which is also known as civil wrong which only protects one person from the legal injury caused due to negligence on the part of the other person. In tort one person is supposed to show duty of care towards another person especially if that person is indulging in some work of dangerous nature.

Nature of liability in negligence

In negligence law it is required that the people should act in a careful manner so that there is no injury to the other person and when the negligent act has caused an injury to the other person then the law requires that the person who has suffered injury must be compensated. There are some elements that must be present to fix the liability under negligence and they are as following:

How can a business be vicariously liable?

There are some defences to vicarious liability and they are as following:

To prove the vicarious liability the following factors are required to be seen:

Is Brian entitled to claim the reward?

In the present case the advertisement by Adam was an offer made to the world but when the person has made an offer he has the option to withdraw the offer before accepted and in case the acceptance is by conduct then the offer can be withdrawn before the act or conduct is completed and in the present case the offer was withdrawn before Brain had completed the act therefore Brain cannot claim the reward from Adam as this was a unilateral contract as offer made to the world are known as unilateral contract which was held in the case“(Carlill v Carbolic Smoke Ball Co., (1893)”.