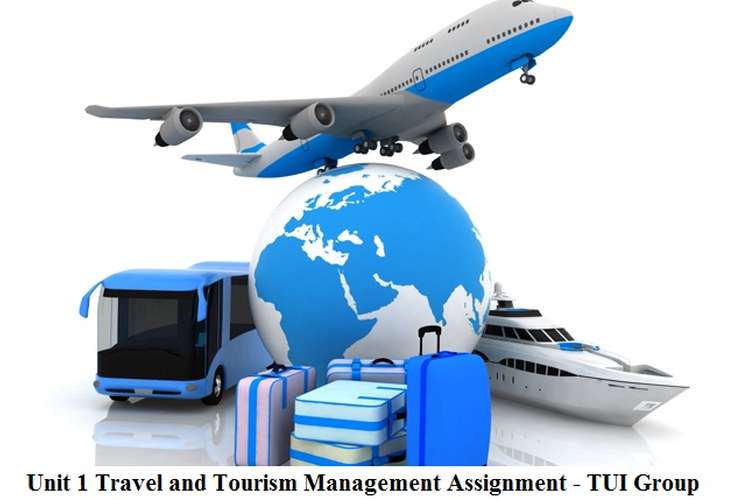 1.1  Explain key historical developments in the travel and tourism sector. 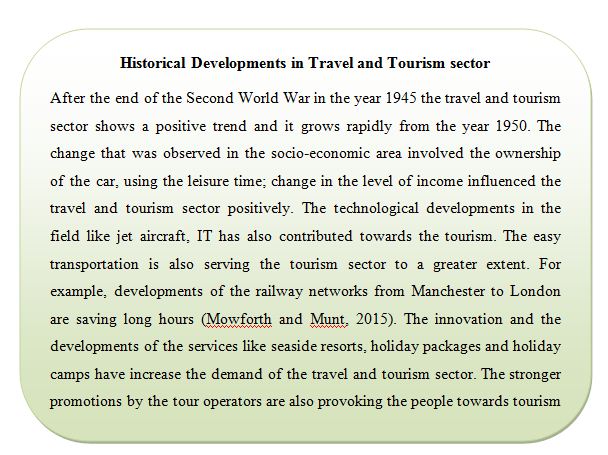 The key historical developments in the travel and tourism sector of UK are highlighted in a form of time line chart below:

1.2  Explain the structure of the travel and tourism sector. 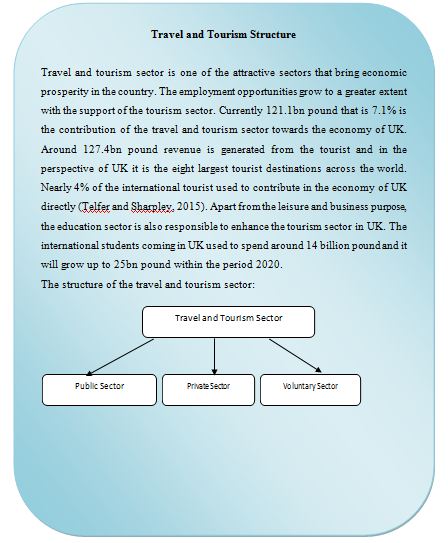 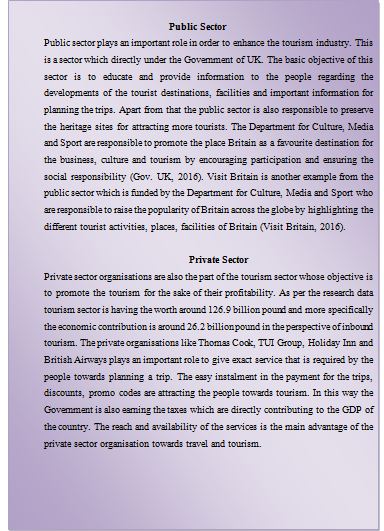 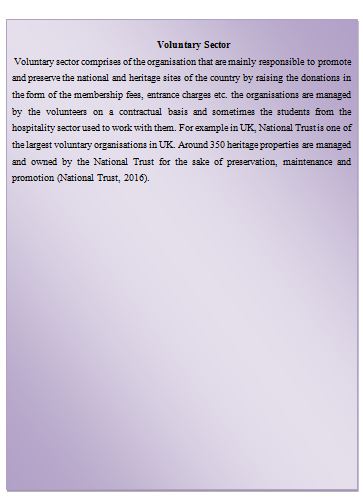 The power and influence in the society as well as in the decision making process of the public policy. The political factor is one of the major determinants of the growth of the travel and tourism sector across the world. It is the role of the Government and its administration that determines the attractiveness of the travel and tourism sector. The stability in managing the administration can help the travel and tourism sector to flourish. The negative situations like political unrest, political movement will destroy the tourism by creating negative impact. The restructuring policies by the Government are also the positive side for the growth in the tourism sector. The collaboration or Public Private Partnerships are the effective ways under the political areas of the Government. The Government of the countries like Australia, New Zealand, Canada gives emphasis on the corporate structure of the travel and tourism in the form of collaborative marketing, joint promotions in order to attract more visitors across the world. On the other hand the political unrest in the country Egypt has decline the tourism sector around 95%. From 250 million pound the revenue has drop 10.5 million pound (Hutchinson, 2014). With this decline the job losses are also significant. The forums are established in Egypt which is working with the citizens in order to bring peace and stability in the economic situation. Critical conditions are also there in Turkey which is one of the favourite destinations among the world. The furious political movement between the people and the militaries has created a negative impact in the tourism sector of Turkey. The decline in the international tourist is significant. For example around 95% of the Russian tourist towards Turkey has come down. As per the market research, the occupancy rate has fallen tremendously around 80% and the job losses are also significant (Lowen, 2016). The positive impact is observed in the political change of Cuba where the system of command economy was prevalent. The collapse of the Soviet Union and the colonial rule brigs certain developments in the tourism of Cuba. Currently 2 million foreign arrivals are observed in Cuba. The Ministry of Science, Technology and Environment was established by the new Government of Cuba which has taken different measures to bring the tourism towards their country. Restriction in the trade was there in Cuba with US that are also termed as Embargo and as a result the tourism was not significant. After the change in the political condition, the embargo is cancelled and integration in the local bodies is done to enhance the growth of the tourism. After the change decline of Qing dynasty in China, the Republic of China brings certain changes in the economic policy and legislations. The open market economy was introduced in China which invites several organisations for managing the trade and operations in China. The low corporation taxes for the foreign companies excited the globalised business firms to open their business destination in China. This has also brought development in the tourism sector. The countries like UK and China makes an agreements regarding the VISA and ensure simple steps to apply in order to attract the tourism. Very recently, majority of the people in UK has voted for the separation with EU and that brings an important consideration towards the travel and tourism sector. One-eleventh of the GDP is accounted for the UK tourism and as a result three million employments have created. Thus the formation of Brexit will definitely affect the domestic tourism. Inbound holiday makers are around 63% and that is from the member states of EU (Calder, 2016). Certain restrictions in moving freely in UK will be influenced by the formation of Brexit and that can influence the tourism. On the other hand the issues with the immigrants can be reduced with this separation and bring more employment opportunities for the British people towards the travel and tourism sector. Thus in these ways the tourism sector is affected by the change in the political environment of the country.

Tourism is one of the fastest and attractive sectors that have a capability to attract foreign currencies towards the national economy. The factors that are influencing the demand in the travel and tourism sector are as follows:

3.2 Explain how supply has changed at TUI group to meet the effects of demand

In order to meet the effects of demand, TUI group has bring enhanced service to the customers by creating an extended product line in the areas like airlines, hotels, cruise liners, travel agencies etc. The management of TUI group is expecting a growth of the business turnover around 10%. Around 76, 000 employees are working in order to manage the operation effectively at TUI. Thomson Cruises Fleet has been modernised to expand the luxury service segment. Etihad Aviation group and TUI has form a partnership in the aviation sector to serve the destinations like Germany, Switzerland and Austria effectively. Lastly Air Berlin PLC has come in to the agreement for giving integrated services to the people. Expansion is the main strategy adopted by TUI group to meet the effects of demand. The services of the hotels like RIU, TUI Magic Life are expanded in order to serve more guests. Moreover the new four star hotels TUI Sensimar Lagoon will be opened at Mauritius to serve the guest from the month of November 2016. Along with that TUI Sensimar Natura Palace is located on Playa Blanca which will have 270 rooms and that will also initiate the service from the end of the month November 2016. Branches of the tour operators are given focus and expansion of the areas is considered. In UK, the tour agencies like First Choice, Thomson have maximized their reach and availability by increasing the service to the people. Nearly 136 long haul and medium flights are there to serve the guest effectively. Around 180destinations are covered by the airlines of TUI for meeting the demand of the tourism across the world. Currently TUI in hotel segment is operating over 25 countries with 210000 beds (TUI Group, 2016). The cruise service of TUI Group like Hapag-Lloyd Cruises serves the expedition demand of the people across the world. In order to serve the people of Britain there are five liners of Thomson cruises and more four are ordered to serve the British market effectively. The expansion in the service delivery and partnerships with other organisations are mainly recognized in order to meet the demand effectively.

4.1 Explain the main positive and negative economic, environmental and social impacts of tourism with reference to TUI group businesses.

The economical, environmental and social care create an impact in the tourism sector and influence the decision making process of the organisations operating in this sector. In the perspective of Thailand and Egypt, the main positive and negative sides are as follows:

Economic:Thailand is country situated in the South East Asia and serve as rich sources of tourism in the form like temples, foods. Beaches, etc. 11 million visitors used to visit this country yearly. The tourism is increasing in this country rapidly by injecting 29695 million baht towards the GDP. Nearly 20 million dollars are generated as a source of revenue from the tourism sector. The Government of Thailand has targeted 15.8 billion tourists within the year 2020 (March, 2014). The Government has planned the tourism by incorporating new services which can boost the economy like give license to the hospitality segment for attracting more people across the world. It will help the TUI business to expand and grow their business. On the other hand, the public sector is not impressive in the field like waste disposal, water allocation safety standards for the local inhabitants which are the negative side towards the economy of the country. In case of Egypt the positive side of the economical factors is the key potentials of the Egypt which has increase the revenue generation of the Government. Around 2.7 million spending are from the foreign tourist which is increasing the capacity of revenue generation at Egypt. On the other hand the political unrest is declining the tourism in Egypt and nearly 95% of the tourism has declined which will affect the business of TUI group.

Environmental: One of the major in the attractions of Thailand is the beautiful environment that involves the islands, coral reefs; hot spots like East of Eden support the tourism to a greater extent. On the other hand the massive damages in the environment are worsening the sustainable tourism. Lack in the infrastructure towards the waste management is hampering the environment and the global business houses like TUI to flourish. The sand dunes, pyramids, beaches are the major attractions of Egypt and conserving the tourism is the main focus of the Government of Egypt (Ibrahim, 2011). Due to the unstable condition of the Government the maintenance of the sites are questioned. This may create a negative impact on the business of TUI Group.

Social impacts:The people of Thailand are very polite in nature and they value the tourism for the sake of their economy. On the other hand the unawareness among the people towards the transmitted diseases is high in Thailand. The spread of the disease like AIDS are influencing the tourist to plan the trip of Thailand. The Government is not active on this ground which can affect the tourism businesses of TUI group. In the perspective of Egypt some portion of the local communities and the people are showing their negative attitude towards the tourist in order to disturb the law and order of the country (Steiner, 2010). This has created a negative impact in the tourism industry of Egypt and will surely decline the business turnover of TUI group.

4.2 Explain strategies that can be use to minimise the negative impacts while maximising the positive impacts TUI Group businesses.

The negative impacts based on the economic, social and environmental factors on the countries Thailand and Egypt can be minimised by the following ways:

TUI group can form partnership with the organisations operating in those countries for maximising the service delivery process. As a result the business will grow for the TUI and they can achieve the desired revenue target in those countries.

In order to conclude the key historical developments in the travel and tourism sector of UK has been highlighted with the help of the structure where the private sector, public sector and voluntary sector is very much active. Secondly the political change in the different countries and its implication towards the tourism sector is also discussed by showing the positive and negative side. Thirdly the factors affecting the demand of the tourism are shown with the help of the supply provided by the TUI group. Lastly the economic, environmental and social impact over the tourism has been shown with the help of strategies to overcome them effectively for increasing the growth of the tourism.