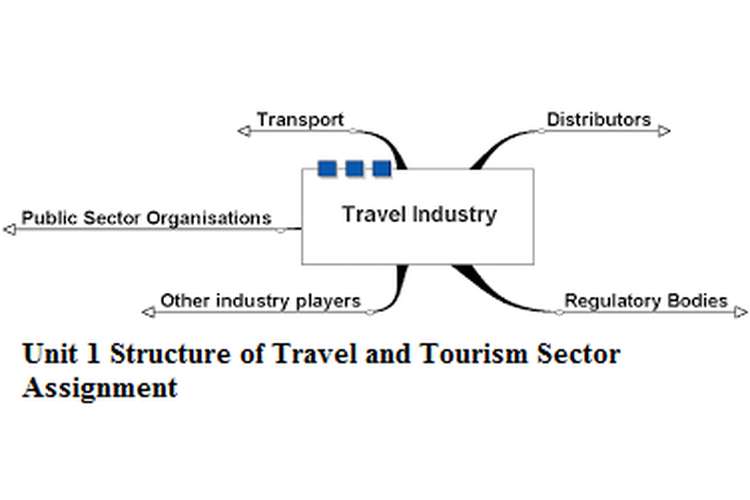 One of the main industries in the world today is the tourism sector. In 2001 the World Travel and Tourism Council indicated that ten percent and 1 in 10 jobs are created by travel and tourism sector worldwide.The assignment describes in its first task thehistory and structure of travel and tourism industry, in the second task the information about the influence of local and national government agencies and international agencies, in the third task the factors affecting demand and supply on the travel and tourism sector and in the forth task gives the details of the impacts of tourism on the economy and the environment.

P1. Understanding the history of travel and tourism sector

Each year places like Buckingham Palace, the Tower of London and St Paul’s Cathedral are visited by millions of tourists as London being one of the world’s leading tourism destinations attracts around 30 million visitors every year. In this task we are going to get a brief about the history of travel and tourism industry in London. The modern day tourists visit the above mentioned places the most but what were the places where the tourists of 19th century would have visited and what are the factors that helped travel and tourism sector to evolve.

P1.2 Explain the structure of the travel and tourism sector

P2. Understand the influence of local and national governments and international agencies on the travel and tourism sector

2.1Functions of government, government sponsored bodies and international agencies on travel and tourism

“For the first time government has a tourism strategy that reaches right across Whitehall, looking at policies from a tourism perspective. From cutting red tape on business, to visa applications and airport queuing times, planning and infrastructure, this strategy encompasses all the areasthat have big impact on both the people holidaying in this country and the  business organisation  so vital to the sector”. (David Cameroon, 2011)

Development of the destination for its people and their future:

The WTO has made efforts recently to strengthen its links with commercial and non-government partners through its system of affiliate membership which should help in the provision of practical guidance and as a basis for cooperative action. (Penrose, 2011)

2.2 Influences of local and national economic policy on the success of the travel and tourism sector

The success of the travel and tourism sector is influenced by the economic policy in a number of ways.

Secondly, economic policies of the government which affect the tourism indirectly. Monetary policies of the government are mostly not aimed at tourism industry, but these monetary policies cause a fluctuation in the exchange rate of its currency, and if the currency falls, tourism will eventually increase because the vacation in the country will become less expensive for people in other countries.

2.3 Implications of political change on the travel and tourism sector in different countries

Tourism has been proclaimed the largest industry in the world. “According to the World Tourism Organization, international tourists’arrival reached 922 million worldwide in 2008 and isforecasted to reach 1.6 billion by 2020. As such, tourism is acknowledged as an important economic sector for many countries.”(Suntikul and Butler 2010)

Change is normal in politics as it is in tourism. Politics and tourism share a relationship consisting of relatively small sub-field of the social science of tourism. Tourism is affected by global economic and political trends and relation between nations. In recent years, tourism has become closely implicated in political action and activism and the reason is that tourism is now seen and used as a tool for economic and political change. Tourism is used to initiate political discussions, increased pressure for fair trade and poverty reduction through tourism clearly reflect the growing link between these two fields. A greater politicisation of tourism has happened with a complex political context. The economic and social consequences of the fall of communism in Eastern Europe and the adaptive re-invention of Communist societies in Asia continue to have repercussions on the global stage and at the level of specific destinations within these regions, as does the rapid changes in the European Union.

Earlier this year UK voted out itself from the European Union. This political change is going to affect the tourism industry of UK. The number of visits by Europeans to the UK is more than double that of visits from residents in the rest of the world. European Union states are now requiringhaving visas to travel to UK likewise Britons travelling to European Union are required to have visas. For e.g. if a French family is looking to visit Spain or UK,there are pretty much chances of them choosing Spain over UK where they would not require visas, no extra costs.  (Mason, 2015)

P3. Understand the effects of supply and demand on the travel and tourism sector

Tourism demand can be defined as a term which covers the factors governing the level of demand, different types of demand, important characteristics of demand and the motives behind making such demands. Demand is defined as “a schedule of the amount of any product or service that people are willing and able to buy at each specific price in a set of possible prices during some specified period of time”.(Cooper, 2004)

Individuals are responsible for generating tourism demand in a particular place called “tourism destination”. Seasons and time are some factors which affect the demand of tourism industry.

Tourists directly involved in the actual process of tourism refer to the actual demand or also called effective demand. Two categories of people who are unable to travel due to any circumstances. The first category of people includes the potential travellers who may travel at a later period of time and are not able to travel at the current point of time. Second, the people who postponed their travel due to problems in the supply environment which is known as deferred demand. Latent demand which is of third type relates to the spatial and temporal expression of demand at specific destination. Some factors which motivate people to travel and create a demand for tourism industry are leisure, holidays, business and professional engagements,  health and care  treatments, religious pilgrimages or other personal motives. These factors create a demand for accommodation.

Depending upon the economic, psychological, geographic and political factors tourism demand could be defined in various ways.

Other factors which affect the demand for tourism are described below:

3.2 Changes in supply to meet the effects of demand

Tourism supply has to do with the provision of the key elements of the tourism industry with the provisions of the key elements of the tourism industry by the host governments or destinations. Natural to man-made resources are required for tourism supply. Telecommunications, accommodation and transportation are the infrastructure required in tourism industry. Travel agencies, tourist offices, visitor manager and hire companies are other services required in tourism industry. A concept of “tourist supply chain” originated from economics which is used to explain how different businesses enter into contractual agreements to supply services, products and goods. A wide range of suppliers providing services to the tourism sector are well suited in the supply chain.

P4. Understanding the impacts of tourism

4.1 Evaluation of positive and negative economic, environmental and social impacts on tourism

In developing countries and rural areas, tourism brings many social and economic benefits, but negative effects are also associated with mass tourism. The positive and negative impacts of economy, society and environment are discussed below:

4.2 Strategies that can be used to minimise the negative impacts while maximising the positive impacts of tourism

Poorly managed tourism can severely impact the environment of a tourist destination. A new form of tourism known as eco-tourism is being adopted worldwide which is sustainable for the environment as well as beneficial for the local population.

Some strategies are discussed below by which the negative impacts of tourism are reduced:

On the other hand tourism brings many positive benefits which could be maximised to improve the sustainability of the environment. These impacts are listed below:

Sustainable tourism can turn poverty areas into thriving economic development zones and also significantly increase the revenue of the tourism business. Tour operators, hotels, resorts, and destinations can contribute towards sustainable tourism, thereby reducing poverty, improving the lives of people and improving the environment which would lead our world to a more sustainable path. (Michael, 2016)

Tourism is a  fast growing industry in the world due to the diversified culture of the world. The modern man wants to explore new horizons in terms of travel, and the tourism industry develops by creating a large number of jobs throughout the world. International travel and tourism is the backbone of  market globalization  and enriches the world in many ways: It promotes economic growth, increases trade, advances development, and creates higher disposable incomes. Throughout this study we understood the the tourism industry in detail and the different factors which affect the working of this sector. The current assignment gives the detailed study of the tourism sector and the influence of various segments on the sector. The effect of supply and demand on tourism and the impacts of tourism is also described the assignment.