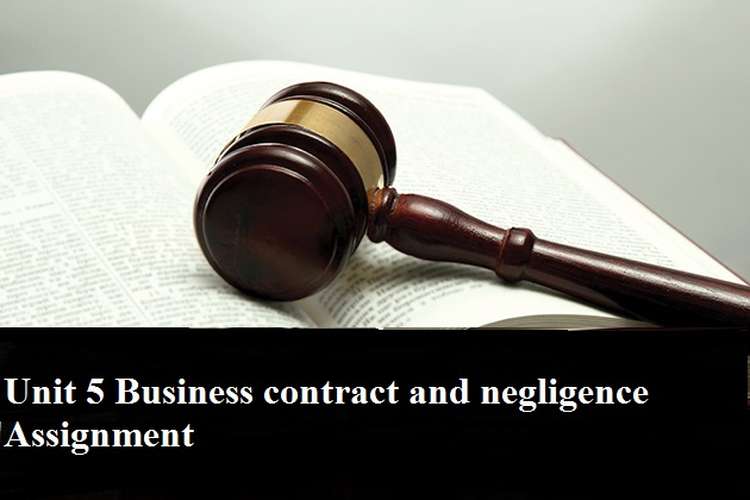 This Unit 5 Business contract and negligence Assignment aims to identify the aspects of contract laws and tort laws. Furthermore the report also checks the applications of these laws in various different business strategy. To avoid basic complexity the report is divided into four basic parts. The first part of the report or the task 1 tries to increase the basic knowledge about business contracts. Therefore the task 1 is further divided into three parts. The first section of the task 1 helps Peter Abraham, a self-employed building contractor understand the format and basic elements of business contract. In the second section task 1 defines the impact of various types of business contracts. Finally in the third section task1 analyzes different definition of terms for business contracts considering the remedies and damages. The first section of the second task or task 2 identifies application of contract elements in two given cases. In the second section of the task 2 the terms of contact laws are defined considering two cases. Finally the third section of task 2 evaluates the effect of contact terms. The first and second section of task 3 shows the differences/similarities of tort and contract liabilities as well as negligence of liability with example respectively. The third section explains vicarious liability with example. The two section of the task 4 applies the terms of tort and terms of vicarious liability in given cases respectively.

1.2Discussion on the impact of contract formation:

According to the business laws contracts are formed considering the formation, consideration, execution and type of validity. But the basic types of contracts reflect all the four factors of the business law. They are given as follows:

Face to Face: Tis type of contract is also known as verbal contract. Therefore the use of telephone, voicemail etc are entertained in this case. The major negative factor of this type of business contract is lack of documentation. Moreover this type of contract has no evidence to show in case of negotiation or counter-offer issues(Buchanan, 2014). The basic thing about this contract is it is based on oral conversations and therefore can increase complexity and difficulty during any fraudulent activities or breaches.

Written: Written contract has full documental nature where all the terms and conditions are given and documented in a clear and precise way. Moreover both the offering and accepting parties have copies of same signed contract as proof. A written contract is valid for individuals, organization behaviour or business parties(Aubert and Rivard, 2016). The power factor of this type of contract is both parties have written agreement copies for further movement. The sign of both parties is crucial in this case. Therefore the parties should sign the agreement copies after total understanding of rules and regulations.

Distance selling: This type of contract is the result of modern technology usage. Therefore this type of contracts are entertained via phone, email, audio or video recording. So the contract can be verbal or written. In case of verbal distance selling contract the agreement is made via phone or chat box without any evidence or recording evidence from phone and snapshots of chats(Jenkins, 2014). In case of written distance selling contract the agreement is signed via digital signature and both parties keep one copy of signed agreement as proof of valid contract. Moreover in this case the offering party sends rules and regulation of service or goods with all details like cancellation, refund and exchange etc. The accepting party can accept after consideration with digitally signed copy in case of written contract.

According to the business law any basic business contract may have the following terms of definition. 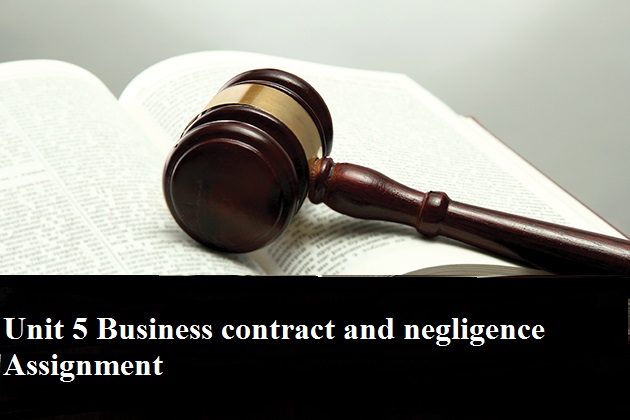 2.1 Application of the contract elements:

Case Study (2):Devi is an independent person and had interviewed with a well-known IT firm called George, Smith & Fogarty, Inc. The firm sent Devi offer letter on 12th April, 2015 and Devi accepted it. Devi’s father Preston sent a letter to the firm offering a donation (£150,000) on 13th April if they hire his son. After receipt of the same George tries to enforce the letter against Preston.

2.2 Application of the contract laws:

Case Study (3):A popular London restaurant table booking for a couple is gone wrong when the male (couple) find that money is removed from his wallet while he is trying to pay. He has handed over his coat (wallet was inside coat pocket) at the entrance man of the same restaurant. According to the porter the back of the receipt has exclusion clause which indicates that valuables must be removed from the pocket. Therefore according to restaurant the man (couple) cannot demand his stolen money.

Case Study (4):Zehphra has given his warehouse in rent to Aaron and Aaron made some improvement of the warehouse. Due to this improvement Zehphra promised Aaron a fixed rent of 5 years. But after one year Zehphra died and Yeti inherited the same property and now the rented property of Aaron shows an increase in value due to Aaron’s past improvements on the property. Therefore Yeti increased the rent and Aaron refused. Finally Yeti terminated the tenancy while Aaron sent a bill claiming his past expenses and Yeti refused.

Case Study (6):A motor insurance policyholder answers two questions of car or parts modification and involvement in accidents in previous five years as negative. But according to insurer’s observation (on a new claim) the car is fitted with oversized equipment and the policyholder’s husband had two previous claims in past five years. According to the insurer the husband’s name is in the insurance form as a driver. Therefore the insurance policy is terminated while the claim is taken as void. According to policyholder she was not aware of car modification during buying and her husband’s previous claims.

Similarities:However both the laws have some similarities. They are as follows:

3.2 Explanation for liability of negligence:

The word negligence comes with the most fundamental meaning as careless attitude. In business terms or business law terms the same means failure to maintain certain standard in case of duty or exercise considering the ambience and environment. The liability of negligence is based on some factors. According to legal business terms they are:

Moreover this factors or conditions if come out valid according to the business law then together they work as proof against the defender (Pourand Sharafatpeima, 2016). As an example if a customer gets infection from new underwear due to the high amount of sulfur in the same and as a suffered preson can prove that this is a ‘liability negligence’ from company’s side then the company has to give compensation. In this case duty was to wash the sulfur before packaging but breach of duty defines that company has not done so. Therefore the exact and immediate causes include forgetting attitude and high demand of the product. Finally level of damage or the infection is valid damage level and the customer can seek penalty according to business law.

According to the terms of business law vicarious liability is a type of secondary responsibility where someone else is taken responsible for some other person service’s action. Most of the organizations and primary business culture face this issue in the internal and external level of communication. As an example if two companies have a contract of product supply considering a date and the supplier company reach to the product company’s outlet with a delay(supplier’s personal delay) then the supplier company’s representative is not the trouble maker according to business law (Arlenand Carney, 2012). As a representative and employee of the company the supplier’s delay affect the supply company in vicarious liability case and the product company may take action against the supply company for delay. According to the case study of Lange verses Nabisco 1969 vicarious liability comes with the same result. Therefore the conditions for which any person or organization have part in vicarious liability issue are as follows:

More specifically in an organization the vicarious liability conditions are:

As an example if the RND department of a product company’s lab(external/lab used by other firms) is damaged due to working negligence of the current employees in the lab then according to the working hour, presence and action capacity proof the responsibility of the damage goes on the product company.

Case Study (7):Mr. .Brown had gone to Goodmayes hospital with chest pain and breathing problem. On his complain the nurse called the doctor on duty and doctor prescribed some painkiller over the counter. Mr. Brown died from Pneumonia caused from toxic mould the very next day in his house.

Case Study (8):An executive chauffeur company’s driver picked up a client from airport. The driver was drunk while picking up the client and consequently crashed the car in a lamppost causing serious injury to the client. According to investigation the driver was over the ‘drink driving’ limit.

Case Study (9):Mr. Jones a delivery driver of an Essex supermarket slipped on the tail gate of the truck and drops the pallet on a colleague. The colleague was highly injured and after months of suffering he sues the supermarket for damage. According to the defender (Supermarket) the health and safety responsibility was in the hand of a third party during the accident.

The report is divided into four principal parts to define contract fundamentals according to business law. In the first task Peter Abraham identifies the basic terms, conditions of a contract via business law. Furthermore in the second task the report identifies the elements of contracts and type of breaching using some suitable case examples. Third task identifies the similarity and differences of contract and tort and further discusses negligence and vicarious liability with examples and conditions. Finally in the fourth part or task the report analyze application of tort and vicarious liability using suitable examples. From the report and examples the conditions, terms and elements of contract, tort and liabilities come clear.