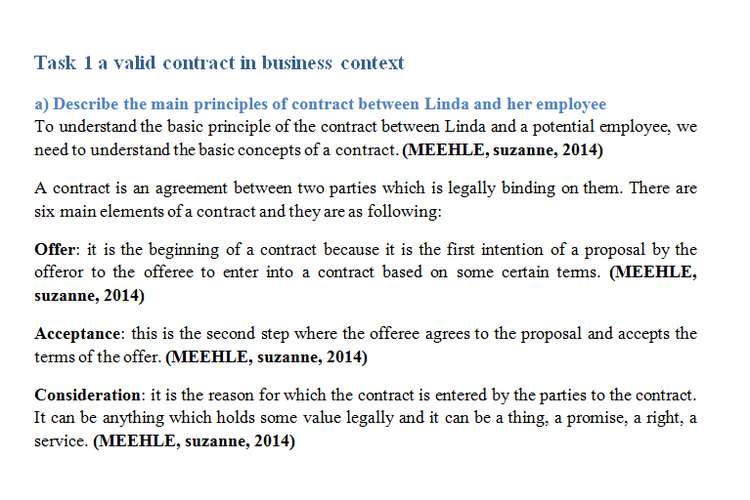 Understanding Aspects of Contract and Negligence of Business

The report presented here with comprises of different types of contracts in different business strategy. Firstly, it gives a detail explanation on employment contract which is between an employer and an employee, as to what are the contents of employment contract, what are the duties of both parties under such contract, and how the law gives enforcement on breach of those defined terms in contract. After that, the report explains the contract between a buyer and seller as to what terms and contents of their contract are binding and what liabilities are imposed on parties for breach of those agreed terms. These contracts are mainly a part of the business run by one person known as the sole trader. The report further explains the registration and dissolution process in sole trade. Finally, the report ends by giving a clear understanding on all parts of the contract and on all types of businesses.

b) Legal terms that should have been entered into the contract

There are some terms those form an important part of the contract. The terms have been discussed below:

c)  How can Linda Tackle the attitude of the wholesaler with the help of the law of contract.

In the present scenario, Linda can take the help of the Unfair Contract Terms Act 1977, which protects the innocent party from unfair terms. According to this act, a term that gives a better bargain to one party and a term which puts more rules and responsibility on one party will be considered as an unfair term. This act also deals with exclusion clause which says that a party cannot exclude itself from death or injury caused due to any reason, from injury or damage caused due to negligence and also from the liability that arises from faulty goods (E-LAW RESOURCES, (n.d.)).
In the present scenario the products of the wholesaler are of bad quality so he cannot escape from the liability of the faulty goods and also he cannot force Linda to continue to use the coloring agent which is causing injury to people in the form of allergy. Therefore in the light of The Unfair Contract Terms Act 1977, Linda is not bound by the unfair terms and the wholesaler is liable to give a refund or replacement of the bad quality product, and also Linda can terminate the contract.

For complete copy of this solution, order from  Assignment Help