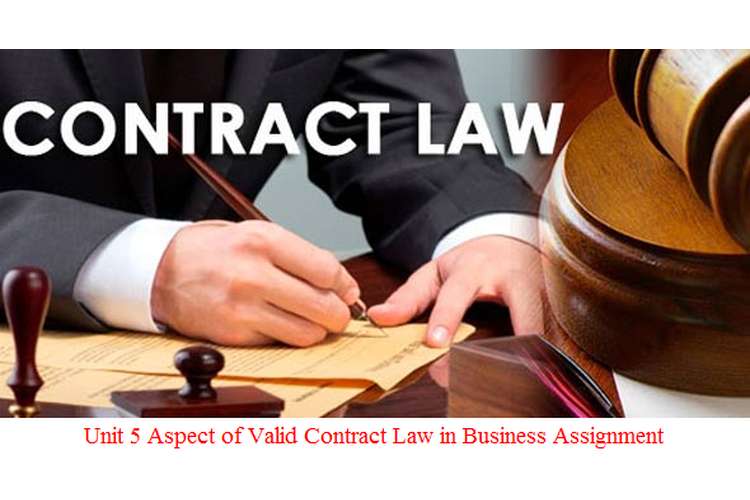 This Unit 5 Aspect of valid contract law in business assignment is focused on the fundamentals which are required to formulate a valid contract.

1.1 Explain the essential elements required for the formation of a valid contract

Initially, an agreement is formed with the help of offer and acceptance and this agreement is when joined with intention, consideration and capacity makes an enforceable contract. An offer is the intention of an offeror transferred to an offeree and is expected to be performed by an offeree (Harvey v Facey [1893].  An offer can be communicated to one specific person or group or world at large but must not be vague in nature. (The Law Teacher, 2016) The approval of an offeree to the terms of the offer without bringing any changes is called acceptance in law (Entorres v Miles Far East [1955]). It is complete and binding when reaches to the notion of the offeror. (TA Street, 1999) The parties should have legal intention when an offer and acceptance is made. Legal intention signifies that the contract is enforceable through the court in situation of disputes. Intention is presumed to be present in commercial undertakings and absent in family relations but can be rebutted by laying down evidence. The parties making offer and acceptance should have attained eighteen years of age and must be sound mind. The promises should be accompanied by some kind of benefit/gain called consideration which makes a contract enforceable in law. Lack of consideration results in making the contract gratuitous.

1.2 Explain and discuss the impact of the different types of contract

Compliance of contract fundaments results in making various contracts. The same are:

1.3 Explain and analyze the different forms of contractual terms

Numerous terms are exchanged amid the parties when any contract is made. These are:

Express terms and Implied terms-When a contract is made then those terms which are jointly and expressly made part of the contract are express in nature. The parties discuss all the integrities of the contract and then mutually incorporate the express terms. The terms in which the parties have no role to play and are bound to be performed under law, usage or custom are implied. These are equally important as express terms the non-compliance may result in penalties AttorneyGeneral of Belize v. Belize Telecom Ltd. (2009). (R Thomas, 2015)

Conditions, Warranties and In-nominate terms-There are three categories in which the contract terms can be divided depending upon their meaning and effect.

Exclusion clauses-The clauses which are made part of the contract and which limits/excludes the liability of some party to the contract then such are exclusion clause. The clause is valid when are incorporated at the will of both the parties. If only one party is incorporating then he must make every effort to bring the clause in the awareness of other to make it binding L'Estrange v Graucob [1934].

2.1 Apply the law on essential elements to the scenario

In business law,  an offer is the intention of an offeror transferred to an offeree and is expected to be performed by an offeree (Harvey v Facey [1893]). But, instead of an offer when a person tries to invite offers then it is called invitation to treat. Offers are then received which when approved by the inviter results in contract. In Partridge v Crittenden(1968) an advertisement is an invitation. Thus, can the advertisement by City Car Dealers (CCD) is treated like an invitation. The answer is No, because in contract law, an invitation is different from a unilateral offer. In Unilateral offers, an offer is made with specification of how it is accepted. The conduct as per the requirements of an offer by an accepter is a deem acceptance and such kind of offers are unilateral in nature. In Carlill v Carbolic Smoke Ball Company [1892], an advertisement specifying the made of acceptance is unilateral. In the given case, a unilateral offer is made by CCD. The offer is unilateral because CCD has specifies the mode of acceptance and as also the cars are displayed to shoe the genuinely of the intention of CCD. Abel reacted on the advertisement acted accordingly, that is, he visited City Mountain on November 1, get a ticket and within three hours he returned to the showroom. Thus, his actions are an acceptance by conduct to the unilateral offer by CCD. Thus, an offer by CCD is accepted by Abel by conduct, so there is a binding contract between the two parties.

2.3 Evaluate what remedies are available to Eric

In law, the contract terms depending upon their meaning and effect are conditions, warranties and in-nominate terms.

As per the law, when the circumsttbces in which a term is breached decides whether it is a warranty or a condition are in nominate terms. The effect of these terms depends upon whether the term breached is treated as a condition or as a warranty. So, the terms which are contract root are conditions and if not complied with then plaintiff can sue the defaulter for compensation and can rescind the contract  (Poussard v Spiers (1876). But, when the terms are not contract roots then they are warranties and if not complied with then the plaintiff can sue the defaulter for compensation only  (Bettini v Gye (1876). Now, the car provided by Rani has breaks which are faulty. This breakage has resulted in the non-performance of the car and is thus a very essential requirement in any car. So, a condition is violated. So, Eric can claim compensation by rescinding the contract.

The liability in tort and contract are both civil liabilities as both have originated from civil laws. Yet, the impact and effect of the liabilities of both the laws is different. (Bar et al, 2004).

The liability in contract is amid the parties who are not strangers but the parties are unknown to each other in the law of tortuous liability, Thus, these are some of the significant difference amid the two.

3.2 Explain the nature of liability in negligence

The law of negligence is a civil law which imposes burden on the defendant who fails in fulfilling his duties which are imposed upon him under law and which causes harm to a plaintiff because of such breach. There are three basic principles which must be followed in law to make any defendant to be held negligent.

3.3 Explain how a business can be vicariously liable

4.1 Apply the elements of the tort of negligence and possible defences which could be used by the defendants

4.2 Apply the law on vicarious liability to the scenario