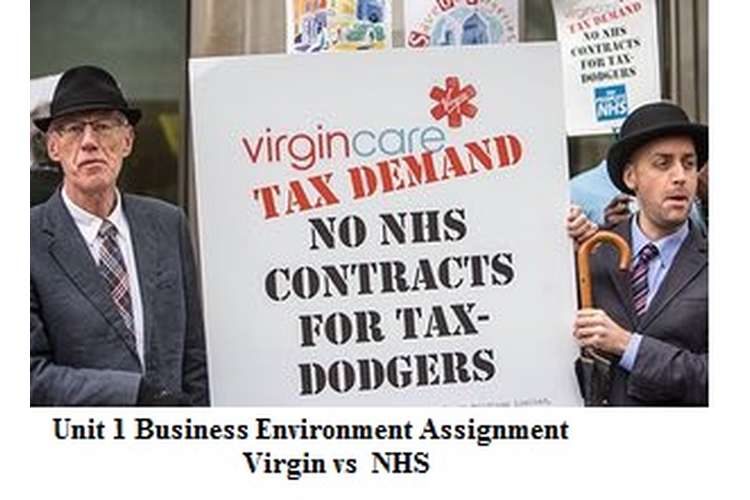 This Business Environment Assignment – Virgin vs NHS is about the business and the business environment in which two companies comparison is presented in the presentation one being a profit company Virgin Group and other being a nonprofit company called NHS. Apart from that organizational structure of the Virgin group is explained in an effective manner. Also this company external macro factors are analyzed by the PESTEL and the internal analysis is conducted by SWOT analysis. Apart from that company’s reflective statement is also mentioned that would help to analyze the performance and aspects of the company. 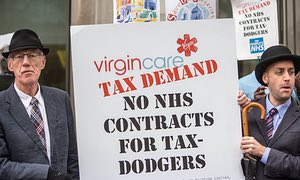 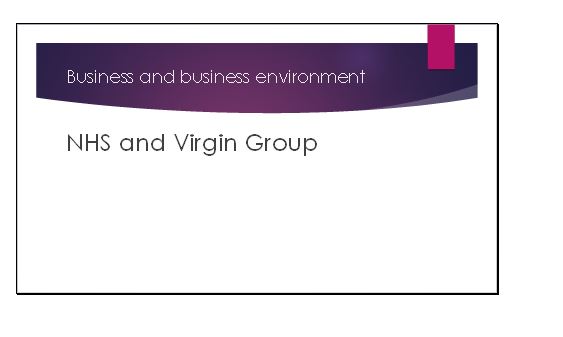 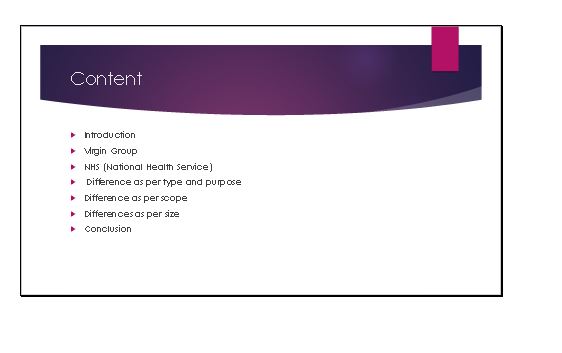 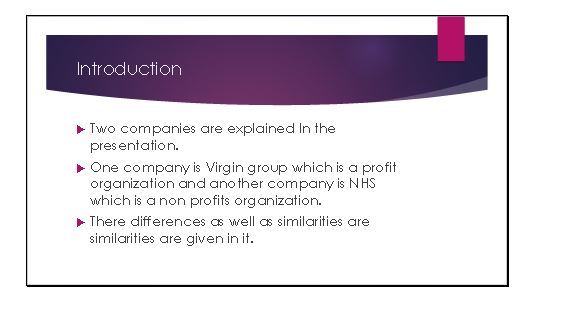 This presentation is about the two companies who have different motives as well as objectives as one is a profit motive company called Virgin whereas another is NHS which is non profit organization. 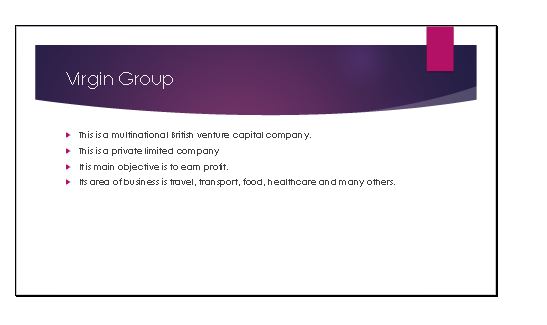 Virgin group is a multinational company that is also a conglomerate run all the working with the motive to earn profits. It is also a private limited company so no public involvement is present in it. It has many key areas for the functioning. 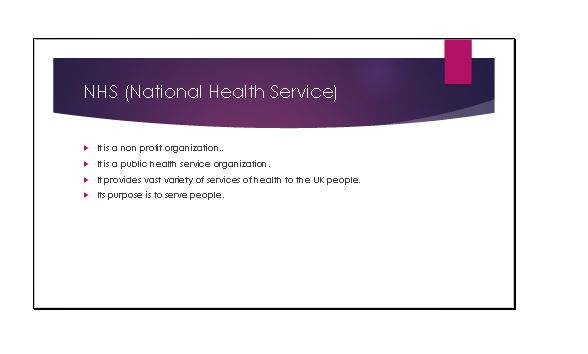 NHS is a non profit organization that works with the motive to serve the people and provide better health services at the reasonable amount to the citizen of the United Kingdom. This organization is also accountable only to the Government. 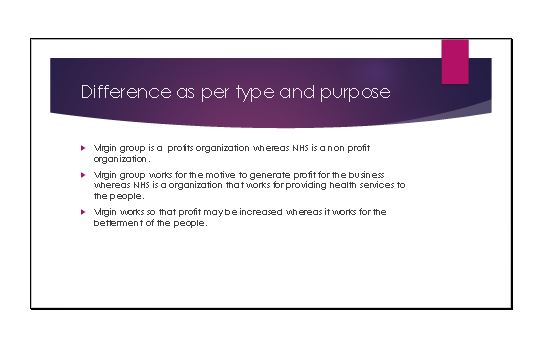 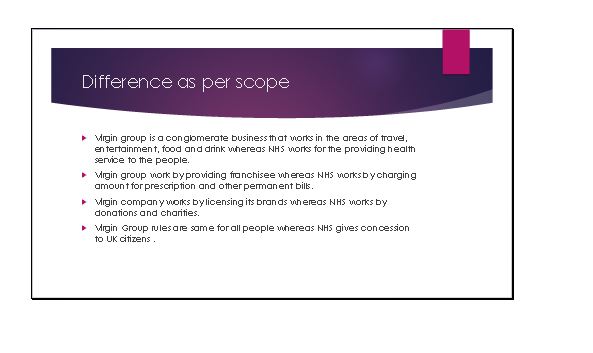 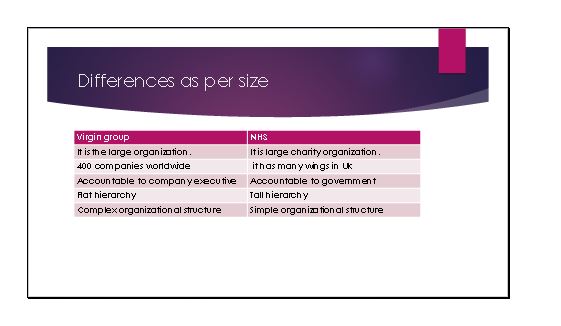 As per the size virgin group is more large with more than 400 companies world wide with the very complex organizational structure. It also has a flat hierarchy. But NHS is a charity organization that run its operation in UK only and are accountable to the government. They prefer tall hierarchy in its structure of organization. 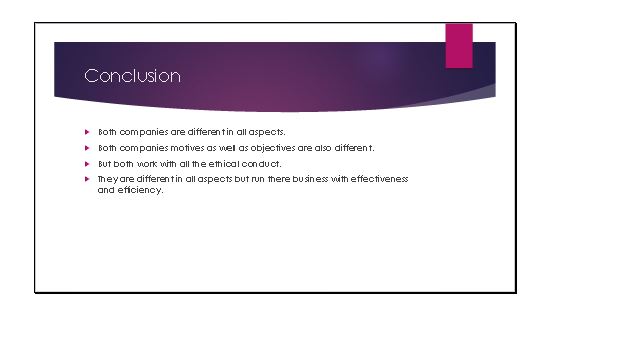 At lat it can be concluded that both company motive as well as objectives are different but they both work with all the ethical standard so that a better and effective economy as well as society ay be created in the world. 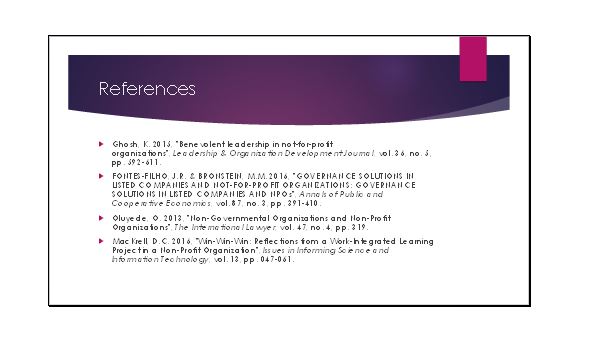 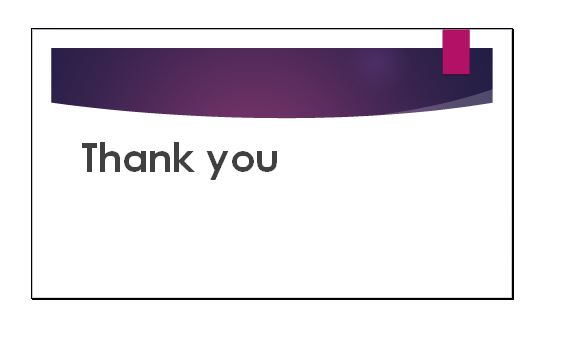 Disadvantages of the functional group in the Virgin Company

Virgin group is the conglomerate business that is based in many countries with its head office at London, United Kingdom. Operation of this business is affected by several external factors that can be better understand by analysis by PESTEL. PESTEL stands for political, economic, social, technological, environmental and legal. With these factors all the working of the company affected

This Company works in different countries and each country has different legislation and political background. Company has made all adjustment as per the legislation of that particular country. Branson is the complete owner of this company but has also the owner of some other subsidiaries of other equity. He has licensed his brand to different countries like virgin mobile, radio etc. but sometimes due to political changes company required to make adjustment which required proper time and efforts. But then also with the political change all the aspects helps the company to deal with all the important situation (Bartels et.al,  2016)

Economic factors affect the economy in all respect as virgin group suffered with tough competition that affects there strategies to the maximum limits as company was forced to lower their flight rates to match up with the competition. There were many negative changes in the globalized economy that affects the planning of the company but with the strong brand image company has able to create its customer base irrespective of the tough competition as well as it also put great efforts on the marketing techniques as well as sales volume. But economic factors also enhance the performance of the company as with the great competition the level of quality also increases that at last is good for the company in every aspects.

Social factors contribute effectively in the various aspects of the business law as many polices are made as per the lifestyle trends, behavior of the customers demographics region and many other essential aspects as per the situation. With the change in the lifestyle trend company require to makes changes in there planning that requires enormous cost and efforts but this factor also helps to make the company work in the complex situation that at last helps the company to work with the great potential and techniques (Mayaka et.al,  2012).

Virgin group is a private company that works in accordance with the company’s act of the United Kingdom. It is important that all the rules and regulation is compiled in a proper manner as if they are not comply properly then penalties can be charged against it which ultimately affects the budget of the company. Apart from that there are enormous amount of rules and regulation that are also required to be fulfil by the company waste enormous time and efforts which leads to delay of important matters and projects (Belwal&Belwal, 2010).

SWOT analysis stands for strength, weakness, opportunity and threats. With this analysis all the internal weakness and strength of the company is analyzed in an effective manner. Also with this SWOT analysis Virgin Group company ability and difficulty may be analyzed in a manner that would help it to analyze all the factors and make imperative amendments for the better future of the company (Kolbina, 2015). The SWOT analysis is shown below

Virgin group has an effective distribution system that enables it to reach to most parts of the world without any difficulty and makes the effective working that helps it to increase the social aspects of the business. Similarly it also has a strong brand name that effect the economic performance of the company as with the good brand name company may be able to stand in the tough competition in the globalized market. Also the performance of the company is dependent on the reputation of the owner and Branson has a good reputation which increase the trust worthiness of the stakeholders which are related to the company. Company work in many dimensions and segment that increase the working criteria as well as increases the growth rate of the company that is politically effective for the company as company will be able to lead a long life that would be socially effective for the company (Sardeshpande& Pillai, 2012).

In relation to the weakness, company is more depended on the Virgin Atlantic that leads to the problem as if this segment do not able to perform well in future then there are chances that company may suffer a huge loss that would affect its market and economic condition as well as with the technological advancement company may not able to perform in an effective manner and would hamper its goodwill in the market. Many times company has suffered with negative publicity that ultimately affect the goodwill of the company that ultimately affects the performance of the company and would create a situation where it may not be able to stand in the market in an effective and efficient manner.

Virgin group is a private limited company that is also a venture capital that run many business with different market scenario and structure. Company run the conglomerate business in which many segments are run either by the ownership or by the providing franchise. Company has provided its franchise in Virgin radio, mobile etc.  Company has conducted its business in a different and unorthodox manner which leads to the success of the company. Company works with the motive of generating profit and make every adjustment so that it may able to achieve its targets in an effective and efficient manner. The leader of the company is Branson who has lead the company with its unique ideas and objectives. Company works in a dynamic environment so it is affected with all the external factors that causes changes in the company performance either in a positive or negative manner. Company works with all the correct approach so that no penalties may be charged against it. Its performance is also affected with the political changes but it works in a strategic manner that helps it to make correct approaches in it. In relation to the economic impact, company has made all necessary adjustment so that it may able to anchor itself in the competitive market as well as company has an effective system of distribution that enables it to work in a manner that would increase its performance in a highly competitive market. Company has to be more advanced in relation to the technological changes so that the latest technology may be adapted by the company in a better manner (Caiazza, 2014). Also company has to work in the aspect of the environmental aspects as there are some issues that states that company has not make enough efforts in relation to safeguarding the environment. Apart from it also has complied with all the legal formalities as it is a venture capital and it also provide franchisee to the company so company makes all necessary documents so that all the compliances may be completed without any penalties. Apart from the external analysis via PESTEL, company internal strength and weakness also plays an important factor in its success. As per the SWOT analysis, company has various strength like a strong brand name as well as good reputation of the owner which helps it to stand in the market. Apart from that there are certain weakness that is required to be overcome by the company so that it may able to walk towards the path of success that would help in the growth and success in the long run like company is required to invest there resources in other segments apart from the Virgin Atlantic so that a more diversified business may be established.

This assignment helps in the analyzing the company’s performance in various aspects and situations as in the presentation it can easily be understand that with the change in profits motive companies working also changes. Apart from that Virgin follow a complex organizational structure but then also it has maintained a good communication system and adjustment that helps it to stand in the market. With the PESTEL analysis all the external factors are analyzed that concluded that there are certain matter in which company would require to work more accurately along with the internal weakness so that this group may be able to conduct all the business strategy and operations without any difficulty and may also works on the path of the success on the long run.