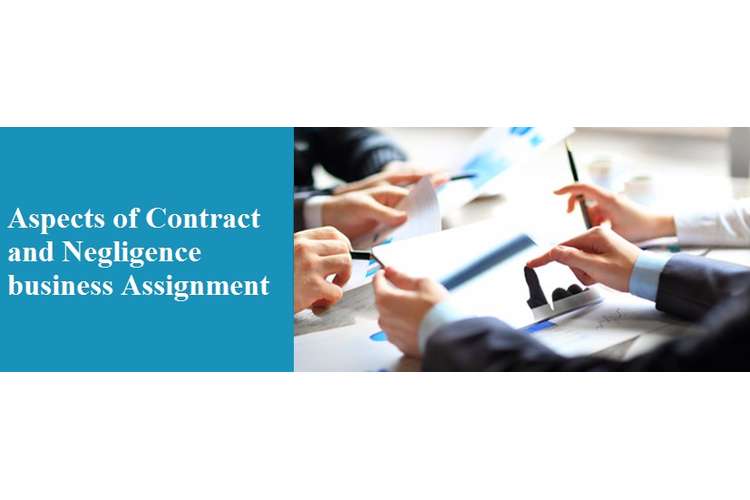 This Aspects Contract Negligence business Assignment is an agreement between the two parties that is enforced by law. Both the parties under the contract are ready to engage in the contractual relationship voluntarily. There are many types of contracts. The detailed explanation of the types of contract is given in the unit below. Many torts and unfair doings are associated with the contracts that are also discussed with reference to the case laws.

Task A: Identify the essential legal elements for the formation of a valid contract and explain their importance.

With the purpose of the contract every contract is being entered into by the parties. It is necessary that the reason for which contract is to be made should be common between both the parties. Hence, offer will be presented by the interested party to other party so as to enter into the contract. Terms presented for the contract should be clear to understand. Basis of the contract and the reasons for which the contract is formed must be presented in the offer (Collins, 2008). Invitation to offer is another aspect which is different from offer as offer is made for the purpose of entering into the contract; on the other hand invitation to offer is for providing the information and knowledge to the world that contract may be entered. Counter offer can also contrast offer. Offer is the statement made by the party which could either be accepted or rejected by other party to who the offer is made. Previous offer get null when counter offer is made but previous offer remains the base for counter offer. Counter offer is presented in order to suit the offeree.

Counter offer can only be formed in the case when offer is accepted. Person that has been made the offer may only accept it. To ensure that the contract could be made it is necessary to communicate acceptance to the offeror. Acceptance presented by the post will be considered applicable if and only if it will be posted (Cooke, 2007). Certain art of consideration should be there for a valid contract. Consideration is the amount that is provided by the parties so as to restore the losses so suffered under the transactions made by involved parties. Consideration involved in the contract should be in the form of profit, interest or promise. Consideration will be termed as valid if it passes all the criteria like it should not be of past nature, already a party of duty and sufficient.

Task B Discuss the impact of the following contract:

Task C: Analyse terms in contracts with reference to their meaning and effect.

Task D: Apply the elements of contract in given business scenario.

Present case study is about the information in which sale of East Midlands Airways Airbus was to be carried out. In relation with this sale an advertisement was posted under aviation trade journal on 15th October 2010 for the cost of 10.4 million pounds. In this case the advertisement posted by the seller will be considered as the invitation to offer as seller wants to invite the offer for the advertisement made for the sale of Airbus in industry journal (Collins, 2008). It was found that the CEO of Zulu Aviation Ltd. was interested in buying the Airbus. Therefore, in relation with the purchase of Airbus CEO of Zulu Aviation Ltd. telephoned the MD of East Midlands Airways so as to express the interest in the purchase of the same but at present he won’t be able to buy it. CEO of Zulu Aviation Ltd. made an offer to put off the sale just for 5 days as he would be available to pay the amount after five days. After listening to the CEO, MD of East Midlands Airways accepted the offer. In this case acceptance is shown for the offer made for not selling the Airbus and is not regarded for the purchase of the Airbus. For the contract the offer is made by the CEO and accepted by MD of EMA for the price of 100,000 Pounds. In this case the contract was entered into by the parties having the capacity and the commercial nature of the contract make it enforceable under the law (Giliker, 2010)

In the case the contract determines that 300 mobile phones will be bought and will be immediately used in UK. There are several circumstances that are to be determined so as to determine the nature of the term discussed about:

In this case it could be determined that the car of Cathy was handed over for servicing to Brakes Ltd. In previous services Cathy was made sign to an exclusion clause regarding the injuries caused due to malfunctions in car after servicing. At every service this was done by the Brakes Ltd. Due to certain reason this time Brakes Ltd was unable to provide the condition and the same was not signed by Cathy. But at the time car was handed over to Cathy a slip stating the same condition was provided to her (Pratt, 2000). After receiving the slip and the car after servicing a way back to her house she loss control over the car and crashed into the tree which cause damage to the car and injuries to Cathy. In the investigation it was found that Brakes Ltd forgot to connect the transmission of the steering mechanism. In this case Cathy did not sign the condition but due to the previous acceptance of Cathy she cannot make any claim for the damage from Brakes Ltd. According to the law exclusion clause are entered either through signature, previous course of dealings and choice.

In this case previous instances were included in the same manner the time of the accident will also be included. However, according to UCTA, 1977 AND UCTR, 1999 it could be determined that the exclusion clause made for the injuries or death is not valid and will not be enforceable under law (Richards, 2006). Therefore, it could be advised to Cathy that she may file for a claim for the injuries she had from the accident due to sub standards quality of the services provided by Brakes Ltd. According to Sale of Goods Act, it is necessary that the goods and services provided should be of standard quality which should be provided with the duty of skills and care. Therefore, in this case claim made by Cathy will be termed as valid.

1.Explain the nature of liability in negligence

We can consider the case of Caparo Industries. The three fold test was conducted to indentify the nature of liability. Determination of tort of negligence in this case considers three factors:

Proximity means the negligence towards the duty, causation means the effect of cause on liability and damage refers to the possible harmful result of the breach of duty.

2.Analyse the situation and advise Carlos and Janet regarding the tortuous liability.

The case of Donoghue v Stevenson can be considered to study the situation. This case very well explains the extent of liability. In the sale of goods case, the liability does not limits to the direct buyer but extends to the possible users of the goods because goods are not always used for self-consumption. (Nel, 2004)

Similarly, if we consider the case of Janet and Carlos, the dessert bought by Carlos has its effect on Janet who was the indirect consumer. Therefore, the restaurant is liable for the damages to Janet as well. It clearly explains extent of liability concept that suggests that the liability extends from the buyer of the goods to the consumer of the same.

1.Explain the nature of liability of Tort of professional misstatement.

It is almost same as tort of negligence with the difference of the extent of the affect caused by the wrongdoing. The effect may be far reaching in case of misstatement as compared to negligence by action. (Vettori, 2007)

Vicarious liability arises when any third party has the control over the work or wrongful act done by the doer. In this case, the person who is not performing is liable for the wrongful act because he is responsible for the actions of that violator. This liability is only applicable on the delegated task and not on the personal doings by an individual. The vicarious liability is the most common in the relationship of employee and employer as the employer is answerable for the task that has been delegated to the employee.

3. Advice Angelina if she has any right and remedies against Christian Auctioneers or Brad.

Task J: Briefly explain the possible defenses in the case available to Christian Auctioneers or Brad.

The above case is about vicarious liability. The defense that may be made by Christian Auctioneer is that Brad, who was asked to give advice Angelina about the value of the furniture has made a personal statement about the valuation of painting. According to Christian Auctioneer, the act was not wrong, as Brad has given the personal advice. This not leads to breach of duty. Therefore, they are not responsible for the damage.

Brad may also give the reason in defense that he is not liable because it was a personal advice and not official one. Angelina should not rely upon that statement for making a auction decision. (Nel, 2004)

There are different contracts based on offer, acceptance and consideration. Contract may involve two or more elements that identify the nature and type of the contract. The violation of contract leads to liability for one or the other party engaged in the contract. Cases given are solved by studying the tort of negligence, misstatement and vicarious liability.