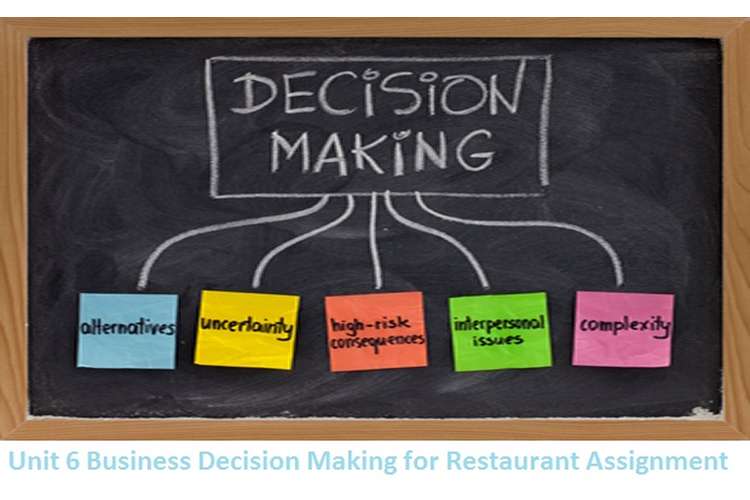 This Unit 6 Business Decision Making for Restaurant Assignment discusses the evaluation of data collected from the market sources for the making of decisions for a business containing the plan for collection of primary and secondary data related to the customer preferences and choices for opening a restaurant in London by an existing restaurant chain. In order to obtain the data questionnaire designed is also included. The analysis of data is also being made using quantitative tools and representation values along with charts and graphs. The project plan is also being made in this report by defining the critical path and analysing the data using quartiles, percentiles etc. A formal business report addressing the Board of Directors is also included to provide them relevant information using financial resources and tools such as discounted cash flow, net present value and IRR and evaluate that whether the project is financially viable or not.

Report on Data Collection and analysis

1. Select your age bracket from the following:

3. Are you a tourist/visitor or local resident of London?

4. What is your employment status?

5. Select your income bracket from the following:

6. What do you prefer the most while deciding about a restaurant?

7. Which type of food do you prefer?

8. How often do you go to a restaurant in a month?

9. Which type of restaurant do you prefer the most?

10. How far do you think the restaurants in London visited by you are successful in providing best quality food and services? Rate them on the scale of 5.

The data collected from the survey into the customer preferences from the target population which included the visitors at the restaurants in London consists of variety of responses received from different categories of target population which were 50 in number. In order to make decisions for opening a restaurant chain is London the responses received have been sorted and summarised.  The summarised data will be then used to draw conclusions and make analysis. The data collected and summarised is as follows:

The response to question of age group included

The responses included 32 male and 18 female candidates. Out of 50 responses 25 were tourists, 10 were visitors and remaining 15 were local residents of London. The employment status of therespondents was as follows:

The income bracket of respondents included the following:

The data related to preference in a restaurant is as follows:

The results drawn from the responses collected through questionnaire have been summarised as mentioned above. In order to draw conclusions for making decisions about starting a restaurant chain in London an analysis of the data will have to be made. For this purpose mean and median values of the data are calculated as follows: The data received about rating of restaurants includes responses as 5, 12, 20 , 7 , 6 whereas the responses of customer preference for a restaurant are 20, 7, 3, 10, 8, 2 for food, service, ambiance, cost, brand and others respectively.

Median – It represents the middle value of the collected data. It is used to calculate the qualitative results of the data for making decisions. It overcomes the limitations of mean. The median of the given responses is calculated as follows:

Mode – It represents the highest frequency of the given data. The mode of the data relating to given responses is as follows:

Measures of dispersion refers to the techniques which are used to make decisions by analysing the risks and variations associated with the average results calculated for the given data or responses. These techniques include standard deviation, coefficient of variation, correlation coefficient etc.

The standard deviation of 5.55shows that the mean calculated can deviate up to 5.55 on either side. Thus this risk of mean being different from the actual whether positive or negative. Thus the mean can be either 4.5 or15.5 and also it may be any value within this range. Customer preferences about restaurants 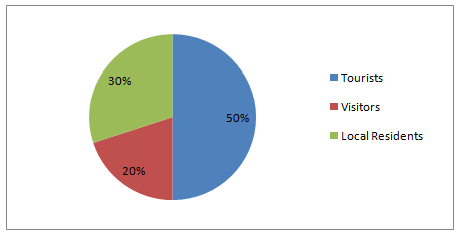 Analysis - The data related to the responses of the target population was gathered from the visitors of restaurants in London. The results showed that 50% were tourists, 20% were visitors and 30 % were local residents of London. It means that most of the population in London who visit to restaurants consists of tourists and visitors. Local residents of London seldom visit the restaurants. The population that frequently visits the restaurant also consisted mostly of tourists and visitors who belonged to different countries.

The data collection related to age group of the population is represented by the following chart: 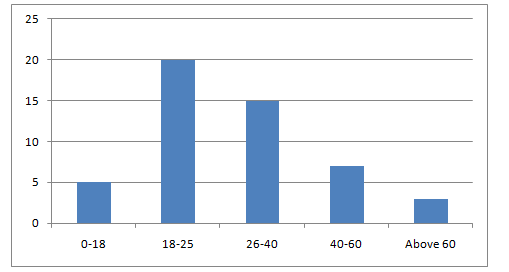 Analysis – The results of the data show that highest population who visit to restaurants consists of population belonging to age group between 18 years to 25 years. After this the next highest is the age group of 26-40 years. This means that most poufs the customers in the restaurant of London are young population who prefer to eat at restaurants instead of eating at home. Although the population also consists of elder people but the more focus of restaurant business shall be on the young population. (Ferres, 2013). The data related to the preference of customers while selecting a restaurant for having meals is represented by following chart: 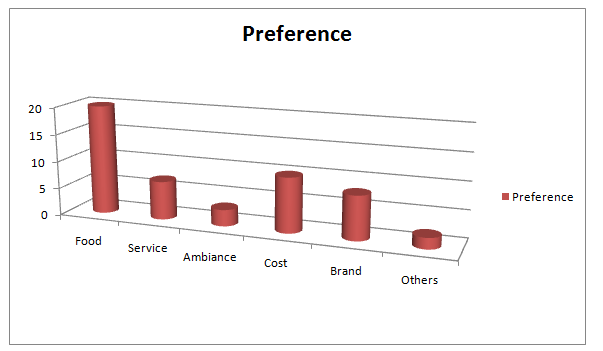 Analysis – The data collected about the customer preference out of food, service, ambiance, cost, brand and others show that most of the population believes that food is the first priority for deciding about a restaurant. After this the second preference is given by customers to affordable cost. Then comes the services offered and the brand name of restaurant. It means that the success of business of restaurant in London will depend upon the quality of food and services over other factors.

The ratings given by the population to the existing restaurants at London is represented by the following chart: 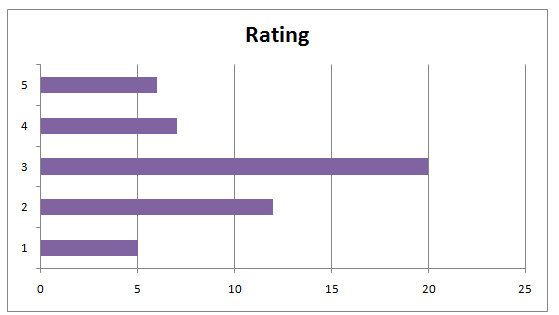 Analysis – The data shows that most of the population has given rating as 3 on the scale of 5 to the existing restaurants of London. This means that the performance of restaurants in London is average and thus there is good competition for the restaurants business in London.

The growth rate of restaurant sales in UK shows positive trend for opening a restaurant business which is represented by the following line chart with trend lines: 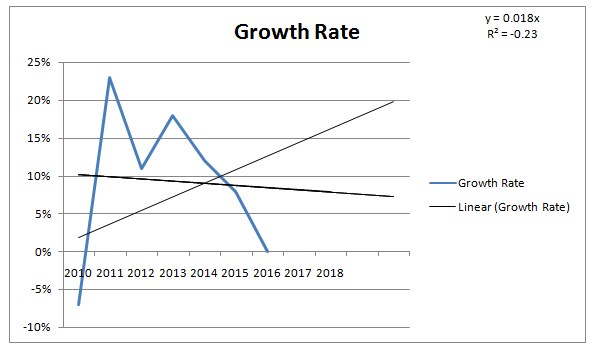 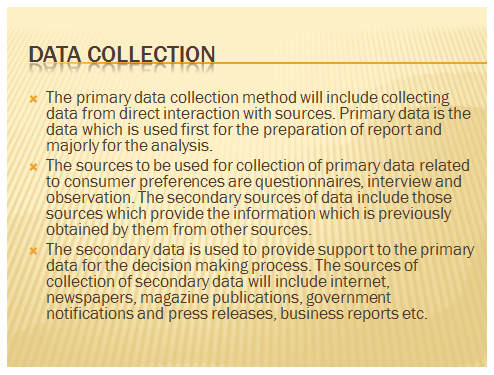 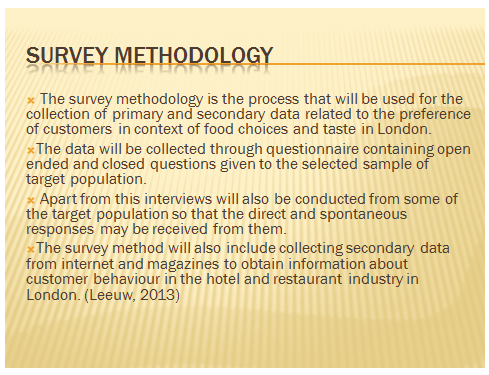 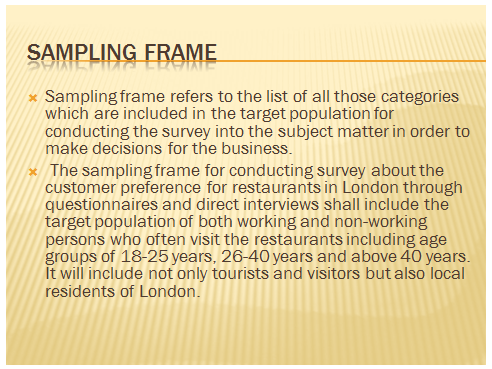 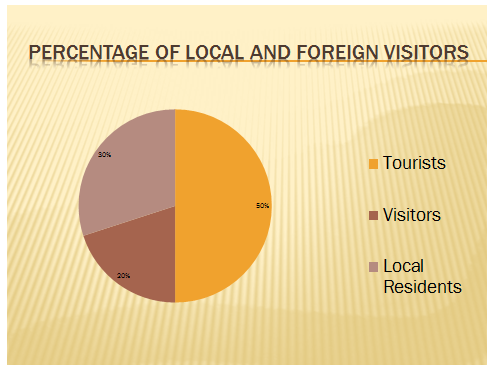 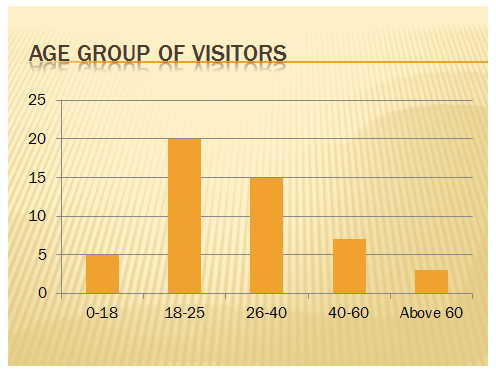 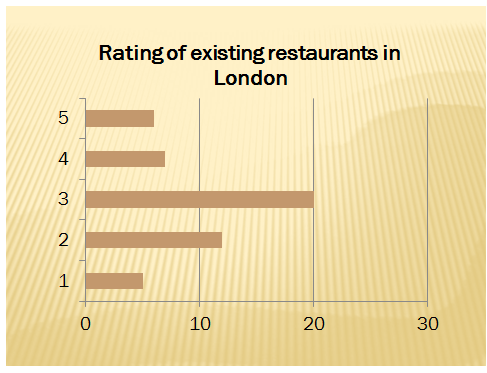 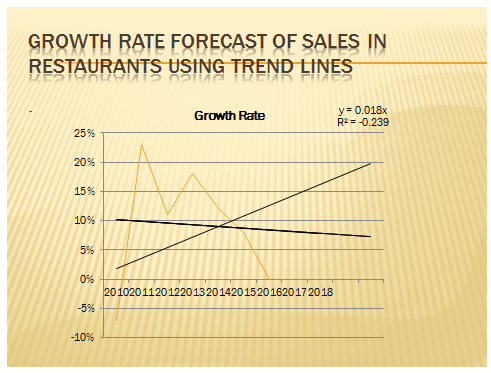 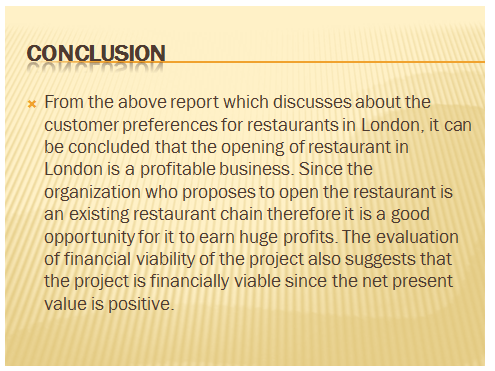 Subject: Presentation of information about potential of restaurant business in London.

It is to provide the information to the Management that a survey has been conducted into the customer preferences of the population who frequently visits to restaurants in London. The method used for collection of data was filling up of questionnaire by the population. The responses received have been analysed and valid conclusions have been drawn based on the analysis of data. On the basis of these conclusions this report is hereby prepared to provide relevant information to enable you make decision about opening the second restaurant chain in London.

The forecast of growth rates for the next two years of sales of restaurant business reveals that the growth rate is likely to be positive and the decrease is not much. Apart from this the ratings given by the customers to the existing restaurants in London is average which means that the market is competitive and success of business depends on the quality of food and services which has been given the highest priority by customers while deciding about the restaurant. Also most of the population who eats at restaurants in London comprises of young people between the age of 18 to 40 years. Thus more focus of the marketing and promotional strategy of the business shall be on this target population in the market.

Therefore the management shall consider the information provided in this report while making decision about opening a second restaurant in London. (Special Report, 2015)

The project plan consists of a detailed plan for the business process of restaurant in London to serve the customers. The different activities involved and the time taken by each activity in minutes is as follows: 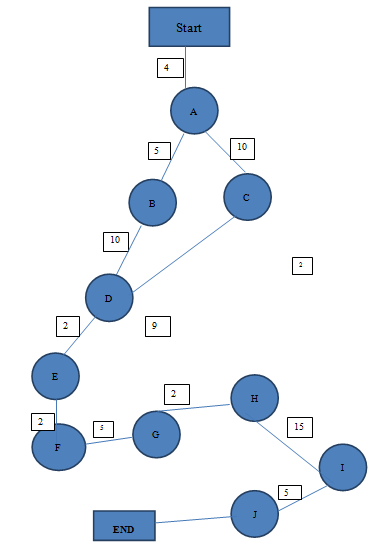 The project is having appositive Net Present Value therefore the investment can be made in the project. The payback period of the project is 3 years and 3 months which means that the project is capable of recovering the initial cash outflow within 3 months. (Abraham, 2014)

From the Unit 6 Business Decision Making for Restaurant Assignment which discusses about the customer preferences for restaurants in London, it can be concluded that the opening of restaurant in London is a profitable business. Since the organization who proposes to open the restaurant is an existing restaurant chain therefore it is a good opportunity for it to earn huge profits. The evaluation of financial viability of the project also suggests that the project is financially viable since the net present value is positive.

This Unit 6 Business Decision Making for Restaurant Assignment discusses the evaluation of data collected from the market sources for the making of decisions for a business, Locus Assignment Help UK posting units solutions so scholars can explore Assignment Help in UK and get review the quality of our work.