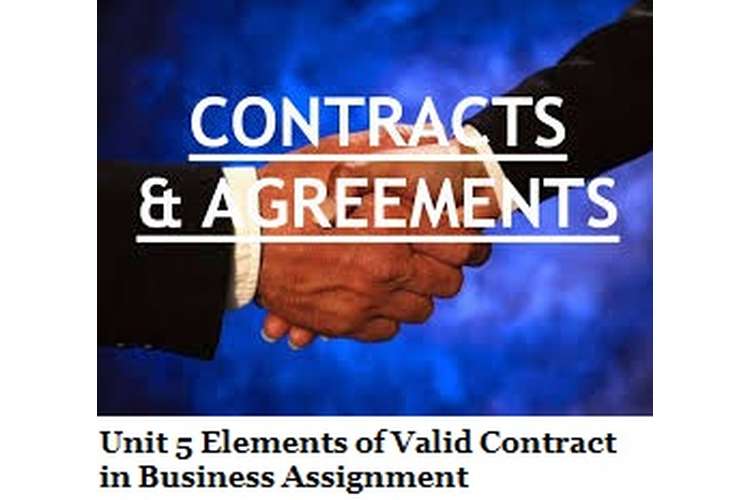 This is a solution of Elements of Valid Contract in Business Assignment in which we discuss controct law, types of contract,  contractual liability.

1.1Explain the essential elements required for the formation of a valid contract.

To make a contract requires presence of some basic fundamental which are called essential elements of a contract. The same are:
Offer is the first contract essential. An offer is a form of offeror intention which is conveyed to an offeree wherein an offeror wishes that his terms of offer are met by an offeree (Harvey v Facey [1893].  Both verbal and written forms of offer are valid. (Elawresource.UK, 2016)
Acceptance takes place when an offer is made to an offeree. When the offeree approves the terms of the offer then an acceptance takes place. It must correspond with the offer terms to be valid (Entorres v Miles Far East [1955]). (Elawresource.UK, 2016)
The offer and acceptance results in agreement. This agreement must be held along with some kind of gain or benefit which is called consideration in law. Consideration makes a contract legal and enforceable (Currie v Misa (1875). (The Law Teacher, 2016)

Also, the parties must be capable, that is, major and sound mind and should have legal intention to bind by the contract terms.
Thus, these are the contract essentials which are required in contract formation.

1.2Explain and discuss the impact of the different types of contract

Many contracts can be established with the help of contract fundamentals. The same are:

1.3Explain and analyze the different forms of contractual terms

When a contract is made by the parties then the terms of such contract, whether written or oral, can be distinguished in two categories, that is,

The terms can also be distinguished on the basis of importance that they hold in contract. The same are: (Beatson & Cartright, 2016)

2.1 Apply the law on essential elements to the scenario

Issue
Whether Abel was entitled to the car which was advertised by City Car Dealers?

Law
A contract is the combination of offer, acceptance, consideration, capacity and legal intention of the parties.

An offer is a form of offeror intention which is conveyed to an offeree wherein an offeror wishes that his terms of offer are met by an offeree ((Harvey v Facey [1893]). Both verbal and written forms of offer are valid. Acceptance takes place when an offer is made to an offeree. When the offeree approves the terms of the offer then an acceptance takes place. It must correspond with the offer terms to be valid. The Acceptance must be communicated by an offeree and must reach the offeror on order to be effective and binding ((Entorres v Miles Far East [1955]). (Elawresource.UK, 2016)

But, when unilateral offers are made then there is no need for any communication of an acceptance.  In Unilateral offers, an offer is made by one party and a prescribed mode of acceptance is mentioned. The offeree has to comply with the prescribed mode in order to depict his acceptance. The actions of the offeree are deem acceptance in unilateral offers. In Carlill v Carbolic Smoke Ball Company [1892], an advertisement is placed and the prescribed actions are mentioned by the company. The plaintiff has comply with all the due requirements which are considered as acceptance and a contract was established. The advertisement was considered as unilateral offer (though normally are invitation to treats as held in Carlill case) because the company has deposited money in the bank to show its genuinely. (Elawresource.UK, 2016)
The offeror must face the consequences if wishes to place unilateral offer.

An advertisement is placed by City Car Dealers. Normally an advertisement is an invitation to treat as per Partridge v Crittenden (1968) and Adel must place offer to the dealer.
But, in the given case, the advertisement is considered a unilateral offer by applying the law in Carlill case, this is because the dealer has laid down conditions which if fulfilled by any person is deem to be an acceptance. Adel has comply with all the terms such as, he was the first to run up the city mountain on 1st November, obtained a ticket and return to the showroom.

Further, all the three cars are placed at the forecourt of our showroom to show the genuinely to the public. Thus, the advertisement is a unilateral offer and not an invitation.
Adel has complied with all the formalities that are required to prove his acceptance.

So, Adel has accepted the unilateral offer of the dealer and thus there is a valid contract between the two. So Adel can sue the dealer for the enforcement of the contract.

Issue
Whether the exclusion clause made part of the contract is valid and applicable?

Law
The exclusion clause excludes/limits the liability of one of the party provided the clause was made part of the contract with the approval and consent of both the parties. The clause can be incorporated by signature or notice. If the party put his signature on the contract then the clause is binding irrespective of the fact whether the same is read by him or not (Wilton v Farnworth (1948).
But, as per section 2 of the Unfair contract Terms Act, 1977, a party cannot rely on the exclusion clause which excludes liability for death or personal damages out of negligence. (ElawresourceUK, 2016)

Thus, Eric brought a car from the showroom of Rani by signaling a standard form of contract which contains an exclusion clause ‘‘No liability is accepted for death, personal injury, damage to property or consequential loss arising from driving a car which is purchased from the show room’ . Since the contract is signed thus the clause must be applicable upon Eric.
But, since the clause is trying to exclude the liabilities which is in contrary to Unfair contract Term Act 1977, thus, the clause has no validity.
Thus, the clause has no legal significance.

2.3 Evaluate what remedies are available to Eric

Issue
What remedies that can be availed by Eric?

Law
The remedy for the breach of any contractual term depends upon the kind of term that is violated.
The terms which are basis/fundamental/root of a contract without which no contract can be performed are conditions and if they are violated then the aggrieved can cancel the contract and seek compensation (Poussard v Spiers (1876). But, the terms which are part of the contract but are not required for its performance are warranties and if they are not met then only compensation can be received by the aggrieved party (Bettini v Gye (1876).

Now, the car which is purchased by Eric is faulty in nature as the brakes of the car were not working. The main aim of buying the car was that it must perform the actions for which it has been purchased, that is, driving. But, this core term is violated by Rani.
Thus, a condition is breached, so Eric can sue Rani and can terminate the contract. He can also seek damages and compensation for the same.

3.2 Explain the nature of liability in negligence

The law of negligence is a law that was developed in Donoghue v Stevenson (1932) wherein the defendant was only held to be negligent when he was not able to fulfill his legal obligation resulting in causing damages to the plaintiff.

Thus, the liability in tort is fault based as it is only when the defendant has committed some kind of wrong that a liability is imposed upon him.

3.3 Explain how a business can be vicariously liable

In such situation, an employer is vicariously liable for the acts of his employee.

4.1 Apply the elements of the tort of negligence and possible defences which could be used by the defendants

Issue
Whether Dennis and Emma can sue George and the Restaurant for negligence?

Law
In order to make any defendant liable for negligent actions, it is necessary that:

Also, Emma and the restaurant are in proximate relationship with each other and Emma and Dennis are the neighbors of the restaurant. Also, the restaurant can reasonably foresee the loss which may be caused by providing the stale food.
Thus, there is a clear breach of duty of care by the restaurant resulting in loss to Emma.

So, Emma and Dennis can sue fresh Foods under the law of negligence.
However, fresh food can protract its interest by relying on the defense of contributory negligence by stating that they both are aware of the food quality that is served in the restaurant and thus has voluntary agreed to consume the food and hence the defense of volenti non fit injuria is applicable.

4.2 Apply the law on vicarious liability

Issue
Can Fresh Foods can be held vicariously liable for the acts of its chef, George?

Law
The law of vicarious liability is only applicable in situation wherein the parties are in the relation of employer and employee and the employee is acting as per employment rules and undertake some act while carrying out employment and resulted in causing some kind of injury to a third party. Normally, when the employer is held liable for the actions of the employees which are carried out by him in the employment course, then, this shift of liability occurs as per the law of vicarious liability. (InBrief, 2016)

Application and conclusion
It is submitted that George is the Chef of Fresh foods. Thus, George is the employee of Fresh Foods. While carrying out his official duties George is preparing food with the help of expired food stuff. This food stuff has resulted in causing harm to Emma. Thus, it is because of the acts of George carried out within the course of employment that has resulted in loss to Emma (outsider). Thus, the law of vicarious liability is fully applicable.

However, it is important to submit that the Restaurant management has warned George several times not to conduct such practices. Thus, use of stale products is not authorized by fresh Foods. George is violating the instructions of the Restaurant and preparing the food despite express directions of the restaurant. Thus, it is submitted that the acts of George are not within the employment course.
So, Fresh Foods cannot be held vicariously liable for the actions of George as the same are outside the scope and direction of Fresh Foods.