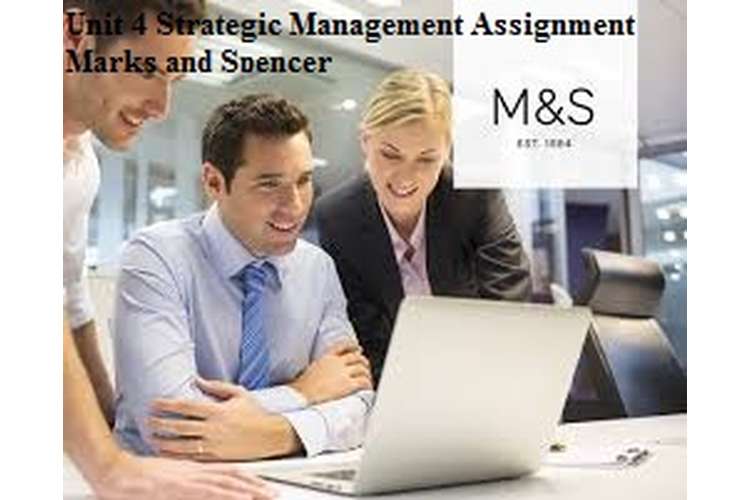 Unit 4 Strategic managemen marks and spencer is about the strategic analysis of Marks and Spencer in UK. The study of the company analysis is supported by identifying strength, weakness, opportunities and threats of the organisation by SWOT analysis. Further this report discusses about the business model that is porter’s 5 forces model applied by the company for the industry analysis. It examines the environmental factors that have their effects on the company strategies. The environmental analysis is explained by the PESTEL analysis method. This is the method that helps us to determine the political, economical, social, technological, environmental and legal factors that affects the  business strategy  of the company. (Duli, Gnjidi and Alfirevi, 2012)

This Unit 4 Strategic Management Assignment Marks and Spencer generates an idea about the business model applied by Marks and Spencer to face the competition in the external environment. At the end of the report, some of the recommendations have been given that supports the organisation to improve strategically and raise the business standards.

Porter’s five forces is the model that analyse the competition in a particular industry. It is a tool to strategic management that determines the position of an organisation in relation with other organisations in the same industry. The five forces that are involved in this model provide us with the information regarding the organisation’s present position and the strategies need to be applied to achieve a particular position in future. This model also helps in identifying the attractiveness of the industry. Attractiveness refers to the profitability of the industry. If the industry is profitable that does not mean that every company in that particular industry is in profits, it provides us with the idea of average profits an industry is earning.

This model helps the organisations to identify the effects of external environment but there are some drawbacks associated with it. This model of Porter does not consider the dynamic environment but is only applicable in the stable environment. It proves to be starting point for the further analysis but is not that much effective to make any strategic decisions. (Roy, 2009)

The founder of Marks and Spencer were Michael Marks and Thomas Spencer. It is one of the largest departmental store chains in UK. This organisation is into selling of products like; food, drinks, apparels, household items etc. They diversified their business by adding a new product line of financial products like credit cards and insurance. This organisation believes in the values to provide quality with affordability and good service. As they are into many businesses they have to deal with many competitors simultaneously. M&S is earning 90% of its revenues from UK market. The strategic position of the organisation can be explained by PESTEL analysis.

PESTEL analysis identifies the effect of external factors on the organisation:

Financial analysis of the organisation: 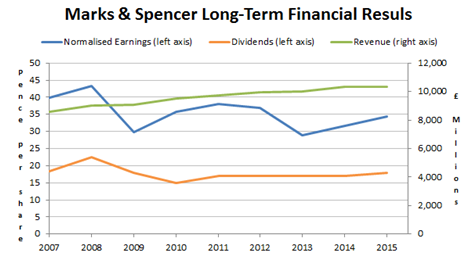 The above figure shows the flat results of M&S in recent years. It shows that the revenue is rising but the dividend and per share earnings are nowhere to be seen growing.

Over the last decade, M&S made an investment of about Pound 6bn into capital assets. This amount is more than what the organisation has earned. This suggests that it is a very capital intensive business that requires large capital for its survival and growth. 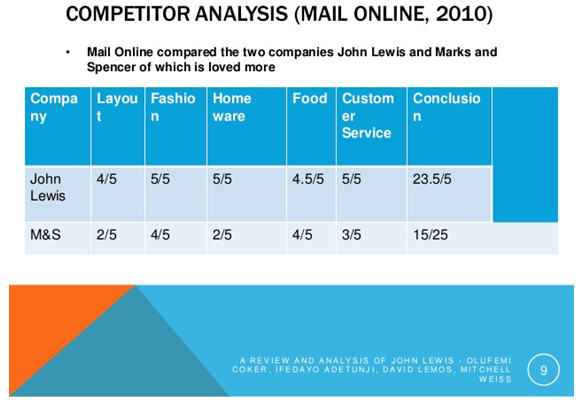 The above picture shows that John Lewis, the rival of M&S is found to be far ahead in terms of fashion, layout, home ware etc. The above data is extracted by conducting an online survey.

The study suggests that M&S has to take strategic decisions very carefully. It is lagging behind from its competitors as it does not possess any competitive advantage. M&S has to shift their strategy of being product oriented to consumer oriented. The overall study suggests that the company is not adopted the change management strategy. M&S is into so many businesses that results in higher competition by many organisations from different sector. It we take a look at the company analysis, it has been suggested that there are many external factors that affect the company’s policies. (David, 2005)

There are 3 types of analysis that helps in judging out the effects of these factors. First one is PESTEL analysis that provides us with the idea of political, economical, social, technological, environmental and logical factors that affects the organisation. Another one is SWOT analysis that helps in identifying the strength, weakness, opportunities and threat to the organisation. Last one is the porter’s five forces model that has been used by many organisations to determine the threat of competitors, substitutes and new entrant as well as to determine the supplier and buyer power in the industry. This analysis is done on the industry and not only on the organisation. The overall industry analysis of Marks and Spencer’s identifies that there are many competitors for M&S in the industry that have consumer focussed strategies unlike M&S. If we draw our attention towards the economic perspective, due to unstable economy M&S cut down its staff those results in lowering of  customer satisfaction . This is because the customer satisfaction is related to the resources available in the organisation.  (Corporate.marksandspencer.com, 2016)

It has been concluded that M&S need to be advanced in terms of technology as well as in terms of customer satisfaction, and then only this organisation can develop competencies over its competitors.

In order for Marks and Spencer’s to be competitive, it is necessary for the organisation to change the strategies. M&S has to develop the core competencies that help in fighting the global competition that the organisation is facing by its competitors. (Dul, Gnjidi? and Alfirevi?, 2012)

It is recommended for M&S to concentrate on the consumer’s choices rather than concentrating on being product oriented.