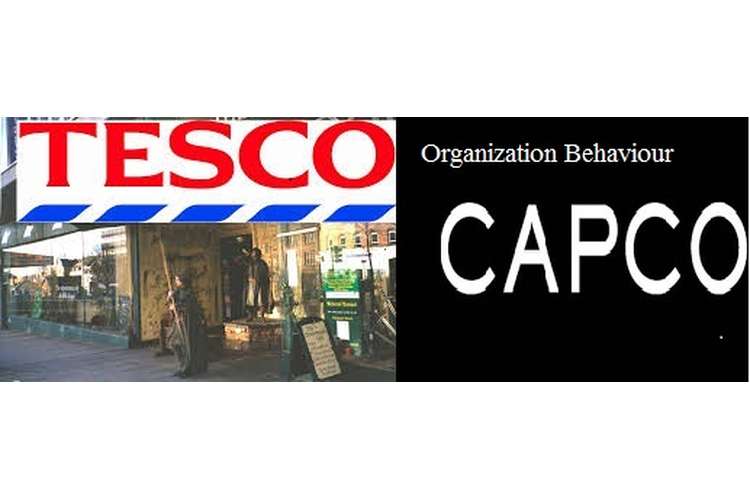 Organization behaviour is the study of interaction of employees within group. Individual’s behaviour is analysed to prospect the future of organization. Unit 3 organization behaviour assignment CAPCO & Tesco report will compare and contrast the difference and similarity of CAPCO and Tesco about their structure and culture as well discus the factors that influence the behaviour of staff members at work. In the next part report will compare the effectiveness of different leadership styles and motivational theories to manage the practices as well evaluate the different approaches to management that used by both the organizations. Moreover, report will compare the applications of different  motivational theories  and discuss the factors that promote the team work to achieve the goals and objectives of organization.

1.1 Compare and contrast CAPCO’s structure and culture with another organisation. Show the differences and similarities in these two organisations

There are many differences and similarity between organizational structure and culture of CAPCO and Tesco. Analysis determined that CAPCO and Tesco are similar in the organizational structure and workflow. Management of both the organization receive the commands from authorities and regulate them with the help of leaders. CAPCO and Tesco use the different kind of performance management tools to measure the individual’s contribution and effort in the outcome. However, tools are different in CAPCO in comparison of Tesco. Tesco considers the quality and effort of employees to rate them for their work whereas CPACO also includes employee’s behaviour, punctuality and dedication towards work. CAPCO’s performance management is based on the overall performance rather than influenced by critical behaviours as in Tesco (Alvesson, 2012). Alongside structural similarities, both the organization provides the good quality workplace and flexibility in work.

However, there are some differences in CAPCO and Tesco due to which they present their different positions in market. CAPCO makes the use of diversity and groups to accomplish the task. Groups in CAPCO are more flexible than Tesco to execute different type of task. Therefore, employees can be rearranged according to need of organization. Other side, Tesco presents the group structure specialised to work on specific task. CAPCO supports the transactional and democratic leadership style to make the decisions on employees with the help of employees. Tesco implements autocratic leadership style in most of part to ensure the quick and professional decision making. Culture of CAPCO is flexible enough to connect all the employees in a professional manner so that together they can achieve more productivity. Tesco’s culture is somehow different in term of communication and diversity among employees. CAPCO’s culture allows employees to contribute in work by their suggestions and idea (Zheng.et.al.2010). In comparison of Tesco, culture at CAPCO is more inclined at employees’ satisfaction rather than productivity. In this manner, CAPCO and Tesco are similar in functioning with some differences in their culture and structure.

1.2 How the relationship between CAPCO’s structure and culture can impact on the performance of its operations.

Culture and structure of CAPCO organization have a dependent relationship and reflects impact on operations carried out in organization. Management strategies toward the behaviour, attitude, disposition and ethical values of employees, determines the culture of organization. Structure at CAPCO management is smooth to engage with employees for the organizational as well as personal growth. Effectiveness in management structure reflects the more freedom and power at lower level. Proper alignment of organizational goal with the personal goal of employees helps CAPCO to create the motivated and positive workplace culture. CAPCO’ management works to enhance the capabilities of employees so that more productivity and quality in execution can be achieved (Lee and Yang, 2011). Hierarchical distribution of role, responsibilities and information in CAPCO organization helps to create the well-designed, behaved and empowered culture.

Organization also manages the diversity in organizational culture which is necessary to make the proper use of skills and experiences of employees. Management respects the social needs and listen from employees to make the structure more adaptable. Culture defined with flexible nature to work, engage with others and to express themselves is at core of structure to enhance the performance. CAPCO encourages employees to learn and grow with opportunities and supports them to enhance their capabilities. Culture at CAPCO is based on the four pillars- opportunity for fast personal growth, performance and rewards to recognise and praise contribution, work to use skills and talents and experience and learning to achieve unparallel knowledge enhancement (Kotter, 2008). These four pillars are considered as the important parameters in decision making process. 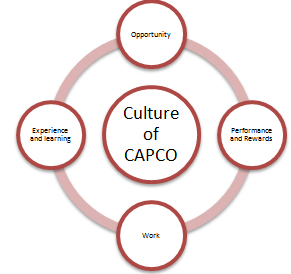 Mainly there are five factors that affect the behaviour of employees in employees in CAPCO organization. Employees’ behaviour may be driven by following factors: demographic factors, abilities and skills, perception, attitudes and personality. 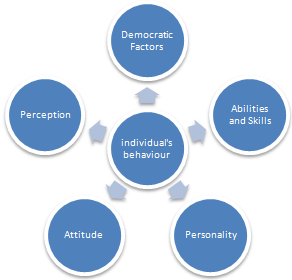 CAPCO adapts different leadership styles to drive the human resources towards the desired functionality defined by organization. Effective leadership helps to direct the employees towards the achievements and has courage to face the exception situations of business. CAPCO and Tesco possess similar structure to arrange human resources at workplace.

2.2 Organizational theories have had influence on the practice of management

2.3 Different approaches of management used by CAPCO and Tesco

Management of CAPCO and Tesco may implement different types of approaches to manage the resources. Some of approaches are discussed below:

3.1 Impact of different leadership styles may have on motivation within period of change 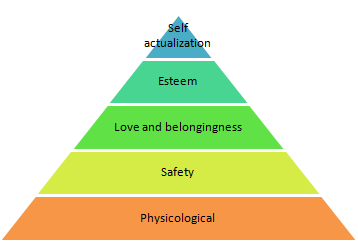 Therefore employees are applying their best efforts and being responsible regarding their duties. Apart from this, employees also start to work hard and ready to take challenges (Sachau, 2007). It has been clear that all these factors are most important to motivate employees at work place. Apart from this, challenging work and new opportunity also enhance skills of employees. This would be beneficial for future also. People love to learn something new at work place. Therefore, it is the best way to motivate them and use their capabilities in order to gain competitive advantages.

It is necessary to understand and apply motivation theories by managers at work place in order to enhance capabilities of employees and achieve goals of organisation in timely manner. It has been analysed that managers of CAPCO organisation are focused on motivational factors in order to enhance productive outcome. By considering Maslow’s theory managers should fulfil needs of employees and trying to achieve define factor (physiological, safety, esteem etc.) at work place. Every human being has its personnel physical needs and it is necessary to meet physical in order to function properly at work place. Managers should make better communication between leaders and team members (Augier and Teece, 2009). In is also necessary to include employees in  decision making  procedures. It would lead to improvement in love, affection and self respect of employees. Managers should give respect to employees also.

Managers should observe work environment in order to analyse proper safety measures at work place. They need to include proper training about how to use components and resources safely. Therefore, it would improve awareness between employees. CAPCO managers set Bench Mark for task. Employees have to attempt the bench mark by standard quality work. Mangers are awarding employees who make quality work. Therefore, this motivates employees to get reward and promotion. This motivate employee for hard work and being dedicate at work (Damanpour and Schneider, 2009). Now employees of CAPCO start to take each task seriously in order to attain bench mark quality.

Read About  Aspects of Contract Law Negligence in Business

4.1 Nature of groups and group behaviour

There are majorly two types of groups founded with organizations that have own characteristic and behaviour that helps to maintain the flow of operations according to organizational culture. According to analysis following groups has been founded within CAPCO:

4.2 Factors that promote and inhibit the effective team work in CAPCO

For an organization team work is essential that helps to meet the organizational objectives by improving the efficiency in work as well fuller utilization of available resources. In spite of that, there are many such factors that may cause hindrance in the development of the successful team. CAPCO is formed basically from diversity of its talented employees in the organisation. It is recognized that the people with different ability, attitudes, experience, culture and background bring fresh and innovative thoughts and perceptions.  To gain a complete advantage of diversity, a proper communication is required. Communication creates a bridge so that employees approach mutually to attain their common goals and objectives. Communication in CAPCO helps in making the correct and effective decisions so that an organisation can attain its desired goals efficiently. In building a good and effective team in CAPCO, motivation plays a vital role in it. Motivation energizes the employees to achieve their task with full dedication. The motivated people have a positive outlook and they also feel excited about their assigned task (Joo and Durri, 2015).

Therefore, the leaders of CAPCO are responsible for motivation of their employees to improve the qualities and capabilities of their employees for achieving the goals. For this purpose, proper training must be conducted which helps the leaders to enhance the skills of the employees. Technology also helps in making of an effective team. The various mechanisms and technology used must be appropriate in accordance with the capability of the employee so that they can make fuller utilisation of such technology. For developing the proper team in CAPCO, it is also required that the work allocated to them must be proper in such a manner that they can be more innovative to that and also helps in increasing the productivity too. Thus, it is observed that CAPCO is working to have better communication between the employees and the leaders are also trying best in enhancing the skills and abilities of the employees so that more innovation and production can be brought up and also to maintain the discipline and behaviour within the team.

4.3 The impact of technology on team functioning within CAPCO

It has been noticed that now the organisation has to deal with the dynamic markets. To stand in this dynamic market, organisations are now provided with the latest technology and tools. CAPCO is also using the latest technology in their day-to-day operations with the motive of increasing the profit. These technologies have become the core and essential part for an organisation. The introduction of latest technology in CAPCO not only brings the profit but also lead to improvement in capabilities of the workforce and reaching the job satisfaction. This also helps in better control and coordination in the teamwork (Miller and Rice, 2013). Use of technology also helps the management to have better communication and control over the various levels of CAPCO organisation. Various trainings are also held by the CAPCO so that the employees can handle these tools effectively. Appropriate use of technology also helps in diversifying the business of CAPCO. It helps in expanding the business in diverse geographical region.

CAPCO uses various technical tools such as E-mail, computers, mobile phones, etc. These tools let the employees to communicate easily without any barrier such as in respect to their location. They can communicate easily by sitting in any part of the world. Computers help the members of the team to perform the task much faster and accurately as compared to the task performed manually. The latest online technical tools helps in storing the information about the staff, accessing easily the information related to the customers, etc. Online tools also helps to be updated with the demands of the public and to have a sustain position in the market (Miner, 2015). The database system maintained in the CAPCO helps the team in having a proper functioning without any delay caused due to lack of any information. Thus, all these technologies laid a positive impact on the organisation and on the team functioning.