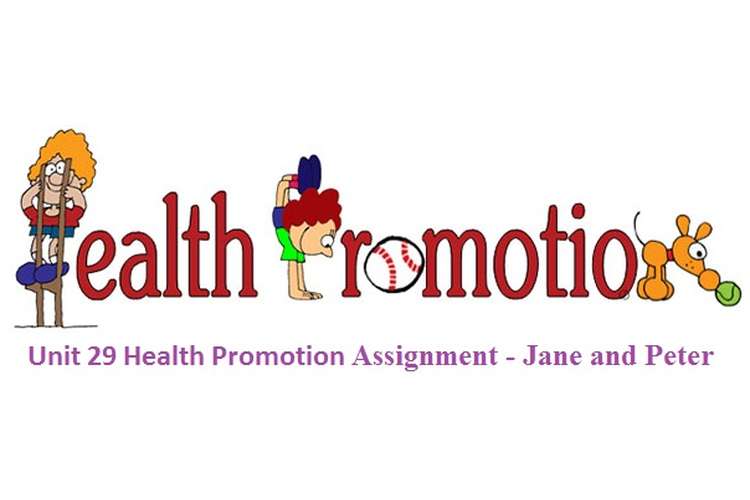 Health promotion is the process of enabling people to increase control over and to encourage improving their health. This kind of activity moves beyond a focus on individual behaviour towards a wide range of social and environmental intervention. The Unit 29 Health Promotion Assignment Jane and Peter will undertake the case of Jane and Peter and explain the effect of socio-economic influence on the unborn child of both and discuss the reason as well the possible barriers to Jane and Peter health care. In the next task report will analyze the link between government strategies and model of health promotion and explain the role of different professional in health and social care. Moreover, it will explain health belief related to theory of health behaviour and explain the importance of information considering the case scenario.

According to given scenario, of a 16-year-old girl named Jane and her 17-year-old partner name Peter. They are both smokers and drinkers. Recently they found out that Jane is three months pregnant. Jane and Peter both left school at age 15. They both live in council flats with their parents in Redbridge. Jane lives with her mother and Peter lives with both his parents who have a history of substance abuse. Jane currently works 16 hours a week in a  Business supermarket  and Peter is currently unemployed. In addition to this, socio-economic factors have significant impact on the life of Jane and Peter as well on the unborn child. Following are the key factors:

1.2 Relevance of government resources such as reports/research on inequalities in health

Health inequalities are been mainly defined as the differences in the health status among the different groups of population. It has been found that there are immense numbers of reasons of the inequalities in health. The inequalities in health could be generally experienced due to the racial group, geographical area, social class, gender, etc. In addition to this, in the present days poverty is been considered to be the major reason of the health inequalities. As per the given case, it has been seen that there are various governmental resources on health inequalities which helps in gaining the enhanced knowledge about the same. Some of the most common governmental resources are: The black report (1980), the health divide (1987), the Acheson report, Scotland health survey 2003, health and lifestyle survey, etc. These reports and researches plays a significant role as they provide with the adequate amount of information and data related to the inequalities in the health (Lewis, 2015).

The reports had identified the facts and figures about various incidents of inequalities in health and had also facilitated in gaining the enhanced knowledge out of it. It has been also found that these resources had facilitated in identifying the issues of the health inequalities in the country. It also helps in analyzing the lifestyles of the people and the health records regardless of any specific classes. For instance, The Black report had recognized that the health conditions in UK have been improvement but is not equal in all the social classes. Along with this, it has been found that these governmental resources helps in collecting the most relevant aspects related to inequalities in health and adopt the required measures to mitigate from the same.

By referring the given scenario, it is being considered that both Jane and Peter is drinker in the early age as well not having the earning to meet the needs to live a good life. According to analysis of case following reasons and possible barriers have been identified for accessing the health care:

2.1 Analysis of link between government strategy and model of health promotion

Health promotion is the process of enabling people to increase control over and improve their health according to proposed standard that helps them to maintain the effectiveness. Health promotion is sum of health education and healthy public policy that has been proposed by the government and national health care organizations. For increasing the awareness about the consequences of alcohol and early age pregnancy government of UK has started the campaign as well organizing the vaccination programmes. For example, National Institute for Clinical Excellence is developing the strategy to overcome the addiction of alcohol in young population like Jane and Peter which will help to promote the benefits of good health to avoid the critical health issues. In addition to this, the government of UK is following the health promotion models like Beattie’s to acknowledge that health promotion is embedded in wider social and cultural practices that a particular region follows (Thompson and Kumar, 2011). By using this model the government organizations are analyzing the current and past activities to promote the strategy like campaign, offering the services and personal counselling for creating the awareness.

According to evaluation of model and government approaches it is been carried out that health care professionals are working in a top down following the legislative actions and health persuasion techniques. For the given scenario, this kind of activities and techniques considering the Beattie model are effective as their aim is to protect individual and community. In addition to this for people like Jane and Peter the strategy that has been proposed by government along with model of Beattie will help to promote the health care awareness. In spite of that, personal counselling of Jane and Peter would be more effective and seek to empower to understand the value of health as well avoid the issues like high blood pressure during the pregnancy (Wakefield.et.al. 2010).  The government is using the three major systems of Beattie model for promoting the health that includes motivation, belief and normative for change and protect the health of individual. Hence, it is been considered that these kind of policy and strategy of government is helpful for people like Jane and Peter to gain the understanding of health care and avoid such things.

2.2 Role of different professionals in health and social care for health promotion

Daily routine of individual has significant impact on the healthy living and helps to deal with the stress and activities to meet the healthy living standard. For the individual in the current scenario, role of routine is critical as the level of stress and work pressure as well the life style is decreasing the standard of healthy living. For the given case, daily routines of Jan and Peter has the major impact on the current poor health situation of both as the use of alcohol and sexual activities in the early age would lead to depression and other health issues which may have the lifelong impact (Frieden, 2010). According to healthy routine aspects like good habit, behaviour and approach of individual to perform the daily tasks which are beneficial for health. A standard routine for healthy living involve the elements like early wakeup, breakfast, positive behaviour, low stress, sound sleep and control over the emotions which affect the health.

According to case Jane and Peter are not following any specific routine that that helps to maintain the healthy living and process to meet the young age health standard as both of them are addicted to smoking and drinking as well having the sexual relation at the age of 16 and 17. This kind of routine is not good for healthy living and could have long term impact of body of Jane as she is 3 month pregnant. In addition to this, shortage of disposable income and the lifestyle of both is very complicated as at this young age Jane and Peter are involve in high level of drinking and smoking which is not good for the health (Mhurchu.et.al. 2010). This kind of life style will be due to lack of education and lack of monitoring of parents. Hence, it is been considered that daily routine of individual has direct impact on the healthy living.

The health belief of individual has the significant influence of culture and religious practices that promoted by parents, teacher and friends. In addition to this for promotion of health the past experience also considered as key elements. According to health behavioural theory the health belief model of understanding human behaviour consider the following factors that need to communicate to Jane and Peter: 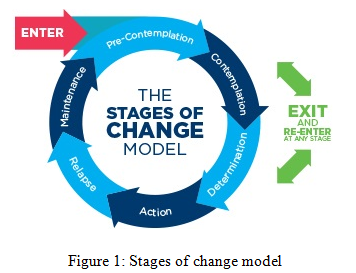 In order to maintain the health behaviour, it is been proposed to Jan and Peter to consider the following stages for controlling and managing the behaviour:

3.2 Possible effect of potential conflicts with the local industry

For the promotion of health, there are various conflict issues that have significant impact on the process of achieving the outcome. For example, ban over the sale of alcohol under the age of 18 is creating the situation of conflicts with the local alcohol industry. In addition to this, changes in the lifestyle and behaviour of young generation has significant impact on the health promotion activities which is leading to worst health conditions of young people like Jane and Peter. For an individual or community, impact of social environment has significant contribution in accessing the health care services and knowledge about the activities that could hamper the current state of health using the alcohol as well the early age sexual activities (Thompson and Kumar, 2011). Hence, it is being considered that the social environment in which Jane and Peter are living could be major barrier in accessing the health care service as well having the negative impact on the local industry.

According to current socio-economic environment, it is very important for young generation to have the knowledge about the consequences of using alcohol and early age sexual activities. By considering the case of Jane and Peter it is been recommended to health care organization and education centres to offering the all significant information about the health promotional activities which influence the understanding of young people. For example, the health care  personal and professional  needs to provide personal counselling to both Jane and Peter about the impact and long terms consequences of drinking alcohol (Frieden, 2010). This kind of approach and activity of health care professionals will help to overcome the use of alcohol at early age and will support to promote the health benefits. For instance, The Black report had recognized that the health conditions in UK have been improvement but is not equal in all the social classes. Along with this, it has been found that these governmental resources helps in collecting the most relevant aspects related to inequalities in health and adopt the required measures to mitigate from the same.

From the above Unit 29 Health Promotion Assignment Jane and Peter, it can be considered that health promotion is much needed activity according to current health awareness of young people. The changes in the lifestyle, vast differences in economic standard and curiosity about the sexual activity are affecting the health standard. Report has explained the effects of socio-economic influence and provided the reasons of not accessing the health care services. Moreover, it has analyzed the link between government strategy and Beattie model to promote the health and discussed about the role of routines with respect to Jane and Peter. At the end, report has explained with examples the importance of providing information about the health promotion.

Unit 29 Health Promotion Assignment Jane and Peter will undertake effect of socio-economic influence on the unborn child of both and discuss the reason as well the possible barriers to Jane and Peter health care, We are posting units solutions so scholars can explore the our  Assignment Help in UK  and get review the quality of our work.