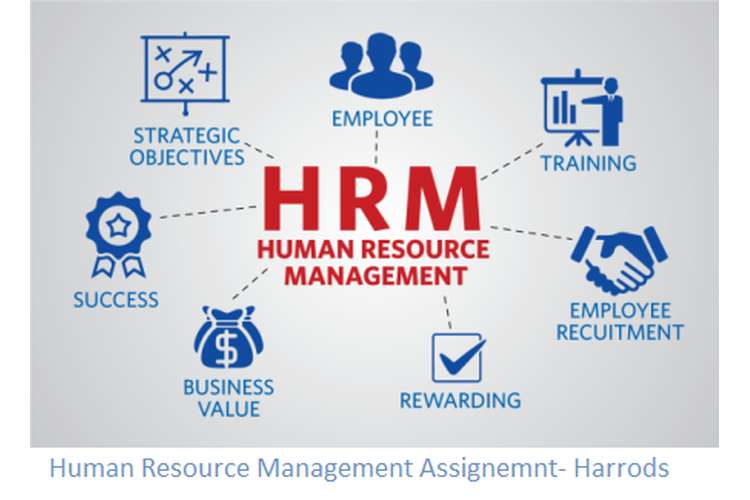 Human resource development  are the studies and practices which make an individual develop a specific skill set which makes him competent enough to survive and serve a job in an organization, it is a vast field of study which has various applications, Training and development is just a part of it.

In the following assignment the following are discussed in brief to give the holistic purview of the Human resource management in the organization, difference between the personnel management and human resource management, various methods to evaluate the job, reward system which is efficient enough to keep the employees motivated, the kind of system followed in Harrods, various government guideline and regulation and their compliance by the organization.

These all will be discussed in order to give the understanding and the holistic view to explain and understand the learning objectives defined below in context of Harrods a retail chain in UK.

Back in 1892 when general electric was founded by Edison, the basic role of the managers working in the personnel department was managing the documents, paying compensation, looking to  leaves and solving the disputes among the employees it is only after the world wars when the company started to expand its footprint in the international market that it adopted and evolved to the more strategic role of A human resource manager whose role was to do basic functions of the personnel manager and to look after the succession planning, handling the relationships with managers and to reduce turnover within the organizations.

These are some major differences between the two are as follows-

HRM is more of a strategic function in the organization typically concerned with the manpower planning, future planning along with the basic functions of personnel management.

As the role of HR is widening with the time the responsibilities assigned the planning horizon is bigger than ever, Harrods being a company established long ago needs to develop according to the evolution and it has done so since all the work cannot be done by a single person and hence need to divide the task among the groups becomes more important. (Wilton, 2016)

1.2 Assess the function of the human resource management in contributing to organizational purposes?

The functions of human resource management in the organization are-

It is the job and duty of the HR manager to see that the best and the latest practices are given to the employees and practiced in the organization so as to keep the competitive advantages in place to cope up with the rising competition.

Example, recruitment and selection saves time, training and development keeps them competitive, and various administrative tasks of HR keeps a smooth flow of working but doing them differently increases the expense of such activates hence Harrods has the centralized system which integrates the activities for all the stores to reduce the cost and improving profits. (Bingham, 2016).

1.3 Evaluate the role and responsibilities of line managers in human resource management?

The following discussed below are some of the basic responsibilities of the managers in the Human resource department.

At Harrods the line manager id responsible to keep track of the activities and performance of the subordinate coordinate with them to keep them satisfied and solve their problems which motivates them and then paying them accordingly with respect to their performance. (Grumen, & Sacks, 2011)

1.4 Analyze the impact of the legal and regulatory framework on human resource management?

In order to avoid any legal complications the HR department at Harrods complies with all the laws of the land and has the full fledged compliance department to look after all the proceeding as per the law defined in the country. (Lepak, David, Bondarouk, Tanya, Meijerink, Jeroen, 2016)

The various objectives for the human resource planning are:

There are various stages involved in the human resource planning

The HRP differs from company to company for example Harrods screens the candidates based on their CVs they are then sent on the sample job in one of the stores for the period of two days to assess how they perform in the real environment the and after that on the basis of the feedback which is taken from the manager, an employee who is the best among all and suits the organization is selected.

Mc Donald’s on the other hand depends on the one to one interviews with the store manager and the technical knowledge in the worker the best suited is appointed in this case. (Karunaratre, 2016)

2.3 Compare the current recruitment and selection process in the organization with another organization you recommending?

In the current organization the organization calls up the candidates who have applied and takes a telephonic interview with the manager the candidates who are selected are proceeded to the next round which is the HR interview round where in face to face interview takes place the one who clears that are then assessed on the basis of the psychometric tests and the technical tests which is actually the very opposite process followed by the other organizations.

As practiced in Harrods

Harrods posts its job openings through various websites, web portals and career boards in stores, also media such as TV’s, FM radio, newspapers and journals the various modes enables the candidates to know about the available jobs and then apply for them at the same time. The resumes then received are shortlisted according to the requirements and then called in to give the sample of their work by working in the store for two days their work Is then evaluated by the store manager and submitted to the hr. manager who then picks up the right candidate and calls them for the face to face interviews the best on suited for the job is then selected and appointed. This method is best suited for the organization because of the kind of work the organization is into. (Desseler, 2011)

2.4 Evaluate how effective is the organization recruitment and selection techniques with another organization you recommending?

The postings are advertised through various methods where the required human resources are available. The resumes or the invitees are then screened the candidates are sent to the stores to perform the job for two days where the supervisors assign them the duties and looks for the quality of the performance if I suits the organization the manager gives the report to the manager who then calls them for the interview and selects the best suited candidate for the job in the organization. (Qadir, 2016)

3.1 Assess the link between motivational theory and reward at Virgin Media or your chosen organization. Your answer must show if you think there is a link, what connects the two?

Efficient reward system is the best. The paramount aim of the Human Resource department at Harrods is to pay the employees and keep them satisfied through any means possible be it monetary or non-monetary in order to keep them motivated and productive enough at the jobs the employee base at Harrods is efficient and loyal to organization because of the simple fact that they are satisfied by the remuneration they are paid for the jobs they do and targets they achieve. Any company is only successful if their employees are satisfied and successful this can be done by achieving the work life balance by offering them flexi timing and additional benefits. Staff survey is performed to know the satisfaction level of the human resource so that necessary measures can be taken to improve upon it. Some of the key steps taken by Harrods include,

3.2 Evaluate the process of job evaluation and other factors determining pay at Virgin Media or your chosen organization?

Harrods group profile is most widely recognized and used in over 7000 companies to find the effective method to evaluate the job and find the right match in a workplace, there are three factors which are given prime importance when evaluating the job,

The following are the three factors which are considered as of paramount importance when evaluating the jobs in the organization, knowledge required to perform the jobs, responsibilities assigned to the individuals and creative and analytical thinking required solving the complex problems as a part of the job.

There are many more factors which are considered when determining the pay,

There are many more factors which effect but above discussed points are some important ones. (Dickmann, Brewster, & Sparrow, 2016)

3.3 Assess the effectiveness of reward systems in virgin media or your chosen organization?

Harrods in all the cases defined above has a very efficient and well planned reward system to reward the employees for the hard work they put in and is suitable for all the kind of employees with different motivational drives. (Meyer, & Frank, 2012)

3.4 Examine the methods organizations use to monitor employee performance?

The employees at Harrods are rewarded as per the goals achieved by them which are set in the beginning of the time frame the goals can be over achieved, under achieved, or just matched  these are the factors which Harrods has identified to measure the performance,

All these factors are important and suitable in the context of job evaluation at Harrods all of these may not apply in every case depending upon the situation and time the suitable method is used. (Biggain, & Allen, & Albert, 2016)

4.1 Identify the reasons for termination of Faisal’s employment contract with The Chicken Master and generally explain other reasons for cessation of employment.

Faisal used to remain unavailable at the work of time, being late at the office hours, going early, not helping to resolve the problem of the customers and disinterest in work are some of the reasons due to which the contract between the chicken Master and Faisal came to an end. (Marler, & Parry, 2016)

4.2 Describe the employment exit procedures used by The Chicken Master and another organization of your choice.

Exit procedures may outline as the modes through which an employee exits from and by his own wish or is forced to quit.

Chicken master mostly used all of the methods except for dissolution through either organisation terminated the contract or workers left it by their own wish. (Kira, 2016)

4.3 Consider the impact of the legal and regulatory framework on employment cessation arrangements with an organization such as The Chicken Master if Faisal’s claim was proven to be true.

Regulatory and legal framework helps the employer and the employee when they face some critical situation and which could only be solved through such contract. An organisation should always be bonded by a contract with the employer which fixes the responsibility of both towards each other.

If Faisal proves his claim, resulting could be-

The impact of such false allegations by the chicken master could be very dangerous for the brand image of the company as well as it will somehow affects the sales and profits of the company as it breached the trust of all the faithful customers. Even the market price of the shares may fall down which will affect the positioning of the company in the securities market and will give rise to a huge loss to the company. (Kira, 2016)

Human resource management means handling of the employees and workers of an organisation. It is a very wide topic which includes the personnel management, the roles and responsibilities of employees, their rights and duties and the code of conduct which has to be followed for successful completion of work.Human resource management is a continuous, never ending activity which has to be carried all the time so that proper and timely completion of work takes place. It also includes motivating, building trust, increasing loyalty towards the organisation so that no lack from any side may arise from the employee’s part. In this assignment we gave emphasis on proper development training of the employees, their motivation, their satisfaction as well as providing them with the benefits. This assignment also helped us in knowing various laws applicable to the organisation and various remedies which are available to both employer and employee to use in case of any difficulty.