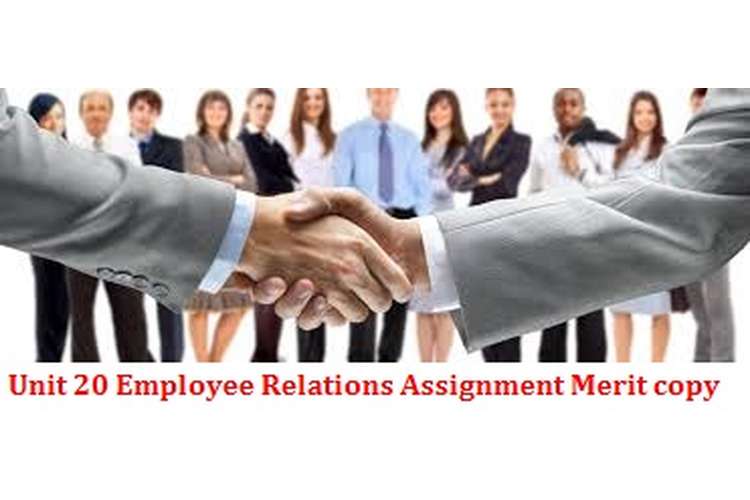 This Employee Relations Assignment is developed to have the information about the relationship between the employees in business.

1.1 Unitary and pluralistic frames of reference explaining the implications of each of the perspectives for the appropriate means through which conflict is to be resolved.

These perspectives are based on the assumption that there exists a unity of interest among the members of the organization. This means that the employees and staff working in an organization have common interests which inspire them for work. Due to this reason, the chances of existence of conflicts among them do not arise. This frame of reference assists in resolving the conflicts among the employees by incorporating these common interests of members of organization as a solution for the cause and problems of such conflicts. The conflicts under his frame of reference which may arise out of individual interests against organisational gaols result in mistakes and errors in the work performed ineffective communication among members, division of members into two sides etc. which consequently leads to the influence on the environment and culture of workplace. Such conflicts can be resolved through proper and effective communication (Townsend. Et al, 2015).

These perspectives are based on the assumption that the interests of different members of the organization differ from each other. Even after having the common employment interests the interests of workers and managers are divergent. This divergence of interests creates chances of conflicts arising among the members since interests of both groups’ managers and workers direct their efforts towards the achievement of organisational goals. The main reasons for conflicts under this frame of reference is the difference in level of remuneration and disputes arising out of rights and authorities possessed by them with regards to application of terms of employment agreement. These conflicts result in disputes of rights and interest, collective bargaining, bargaining. These conflicts can be resolved by adopting effective procedures for resolving disputes, negotiations, etc. since the cause of disputes relate to dissatisfaction due to difference in level of remuneration and employee rights.

Employee relations refer to as the concept incorporating the system, rules and procedures addressing the aspects to be included under the human resource management process for prevention and resolving of employee disputes. The changes in the trade unionism relate to the evolution of the concept of employee relations from the convergence of industrial relations. The traditional industrial relations concept related to the formation of institution for job regulation for determination of employment rules which focused on collective bargaining. This extended to the development of system with procedures and rules for reward to employees for their efforts, protecting interest of employees and regulating the manner in which employers treat their employees (Nickson, 2015).  Individual grievances disciplinary policies, labour legislation, industrial relations training and state and government intervention are some of the concepts evolved. These changes over the time resulted in employee relations development which more comprehensive concept iscovering various aspects of HRM which focus on dealing with the employees collectively under Human resource management process. The effect of changes has resulted in more focus of organizations on employee welfare, participative management, employee personal and professional development, employee safety and employee remuneration rules and policies. Consequently the managers in the resent business environment adopt the procedures that relate to involvement, engagement, participation and partnership rather than using collective bargaining and negotiations as tools of conflict resolution and management. This assisted in focusing on individual relationship of workers with management and eradicating the root causes of the conflicts so that they may not result in loss for the organization (Long, 20160.

2.1 Explain the procedures an organisation (NHS employer) should follow when dealing with different conflict situations (such as with a single employee, between employees, with a group of employees).

2.2 Explain the key features of employee relations (ideological framework, conflict and cooperation, consultation, negotiation etc.) with reference to the above conflict situation.

Both the parties in the conflict situation were negotiating in the best interest throughout the process of conflict between them. The procedures followed by the BMA Association members and the new junior doctors were limited only to the strikes which were conducted by them repeatedly. On the other hand the procedures followed by the government were related to the collective bargaining for resolving the conflict. However after the new contract in May 2016, the government forcefully announced for the implementation of the plan. The agreement was rejected by majority of the doctors where 42% voted to accept the contract and 2% voted to reject it. This procedure of government cannot be considered to be effective since this is unfair imposition of employee rights against the new junior doctors. On the other hand the junior doctors again planned to conduct the strikes to protest against the injustice. The procedures followed by the junior doctors are limited and not extended to some other actions. After this the junior doctors association reconsidered the plan and postponed the strikes for the welfare of patients as the general citizens of the society and community. Considering the consequences of the strikes faced by the patients in the form of ill health, the association postponed the strikes which were an effective procedure with regards to ethical policy but in context of employee relation, this resulted in the end of negotiations and sacrifice of rights of employees to get the protection against the injustice (Ntalianis, 2015).

Negotiation refers to as the conservation between two or more people which takes the form of discussion where the two parties present arguments in favour of their interests where the discussion is being conducted between the parties for the purpose of arriving at a mutual consent or agreement for a specific situation or conflict.

3.2 Assess the impact of the negotiation strategies adopted by both parties in the above conflict situation and comment on other negotiating strategies and the potential impact it could have.

The other negotiation strategies and the potential impact of these strategies in the given conflict situation if such strategies were adopted are as follows: 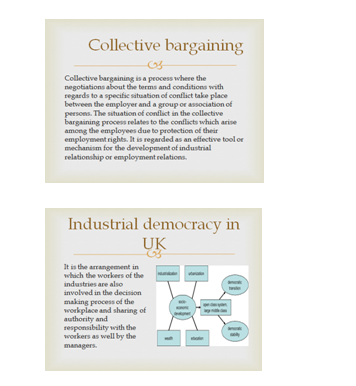 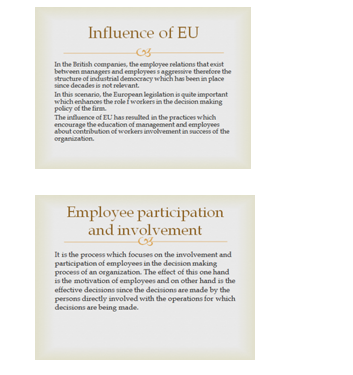 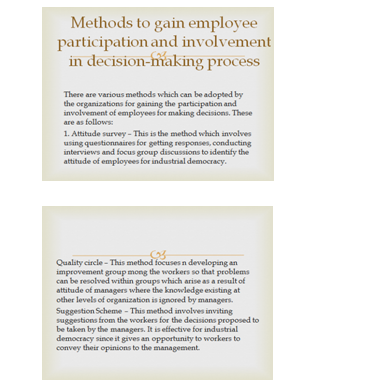 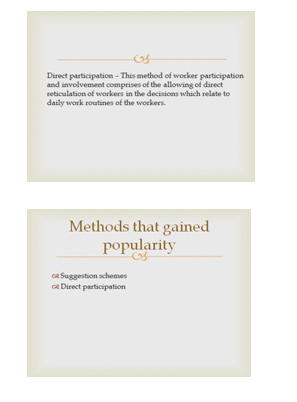 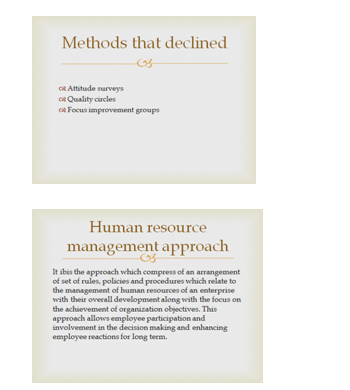 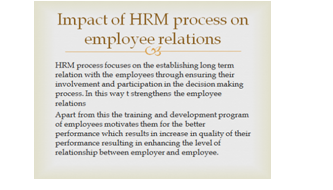 This presentation includes the description about the collective bargaining process in details and the influence of EU on these processes and industrial democracy policy. This is the important elements of the employee relations process and includes negotiations. The implementation of industrial democracy policy in the companies of UK has been explained. The diagram represents the structuring of companies and the method in which the companies are placed with the influence of industrial democracy policy. The influence of European Union on the policy of industrial democracy in the companies in UK has been described. The influence resulting in the evolution of employee relations and development of concepts that relate to employee relations are included. The meaning and description of employee participation and involvement in the employment relations policies and the manner in which such participation takes place along with the impact it creates are included. The methods which can be effectively used for obtaining the long term participation and involvement of employees have been described. The methods are explained in detail.The various methods include attitude survey, quality circle, suggestion schemes and direct participation. The making and process of these methods have been explained in detail. The description of how these methods can be effectively used in employee relations has been described. These are the methods which have gained the popularity in the companies of UK for the involvement and participation of employees in decision making process.These are the methods which have declined in terms of popularity for being effective in obtaining the involvement and anticipation of employees for decision making relevant to the organization and employee functions.The meaning and description of approach which is used for the management of human resources of an organization is included. This includes discussion and detailed description of the processes used under the HRM approach to affect the employee relations is included.