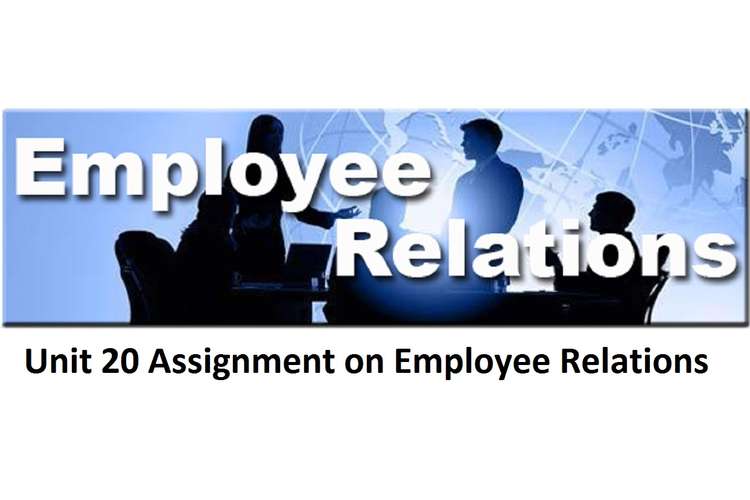 An important role is played by the workers in the industry for producing the goods and other services. Labors and workers are an important aspect of any production process. Generally the labour is engaged by the management of the company directly. In certain cases the labor demands a fair share in the goods that has been produced and the management may not agree to their demands which may lead to a situation that the labors had to strike and the complete production process of the company gets stopped (Gennard, 2009). Thus in order to keep the wheels of industry moving, it is important to take proper steps to quell the dispute among the management and the workers. In certain instances the government also has to step in to resolve the dispute between the management of the company and the labour by implementing some legislation and doing some negotiations with all the stakeholders involved in the process.

In this assignment the concept of employee relations will be analyzed through the different perspectives and history of the formation and the development of the labour unions and how came into being will be explained.

1.1      Unitary and pluralistic frames of reference explaining the implications of each of the perspectives for the appropriate means through which conflict is to be resolved

1.2      Assess how changes in trade unionism have affected employee relations.

1.3      Explain the role of the key players in employee relations.

The employee relation is generally related to the interactions that take place between the parties that are associated with the employment relationship. Generally in employee relations there are three parties; employers, employees and the party which acts on their behalf like the trade unions and the employer associations. In some cases the third party role is also played by the state agencies and the EU institutions.

Role of Managers in the Employee relations:

The healthy employee relationship is extremely necessary for the workers to perform at their best in the organization. In order to allow the organization to work properly it is important there is friendly relationship between the employees and their no back talks among the employees which can spoil the relationship among the employees. The team leaders and managers play a very crucial role at this juncture so that healthy employee relation can be promoted. The supervisor also assigns the work such that it is challenging and interesting for the workers. In order to determine the interest of the individual workers, during the development of the KRAs of the individual workers they are invited for providing their suggestions on what are their interest and what motivates them. If the workers decide which kind of work they will perform they will not be able to blame the management of the company. Also it is the work of the managers to encourage the workers to take up the challenging tasks. The main job of the team leader is that he has to be the role model for the other workers and it is his responsibility to treat every other worker without any kind of partiality. The team leader should appreciate the workers if they had done exceptionally well and in case they have done any mistake then they should be guided properly. Also the mangers of the company should not be pricy and he should be available for the workers at any point of time. This will help to create confusion in the minds of the workers at any point of time. Also it is the role of the managers to ensure that the important communication take place in the open forums and all the people get the same perspective about the issue. In case of the employee relations, it is important that the managers ensure that there is transparency in the communication process (Jiang, 2012). Also the mangers have to encourage healthy competition in the organization. Also the mangers have to ensure that there is cordial relation among the workers and they sit together during lunch.

The mail role of the trade unions is that they look after and protect the interest of the workers. The main role of the trade union is in the collective bargaining with the higher management of the organization. Through the labour unions it is possible that the workers get equal rights. Like in United States of America the labour Unions have successfully closed the sweat shops and were successful in abolishing the child labor.  Welfare of the employee is another area where labour unions play an important role. The labour unions have workers successfully in improving the working conditions of the employees (Kim, 2007). Unions have also played role in providing social security to the employees and also work continuously to improve the working standards. The labor unions are also instrumental in checking the unfair labor practices in the organization. They prevent discrimination and victimization of the workers. Also unions play a very crucial role in the formulation of the legislations. The unions generally push for legislations in those areas which concerns the labors and the workplace. Also unions play a role in the monitoring and enforcement of the labor laws.

Role of the state in employee relations:

The state generally intervenes in the employee relation so as to achieve a social or an economic goal.  The government has to ensure that there is high level of employment in the country. There is stability in the prices and the also surplus balance of payment can be maintained. The government also has to ensure that the exchange rates are protected.

2.1 Explain the procedures an organisation (NHS employer) should follow when dealing with different conflict situations (such as with a single employee, between employees, with a group of employees).

2.2  Explain the key features of employee relations (ideological framework, conflict and cooperation, consultation, negotiation etc) with reference to the above conflict situation.

With respect to given case study of conflict the first thing that has been done is that the management of the company has to acknowledge that the problem exists in the very first case. Also the NRS employers have to ensure that the employees are able to express their feeling openly and freely. The NRS employers has to first define the problem properly and have to comprehend what negative will this conflict have on the work.  They have to understand the underlying need related to the conflict situation which will help to reach to a situation which is beneficial for the all the stakeholders in the conflict. This will also enable the NRS employers to understand the needs for the resolution of the conflict.  It is important that the common areas of agreement are reached and all the parties agree with the procedures that have to be followed for the resolution of the conflict. Also the parties can develop the solution by generating different alternatives and while formulating the final solution it is important that the NRS employers get a real agreement from everyone. Also who will follow up to monitor the actions will be decided.  The parties have to decide in advance the process that will be followed in case the conflict is not resolved (Men, 2011). All the parties can also seek for mediation so that the issues can be resolved as fast as possible. But for this process all the parties associated with the conflict has to agree to have mediator.

There are various procedures that has been followed by both the parties in the given conflict situations. These procedures are illustrated as follows:

Responding to the conflict:It was important that after acknowledging that the conflict is there the managers have to respond in such a manner that it is possible to get a solution.

Understanding the issue:The managers have to first listen to the other’s perspectives and try to understand the root cause of the issue. It will be important the statement which put blame on others are avoided and find out the specific actions which have been referred.  It is important that the managers try to find out the hidden agenda which will help to resolve the conflict earlier.

Working out a solution:After the problem has been understood, the managers has to build such an environment that all the parties in the conflict can work together to reach out a solution.

The collective bargaining is ways which are followed so that the conflict can be resolved as early as possible. In this process negations play a very huge role as it helps to determine the conditions of work and the different terms of engagement. Without proper negotiation the managers will impose their conditions without taking into account the view of the employees.  The industrial dispute act no. 56 of 1999 also facilitates collective bargaining. In case of collective bargaining the negotiation is used for different purposes. The negotiation process comprise of collection of the data and the analysis of the same data (Waal, 2012). In the next step the issues are identified and the planning is made. Then the preparation for meeting is done and accordingly the presentations are made by the employees.  Through the help of the negotiation a common ground is identified with the NRS employers and they also decide upon the concessions. Lastly in the basis of the negotiations that has been made the final offer is prepared. The negotiation process is concluded once all the parties associated with conflict are satisfied.

3.2      Assess the impact of the negotiation strategies adopted by both parties in the above conflict situation and comment on other negotiating strategies and the potential impact it could have.

As there is a conflict between the BMA and the NRS employers, negotiation between the parties is an important way to quell the conflict.  Before the bargaining process the junior doctors have to first set the objectives and asses these objectives whether they are in line with the industrial policy.  The union has to make a detailed analysis of the latest trends followed in the contract.  The negotiation strategies that have been adopted by both the parties are that the parties are not able to come to a common page to resolve the conflict. There is some confusion regarding the objectives in the BMA as it has not been able to provide a comprehensive plan that can be followed for to get the demands met (Men, 2011). The NRS employers and the government on the other had are adamant to pass the resolutions for the new contract with considering the apprehensions of the junior doctors. The government is try to force its way but it is also not able to pass the resolution due to the protest by the BMA. This negotiation process will have a bad impact on the health sector and the health services and all the hospitals will work below their capacity as the doctors will be either on strike or they will not be willing to do their job.  Further strikes in hospital will completely cripple the emergency services in the hospitals.