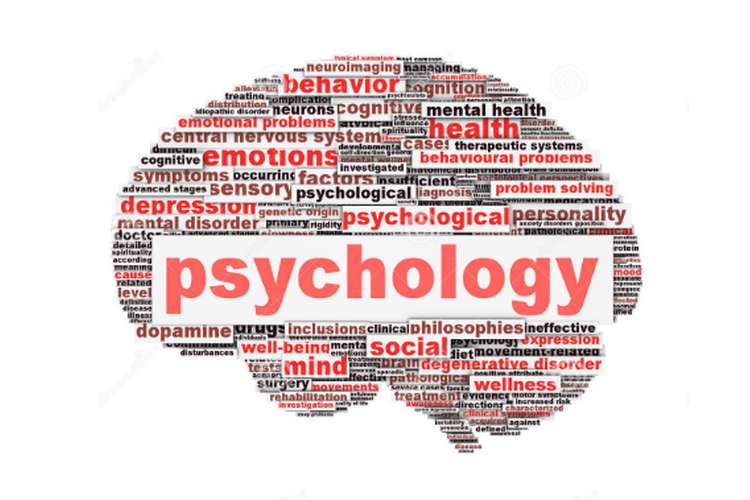 This Unit 15 Psychology for Health and Social Care Assignment makes a comparison of various theories of life span development along with throwing light on the relation of various psychological theories with specific stages of human development. It also explains the social and biological factors that have an impact on human behaviour and the significance of social roles in the context of health and social care. 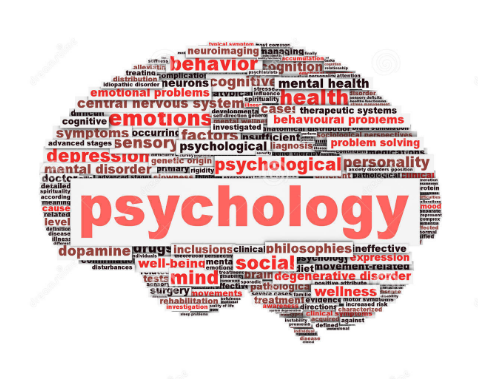 This report gives a comparison of various theories of development of an individual in life and how psychological theories have a relation to the stages of human resources development.

Explanation of how psychological theories and concepts are related to the specific life stages.

Over the past many years, various psychologists have given theories for the quantification of the stages of development of human being.  Following are some prominent theories.

Psychosocial Development Psychology by Erik Erikson: Erikson says that our changing manners in relation to social environment and society, takes place in eight stages.  The first stage is "trust versus mistrust" and takes place from birth to 1 year of age. On the basis of the requirements of the child being met by the society, he develops trust and mistrust. These requirements are food, comfort, sleep, affection etc.  The second stage is "autonomy versus shame" and doubt that takes place between 1 and 3years. At this stage the children learn to be independent, depending upon the liberties given to them to explore their world. If over-restrictions are exerted upon them, their creativity is stifled and their behaviour tends to be self-doubting and shameful. Next stage is ‘initiative versus guilt, that takes place between the ages of 3 and 6.Here the children try to explore more of their business environment by initiating experiences. At this stage the child is inquisitive and if parents do not pay heed to his questions, and then he develops a feeling of guilt for being nuisance. 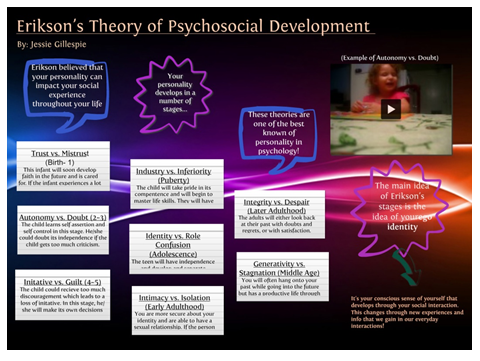 Fourth stage is ‘competence vs. Inferiority’, that occurs between 7 to 12 years. Here the per group of the child becomes significant and tries to demonstrate. Success leads to virtue of competence and failure to inferiority. Fifth stage is ‘identity versus role confusion’ taking place from 13 to 18 years of age. Children give significance to relationships, family, career and make efforts to befit in the society.

At this stage the adolescent re-examines his identity and tries to relate himself/herself with someone of his/ her liking. If he/ she fail to establish identity in the society then it results into role confusion. Sixth stage is ‘young adulthood’ ranging from the age of 19 to 40, where the individual explores relationships in terms of commitments for long term. If the individual is successful here, he develops a sense of security and intimacy and unsuccessful events lead to isolation.

Next stage is ‘generativity versus stagnation, taking place at the ages between 41 and 65. At this stage an individual settles in relationships and career and is involved in being productive in life and community. Failure to do so makes the life stagnant and the success leads to a sense of care. The last stage is ‘Ego integrity versus despair that takes above the age of 65. The productivity of an individual is slowed down and he contemplates his accomplishments. If he finds himself leading a successful life, he develops integrity and if not then he develops despair.

Piaget suggested that an individual passes from one stage to another on the appropriate stimulation for change. Without this stimulation, an individual cannot achieve full potential. Piaget suggests that a stage of ‘sensorimotor’ occurs in an individual’s life from birth to 2 years. At this stage, children develop motor skills and have little ability for symbolic representations.

Next stage occurs from ages 2 to 7, called ‘preoperational’. Here the children try to make use of language and conceive their surroundings but cannot conceive things that are not around. Next stage is ‘concrete operational’ ranging from 7 to 12 years of age. Here, the children start developing clear thinking but are bound with concrete world and are unable to conceive substantially abstract thinking.  Last stage is ‘formal operational stage ranging from 12 years of age to adulthood. At this stage, individuals develop the logical and systematic thinking ability and conceive abstract thoughts. 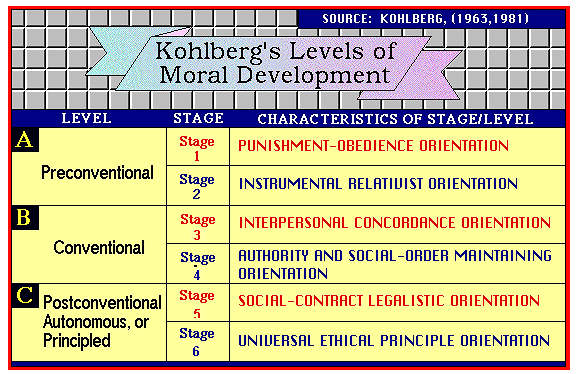 Kohlberg’s stages are in terms of ways in which children develop moral reasoning ability at various stages of life span. The first stage is ‘pre-conventional’ where children formulate morals on the basis of being affected themselves. For instance, if they are not punished by doing something then it is referred as ‘right’. Next stage is ‘conventional’ in which the bases of moral decisions are the conventions prevailing in society. Something is said to be right if the society approves it. All individuals do not go beyond this stage but those who do, reach ‘post-conventional’ stage where the base of moral decisions is personal thinking and beliefs. (JRank, n.d) 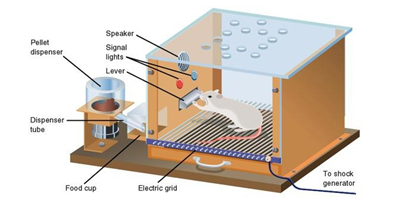 The life of an individual at infant stage does not possess basic repertoires of behaviour. These repertoires are adopted via complex learning situations and the individual gains the ability to respond to various situations in life. (McLeod, 2007)

Theory of Humanism: This perspective studies the human as a whole. Human behaviour should not only be looked from the eyes of the observer but also through his own eyes. 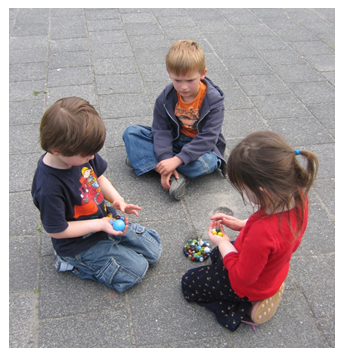 It involves the following stages.

Conclusion: This report is an attempt to explain various theories of psychology affecting various stages of human development.

A human being is a social animal and his social and biological behaviour gives him and image in the society and he becomes what he is. Based on the ancestral behavioural factors, the biology of a human responds to stimuli and the social factors dictates the alterations and restrictions in which the human being carries out the biological responses.

Self-Preservation: As the human being is a social creature he always struggles to attain a happy mind and living. Self-preservation includes the liveliness in life either physically or psychologically. For this he always tries to fulfil his mental and economic requirements.

Reasons for self- preservation: The society in which the human survives is very complex in nature. The human needs to eat to satisfy his hunger, wants a good and comfortable shelter, he never understands that which situation will lead him to the worst experiences of life. To secure the life, the human society has become dependent on the economy.

Basically to lead a good and respected life a man needs a good food, shelter, water, sunlight and vitamins. Without these substances, the human life does not exist as the main two basic purposes of life is to live and reproduce. Greed is to get everything with a larger piece of pie. (Taflinger, 1996)

How Sociological Factors Affect a Person's Behaviour: While living and surviving in a society a human being faces many circumstances that mould his personality and those factors put an impact on his behaviour. Certain factors are:

Culture: According to Gregorio Billikopf of the University of California, the indicator of a human’s behaviour with others is the reflection of his heritage. The behaviour is considered with the greetings, eye contacts, respect for others and the social contact with the others. This is influenced by the cultural backgrounds. A human is understood by his social behaviour and it affects his life at personal and professional levels.

Socio economic status: The most important factor that influences the human’s social behaviour is his socio economic status in life. The human being is always under a pressure and facing a competition in life to attain the best life and comfort. For this he faces many ups and down in life along with the pressure to live a sustained life. The stress changes his mental conditions and behaviour in life.

Environment: The behaviour of a human being is influenced more by the environment and the people around rather than the genetics. Factors like the disconnection with the family, communication gap, poverty, lack of discipline, abusive language and the feeling of being neglected brings out the negative behaviour of a child.

Education: From many scientific studies, it is analysed that the economy of the country rises, the crime rate falls down, the overall health is increased and the voter registration is higher if the education percentage is high in a specific area. This shows that education plays a vital role in enhancing the positivity in a human behaviour. (Moechest, n.d.)

LO3: Understand how psychological theories are applied to health and social care practice.

During the end of nineteenth century many neurologists actively participated and carried out many researches about the prime cause of the mental disorder. They understood and analysed the brain working with system and many theories were discovered. Here are some of the specific psychological theories that inform the understanding of mental disorders.

William James in his work about principle of Psychology and that is the control and attention of the mind over the body. The psychological principles are impacted by factors affecting the behavioural change in the health and social care settings:

Analyse how psychological theories can enhance understanding of relationships in health and social care.

Psychology is the study of the behaviour and mental process with the help of which the people working in health and social care sector can comprehend the requirements of all the patients taking the treatment under the mental disorder segment. The patients want extra attention and this can be provided to them only if the workers of health and social care sector are well educated about the psychological theories to correlate them with the patients and provide them the best possible treatment. The workers analyse the psychological perspectives like Biological, Psychodynamic, Behavioural, Cognitive and Humanistic. The study makes them to understand the person and his requirements. (Blackwell Publishing, n.d.)

Conclusion:The above report is the explanation of the analysis and working style of the workers of the people in health and social care sector and comprehend the psychology of the individuals with mental disorder to provide them the best possible treatment.

This Unit 15 Psychology for Health and Social Care Assignment gave a thorough knowledge about the working style of social and health care sector. The psychological theories demonstrate and explain their relation with the human life and behaviour. It explains the psychological changes in a human being in every stage of life and how he manages to deal with them that create the changes in his own behaviour.