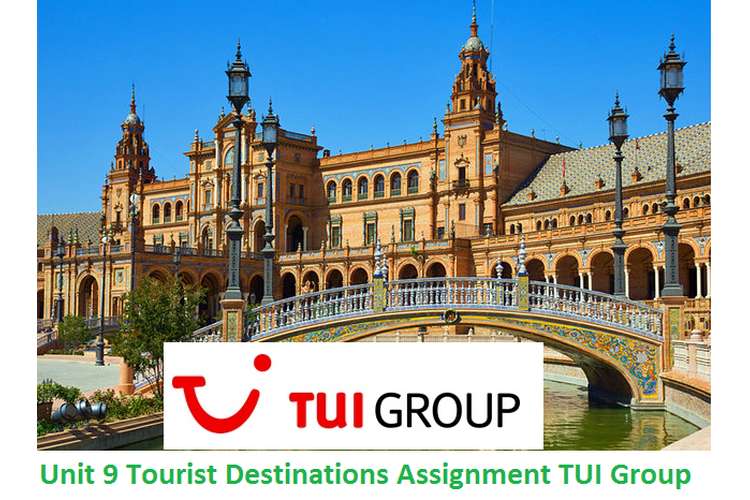 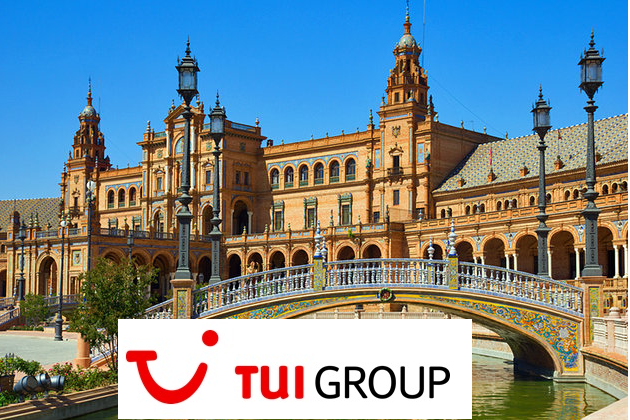 Subject: To provide information about the challenges in tourist destinations UK and worldwide.

London is the biggest city of Western Europe with population of more than seven million people. It is a multicultural city having people belonging from all parts of the world. The green environment at London covering 39% of total area and a large number of visitor attractions makes it one of the topmost tourist destinations of world. The places of tourist attractions in London are Big Ben, The Palace of Westminster, The River Thames, Buckingham Palace, London eye and many other places for visit. There are 36.1 million overseas visitors to UK with spending of £22.1 billion in the year 2015. UK accounted for 2.9% of global arrivals and 3.4% of international tourism receipts of the world. The inbound tourism is reported to be 54% in London, 34% in England, 8% in Scotland and 2% in Wales. The value of inbound tourism is forecasted to grow over £ 57 billion by 2015 which was £21 billion in 2013. (Caviar, 2015) 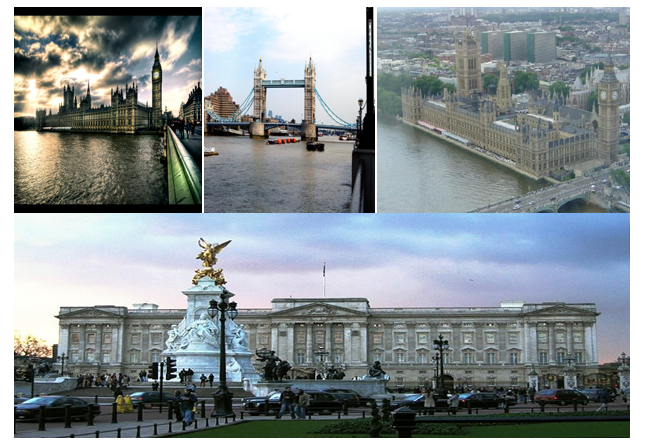 Paris is the topmost tourist destination of the world as ranked by UNWTO in 2014. The number of international visitors was more than 84.7 million in France in the year 2013. The tourist attractions such as beaches and resorts, ski resorts and rural regions, villages with quality heritage etc contribute in making it most popular tourist destination worldwide having visitors from Germany, United Kingdom, USA, Netherlands, Italy Spain etc. Paris which is the capital of France is the foremost city of France with cultural interest. Paris comprise of most visited museums and renowned landmarks such as Eiffel Tower, the Arc de Triomphe, the cathedral of Notre-Dame or the Sacré-Cœur,  Cité des Sciences et de l'Industrie, Louvre and  Musée d'Orsay. Other tourist places include French River, Provence and Loire valley.

Spain is the country which has popular tourist destinations particularly for summer holidays. The popularity is mainly due to the museums at Barcelona and Madrid. The other tourist destinations in Spain include Gothic Quarter at Barcelona, Park Guell with sculptural buildings, Casa Mila, Casa Batlo, Museo Nacional Del Prado, Mosque of Corboda, Royal Palace of Madris, Sagrada Familia etc. The number of international tourists in Spain was 64.9 million in 2014 and 68.1 million in 2015 which was the major reason of economic recovery of the country. Most of these visitors were from Germany and France.

China is one of the most popular countries for international tourists who fascinate tourtists due to cultural diversity, ancient cities, fast modernization etc. It has been ranked as third most popular tourist destination after France and US by UNWTO in 2014 but if Hong Kong and Macau will be included it will become number one tourist destination of the world. The travellers to China comprised of 98.8 million people in 2015 which was 26 million in 2014. The major tourist destinations include Great Wall of China which is one of the seven wonders of the world, Forbidden city, Terracotta Army, Potala Palace, Summer palace, The Bund, Temple of Heaven, Huangshan mountain, Weat Lake, Yu Garden, Ming Tombs, macau caves etc. (Vilchez, 2012) 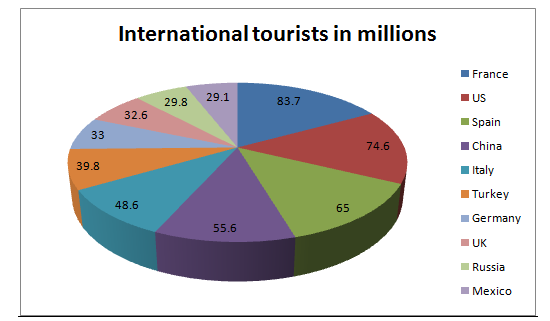 The above chart shows that the maximum tourist arrivals are in France and US and United Kingdom has been ranked eighth in topmost tourist destinations of the world. However  travel and tourism industry  is a growing sector worldwide therefore the newly developed tour products which are likely to be developed by TUI Group will be successful in the tourism market since the number of tourists in UK as well as throughout the world is continuously increasing and is expected to rise up to a good level in near future. The trends of international receipts and expenditure related to tourism in different countries can be represented from the following charts: 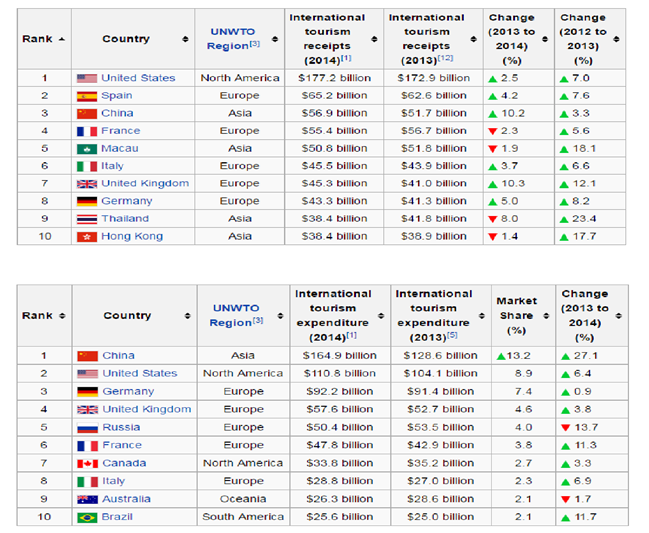 From the above data it can be analysed that the highest receipts from international tourism in the world is reported to be from United States whereas the highest international expenditure on tourism is highest in China. United Kingdom ranks at seventh place in terms of international tourist receipts and fourth in terms of international tourist expenditures. The decline in tourist receipts can be seen in Thailand, Macau, Hong Kong and France as compared to previous year out of which maximum is in Thailand being 8%. This means that the income generation from tourism in these countries is likely to show a declining trend in future also. Similarly the decline in expenditure is found in Russia and Australia but the market share is constant which means that these countries will be able to achieve growth without increase in tourism expenditure. (Pang, 2011). Thus, from the above analysis of current and future trends in different countries in travel and tourism sector it can be concluded that tourism industry is a growing sector and the new tour products to be developed by TUI Group will be appreciated throughout the world. Therefore the product manager is recommended to con=side the above mentioned facts and analysis while making decisions about the tour products.

As a business development analyst, the comparison of appeal of leading tourist for the developing tourist destination can be done by the following analysis.

Evaluating how characteristics of a tourist destination affect its appeal with reference to Cuba, North Korea or Burma.

Analysis of issues affecting the popularity of tourist destinations 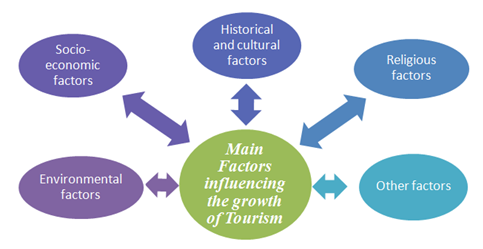 Therefore the senior sustainability executive shall consider the above mentioned issues for deciding about the sustainability of TUI Group. (Mawby, 2016)

Magazine Article to be published in Travel and Tourism Gazette

The host community which consists of travel agents and tourism companies and tour operators play a crucial role in the responsible tourism to be provided to worldwide tourists at various tourist destinations located at different parts of the world. Responsible tourism refers to as the provision of tourism services by the host community of tourism sector in the best possible interest of tourists. This relates to providing them with comfortable accommodation and quality food and proper guide for visiting the best tourist attractions which meet their purpose of visit. The improvement of responsible tourism can be done only through enhancement of host community at far accessible places of the world. (Silvar, 2015). TUI Group is one of the leading part of host community of tourism sector withy wide range of operations worldwide. Both of its divisions TUI Travel and TUI AG have good reputation in tourism business and have the potential to achieve sustainable performance throughout. The purpose of responsible tourism toy enhances the host community at worldwide tourist destinations can be easily achieved by the efforts of TUI Group. It is presently operating in Europe, Turkey, Cuba, Mexico, Dominican Republic, Jamaica, Costa Rica, Egypt, and Thailand which are far accessible places of the world. Thus the company has the potential to enhance the responsible tourism for the tourists who intend to visit these places. The provision of services related to accommodation, food and availability of other basic amenities at these places is a crucial factor in the enhancement of responsible tourism. These places are far from the reach of tourist and are also considered as good tourist destinations if the availability of hospitality services ids provided to the tourists at these places. The portfolio of TUI Group consists of more than 1800 travel agencies and online portals having worldwide access. Apart from this  Ryanair airlines  with 130 aircrafts, more than 300 hotels with 210,000 beds 13 cruise and infinite number of agencies at holiday destinations across globe are the facts which ensure that the company is capable to support holiday and tour experience to more than 30 million customers in 180 regions of the world. Thus TUI Group has undoubtedly the potential and capability to enhance the host community across the globe at all the possible tourist destinations so that the objective of responsible tourism is achieved by the host community of tourism sector of which TUI Group is a large part. (Costa, 2010)

From the above mentioned analysis in the assignment which relates to the case study of TUI Group it can be concluded that the tour operator company is a leading giant in the business of tourism throughout the world. The analysis of different tourist destinations and the data related to the facts and figures about the tourism information at these places will be helpful for the company in deterring the issues which affect the tourist destinations and develop its tour products in accordance with the analysis of the information govern in this report. The objective of sustainability development and improvement and making decisions about development of business through new tour products can be achieved through consideration of facts and information mentioned in this report. (Amegger, 2016)

This Unit 9 Tourist Destinations Assignment TUI Group relates to the case study of TUI Group which is leading business of travel and tourism sector worldwide,  Locus Assignment Help  in UK posting free units solutions so scholars can explore assignment help and get review the quality of our work.