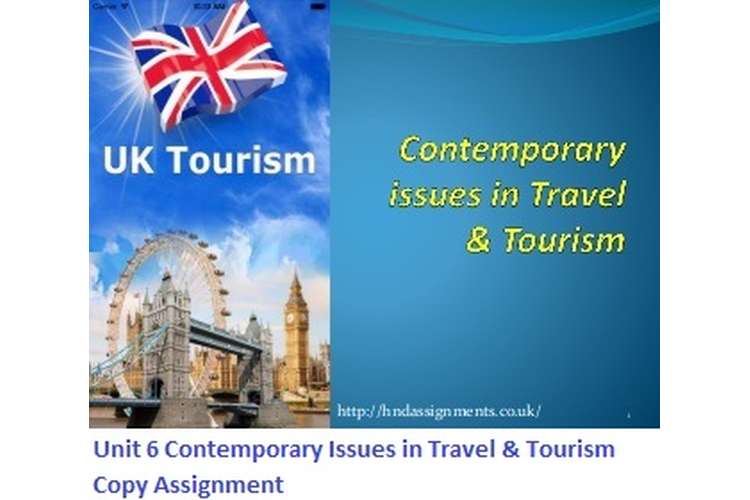 Travel and tourism sector is one of the most attractive sectors which are facing many contemporary issues which are hampering the growth of the industry. With the development in the industry, there are many factors which affect the global tourism. The Unit 6 Contemporary Issues in Travel & Tourism Copy Assignment covers many issues which are currently taking place in the tourism industry and is enhancing or destroying the tourism business of various countries. The discussion about the niche sector of tourism has also been discussed and further the strategies have been discussed for British airways and Iberia airlines. It has also been discussed that what consequences the business have to face when it is not able to respond to the changes in the market. (Baloglu, 2010) 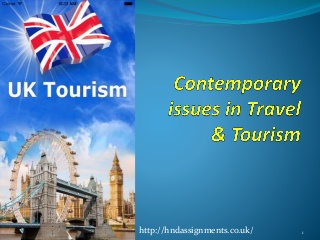 The selected tourist destination for discussing the current issues is United Kingdom. UK is one of the most favourite tourist destination in the world and the no of tourists visiting to UK are huge in numbers. It is because UK is rich in the heritage and cultural factors and also there are many tourists’ destinations which are contributing a much amount to the nation’s economy. There are some places which attracts most of the tourists coming to UK which are London, Edinburgh, Manchester, Liverpool and many more. These places are the key tourist destinations and the government is putting more efforts in increasing the numbers of tourists visiting every year (Campbell, 2012).There are many issues which are driving the change in the travel and tourism sector of UK, these issues are discussed below:

1.2 You should analyse at least two different current issues using appropriate methods and resources in depth focusing mainly on the impact of political unrest in the Middle East and North Africa, terrorism and counter-terrorism measures, severe weather, local and international laws.

There are certain factors and issues which affect the tourism in the countries. These current issues include the terrorism activities, local and international laws or the severe weather conditions. These issues are discussed below: 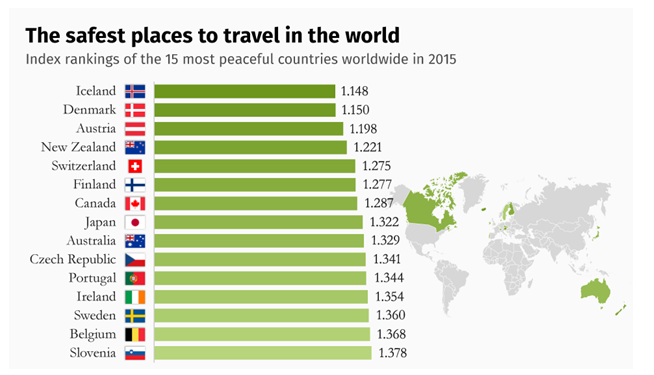 International Airlines Group is one of the largest airlines group and it has around 533 aircrafts which flies to more than 250 destinations. It stands on the third position in Europe and sixth across the world on the basis of revenue. It is the parent company of British Airways, Iberia, Aer Lingus and Vueling. International Airlines Group can respond to the changes and for analysing those factors, it is important to do the analysis of Strengths, Weaknesses, Opportunities and Threats which can be done through SWOT tool (Christou & Gretzel, 2012)

The SWOT analysis of International Airlines Group is given below:

Another tool is PEST analysis to study the environment of IAG group, which is given below:

3.2 Develop strategies on how International Airlines Group businesses such as British Airways, Iberia, Vueling and Aer Lingus could respond to change. You need to select and develop strategies for at least two businesses. Provide detailed explanation of your strategies.

International Airlines Group has to develop many strategies in order to respond to the changes in the market. The strategies which are selected and developed for the two businesses British Airways and Iberia airways are given below:

British Airways is among the leading airlines in UK. The main elements which are needed to develop strategies of British airways and Iberia airways, which are also a subsidiary airline company of IBA group, are given below:

The businesses can adopt from one of the following strategies given below:

3.3 Justify strategies for how selected International Airlines businesses could respond to change. Your strategies in 3.2 needs to be clearly justified with supporting arguments.

The strategies which are discussed in the above task for British airways and Iberia Airlines can be very beneficial for the success of these organisations. Product development strategies can be helpful in attracting more customers to British airways and in making it the top airline company in UK. PEST analysis and SWOT analysis helped the company in understanding the current needs and demands of the consumers and their expectations which can be fulfilled by the airline companies. The company can take benefit of the sports and other events which takes place in UK and can design its new products (David & Rachael, 2009). Iberia can do marketing development to capture more markets and for this they can advertise themselves in the new markets to make customers aware. They can take help of Internet and social media for the development of new market for their products.

There are many issues and trends which drives change in the travel and tourism industry. These are the issues which also affects the businesses of Thomas cook, The Travel Network Group or Myla travel agency for which I work. These changes can be political, technological, economical or social. These organisations have to adapt to these changes in order to function properly in future and to move ahead in the market. Myla agency is the travel agency which has around 10 offices in UK and the travel company giant Thomas Cook is planning to expand its business with Myla Travel and the company also has an invitation to join The travel Network Group (Nand, 2012). The trends and issues in the sector will decide the future of Myla agency:

Market is highly competitive and the customers are more demanding than ever before which forces the organisations to provide better quality services and for this they need to adopt the changes in the markets which can be in political, economical, cultural or technological form but if the organisations fail to respond to these changes in the market, it has several consequences:

So, it is clear that when the companies are not able to respond to the changes in the market, they usually lose their market share, customers and business in the market.

It can be concluded that due to globalisation, Travel and Tourism industry has seen a major change and has seen an immense growth. There are some current issues which affect the tourism in various countries like political unrest or terrorism activities which have resulted in the decline of tourists. Different business strategies have also been discussed for British airways and Iberia airlines. These above discussed contemporary issues plays a very important role in the travel and tourism industry and these can be taken into consideration for future success and growth of the travel industry.

The Unit 6 Contemporary Issues in Travel & Tourism Copy Assignment covers many issues which are currently taking place in the tourism industry and is enhancing or destroying the tourism business of various countries, Locus Assignment Help UK posting units solutions so scholars can explore Assignment Help in UK and get review the quality of our work.