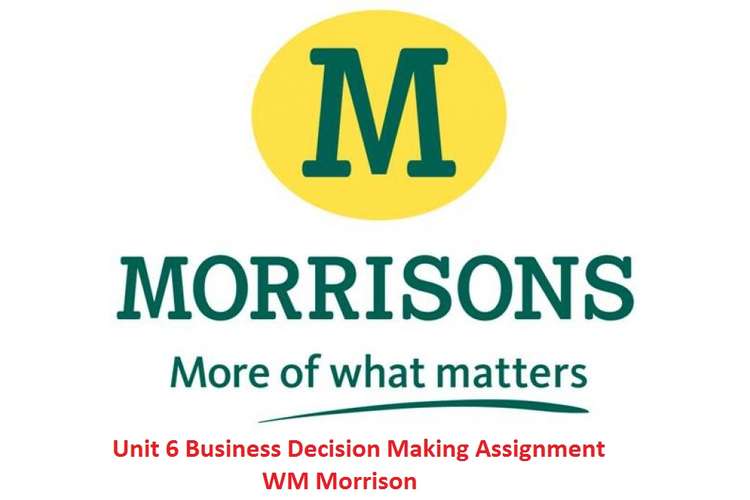 Business Decision making refers to as the process of identification of business problem, gathering data related to the problem, analysis and evaluation of facts and figures and drawing conclusions on the basis of which decision is made to select the best course of action to solve business problem. This unit 6 business decision making assignment WM Morrison aims at assisting WM Morrison which is a food discount retail store in London in solving its business problems based on the information provided in accordance with the evaluation of data gathered from the survey into the consumer behaviour and attitude towards food discounting retailing stores in Greater London. 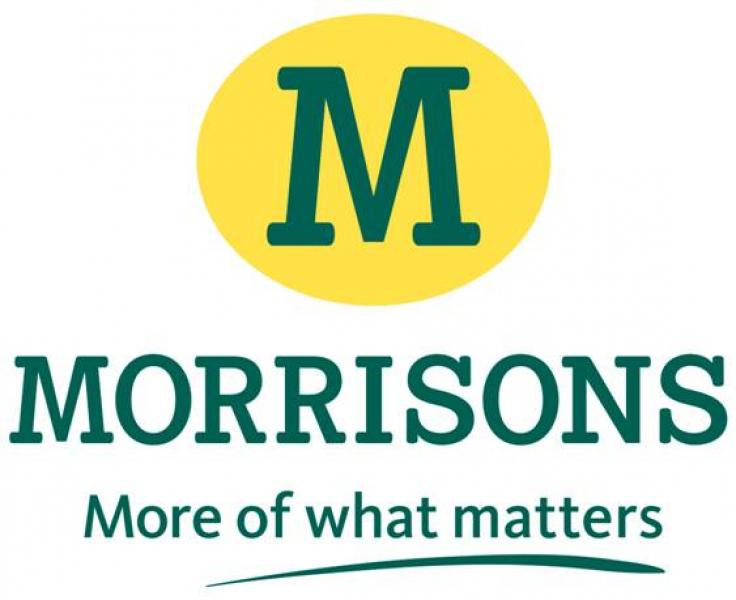 P1.1 Plan for collection of primary and secondary data

P1.3 designing of a questionnaire

Please answer the following question by marking a tick on the most appropriate answer in your opinion as a part of survey into the consumer behaviour and attitude towards Food Discount Retailing by WM Morrison:

3. What is your working status?

4. What is your annual income?

5. Are you local resident of Greater London?

6. Do you shop at food discount retailing stores?

7. What is the distance travelled by you to your regular grocery shop or food discount retailing store?

8. Do you use food discount retailing schemes vouchers or discount coupons for purchase of grocery or food items?

9. Which food discount retail store will you prefer for purchase of grocery or food items out of these four retail stores?

10. Which factor do you consider most important while selecting the grocery shop or food discount retail stores?

11. What is monthly expenditure at food discount retail stores?

12. WM Morrison is the best food discount retail store in Greater London. Do you agree?

The responses received from respondents through questionnaires filled in by them as the part of survey into the  customer satisfaction  behaviour and attitude towards the food discount retailing stores in Greater London for WM Morrison on various aspects of research included 43% female and 57% male respondents. There were 28% respondents between the age of 18 to 25 years, 40% were those belonging to age group of 26-35 years, 20% were from age group 36-50 and 12% were above 50 years of age. As far as working status is concerned, 10% were government employees, 56% were businessmen, 22% were private employees, 2% were unemployed and 8% were those who did not work and were dependents. The income of various respondents was as follows:

Out of total respondents 85% were the local residents from London and remaining 15% were visitors. 62% said that they visited food discount retail stores regularly, 23% sometimes visited, 5% never visited and 10% visited always. Most of the population used the food discount coupons and vouchers while shopping at retail stores and a very little of the respondents were those who never use them. The responses for the most preferred store were as follows:

The responses received for most important factor to be considered by customers while shopping at food discount retailing stores are as follows:

The responses for monthly expenditure on food discounting retail stores made by customers are as follows:

The responses about how many people agree that WM Morrison is the best retail store in Greater London included the following responses:

Mean – It represents the average of responses or figures included in the set of data. It is calculated by adding all the values and then dividing it by number of values. The formula and calculation of mean is as follows:

Mean = Sum of values/Number of values

Mode – It represents the value which occurs most often. If no value is repeated in the series or set of data, there will be no mode of the values. It is the highest frequency of the data values.

Since no value is repeated, therefore there is no mode of these values.

From the above calculation of representative values and summary of data by using the responses received from the survey into the customer attitude and behaviour towards food discount retail stores in London for WM Morrison it can be observed that the mean of the responses about how many people agree that WM Morrison is the best food discount retail store in London. This means that the average responses received for this view is 20. The median of responses is 22 which means the most middle value of responses is 22. Thus the probability of falling the value below and above 22 is equal. There is no mode of the responses which means no value is repeated. Apart from this other conclusions that can be made from the summarised data include that out of the four biggest food stores in London namely WM Morrison, Js Sainsbury’s, Lidl Ltd and Aldi, highest number of population prefer WM Morisson for shopping of  food items safety  and grocery products. It can also be concluded that out of the factors contributing the selection of food discount retail store, price of the products, quality of products and the discount coupons and vouchers are considered as the most important factors by most of the population. The monthly expenditure of most of the people at these stores range between £2,000 to £5,000.

The standard deviation of the responses about WM Morrison being the best food discount retail store in London is 11.31 whereas the mean is 20. It means that the mean of 20 can deviate on either side by 11.31. There are chances that the responses received can be different by 11.31 % of the population. This denotes the risk of mean of responses about its variation.

The range of the responses is 32 which means that the difference between any of the two values of the data is not greater than 32. This indicates that the values are close to each other and lie between 6 and 38.

P2.4 Explanation of how quartiles, percentiles and correlation coefficient are used to draw valid conclusions

From the above chart it can be concluded out of the four big food discount retail stores in Greater London most of the customers prefer to shop at WM Morrison and Js Sainsbury’s. It means they both are the major competitors of each other however Lidl and Aldi are also not far from the competition. Thus WM Morrison is already popular among the buyers in London. 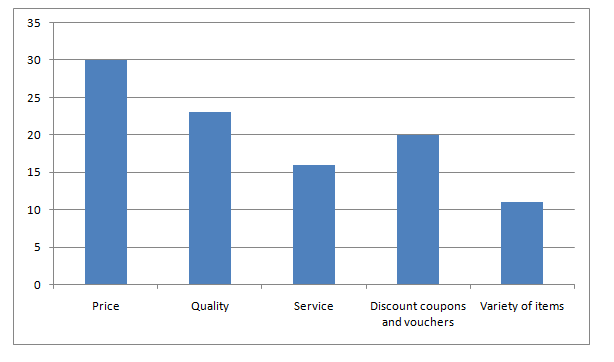 From the above chart it can be observed that out uf all the factors that contribute to the selection of food discount retail store for purchasing the grocery and food items the price of products quality of food items and discount coupons offered by the retail stores are the most important factors. Least consideration is given by the customers to the variety of items available at these stores. (Webber, 2014) 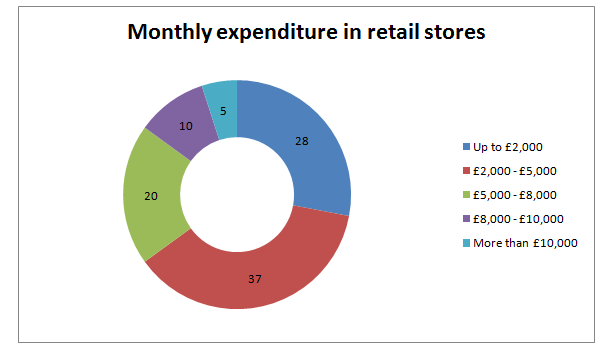 The above chart shows the monthly expenditure of customers at the food discount retail stores in London. It can be concluded that large number of customers includes those who spent amount which range between £2,000 - £5,000 and up to £2,000. The expenditure goes above £10,000 for a minimum of people. 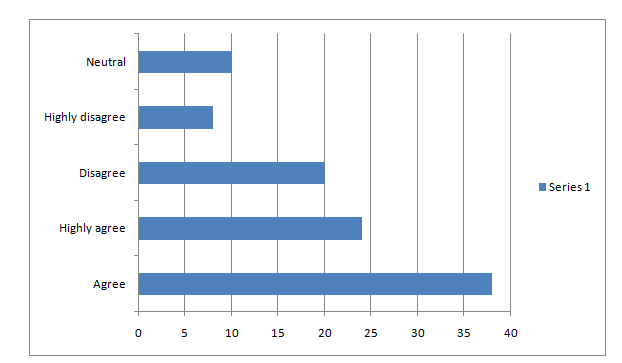 From the above chart it can be concluded that a large part of population including the customers above the age of 18 years agree that the WM Morrison is the best food discount retail store in London. A few people highly disagree to this view.

The sales revenues of four food discount retailers in UK are as follows: 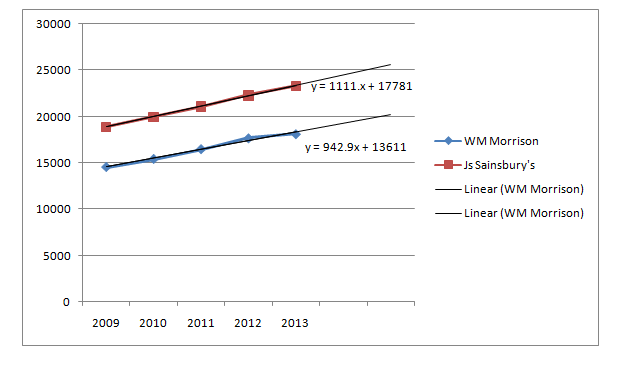 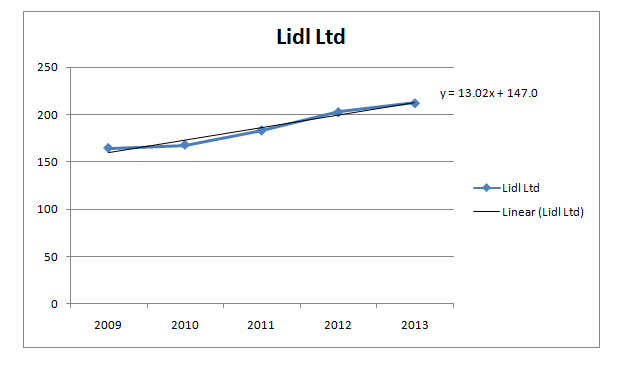 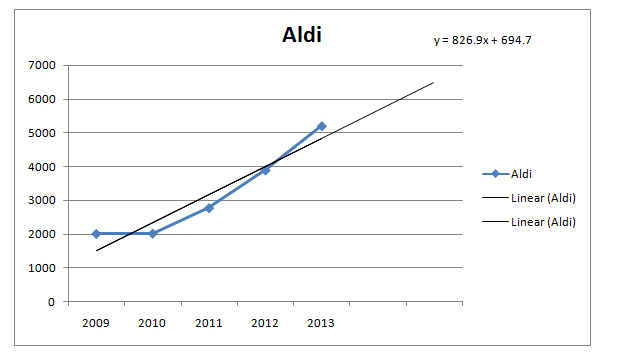 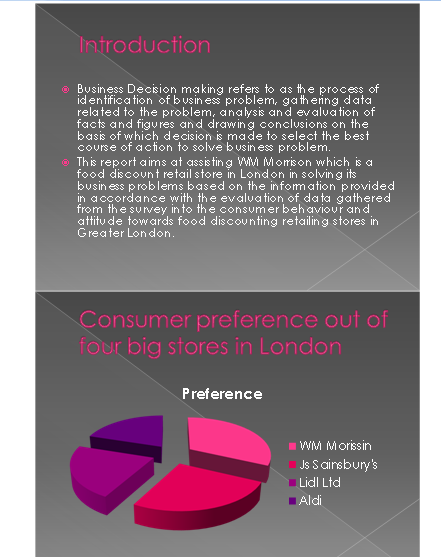 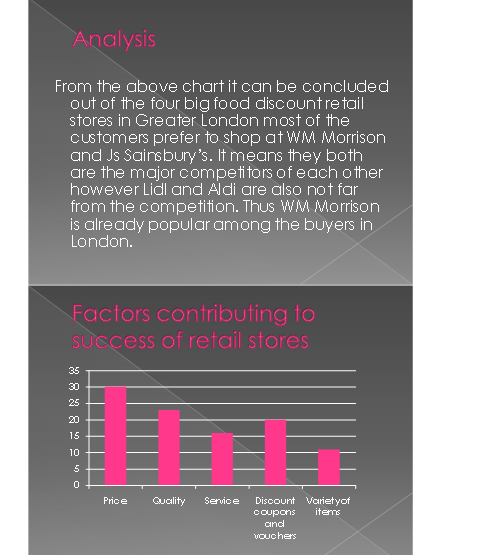 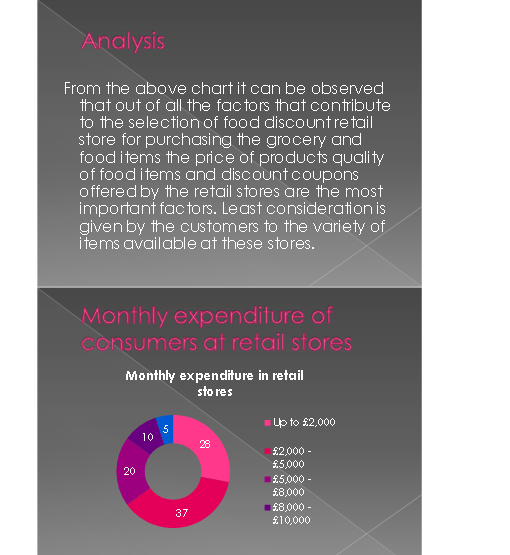 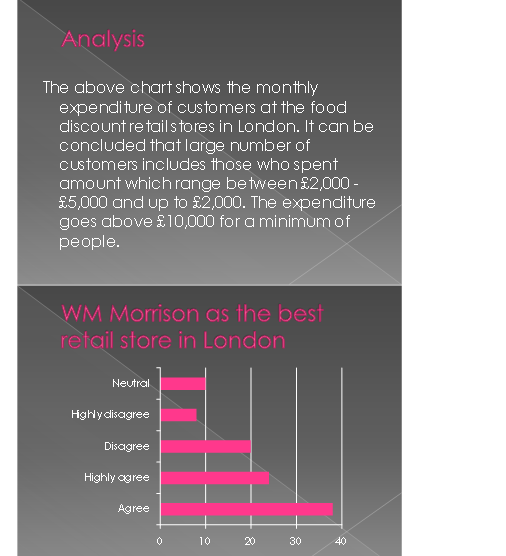 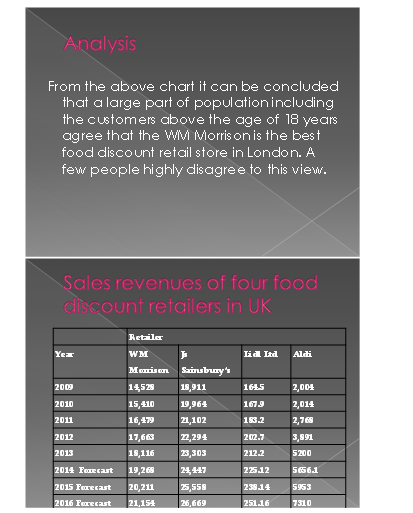 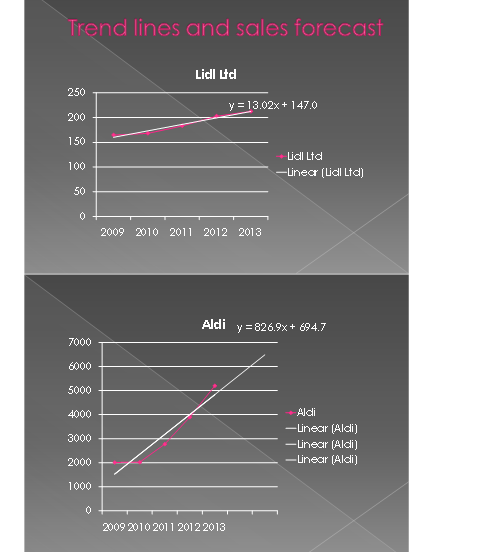 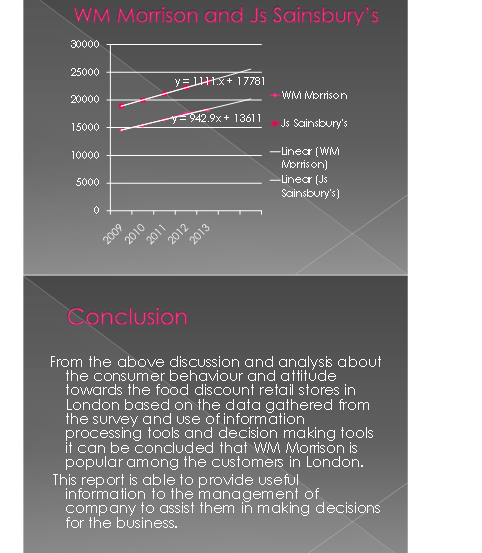 To,
The Management,
WM Morrison Plc

Subject: To provide information about threats of discount food retailers and ways to respond these threats.

This report aims at providing information based on the analysis and conclusions drawn from the data gathered through the survey into the consumer attitude and behaviour towards food discount retailing in London for WM Morrison. The threats to the company and ways to deal with them are mentioned in this report.

From the survey data analysis and evaluation it can be observed that the company is doing well in London but there still exist certain threats which have to be dealt with. The biggest of them is the growth and enhanced performance of its competitors which mainly include Js Sainsbury’s, Lidl Ltd and alder. The customers consider price and discount coupons and vouchers as most important factor in selection the retail store. These companies are offering best prices with heavy discounts to attract more and more customers. In order to deal with the threat of increasing competitors and shifting of existing customers the company need to take immediate actions by revising its pricing strategies and standards. Since quality ibis also the preference of major population the focus shall be shifted on improving the quality of product at store and offering attractive discounting vouchers and coupons to attract customers.

It is recommended that the company shall adopt the revised strategies to cope up with the threats and business problems and it can be concluded that through effective methods and strategies the company will be able to convert its threats into opportunities.

Operational decision making refers to as the decisions for WM Morrison which relates to the operations of company whose supervision is performed by the lower level management of company. Tactical level decision making involves middle level managers which perform observation, controlling, decision making, and other managerial activities. Strategic level decision making involves senior level management who handle strategic issues for the company through planning the processes. The information processing tools that can be used by the company at various levels are Management Information system (MIS) at strategic level, Transaction Processing System (TPS) at operational level and Decision Support System (DSS) at tactical level.

P4.2 Plan for activity and determination of critical path

The details of the project including the activities to be carried out can be represented using the following table and network diagram: 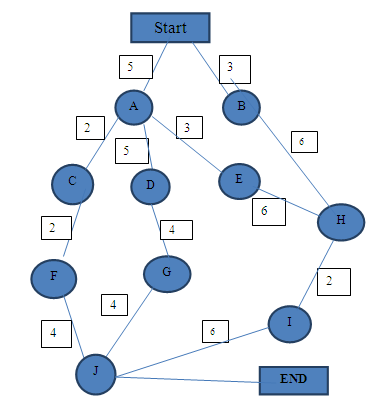 The various paths on the above network diagram are as follows:

The action plan that will be undertaken for the new product development is represented in the following Gantt chart: 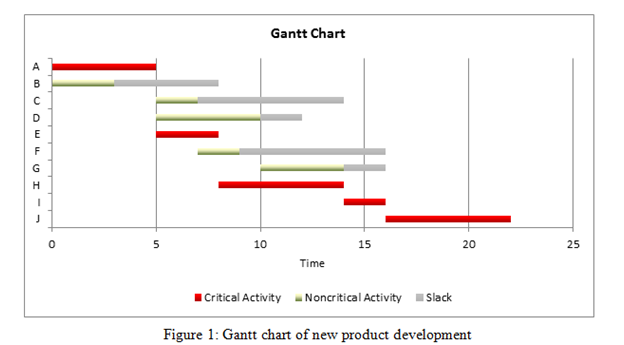 WM Morrison Supermarkets Plc intends to evaluate the financial viability of two proposed capital investment projects, Project and project B as the company can invest in only one project. The cost of capital for both the projects is 10% and initial investment is £500,000. For assessing the viability the financial tools such as NPV and IRR can be used by the company for making decisions. The calculation of NPV and IRR for both the projects made using excel is as follows:

From the above discussion and analysis about the consumer behaviour and attitude towards the food discount retail stores in London based on the data gathered from the survey and use of information processing tools and decision making tools it can be concluded that WM Morrison is popular among the customers in London. This report is able to provide useful information to the  management resources  of company to assist them in making decisions for the business. Also the formal report addressed to management has provided them the threats to the company and the ways that can be used to deal with these threats.