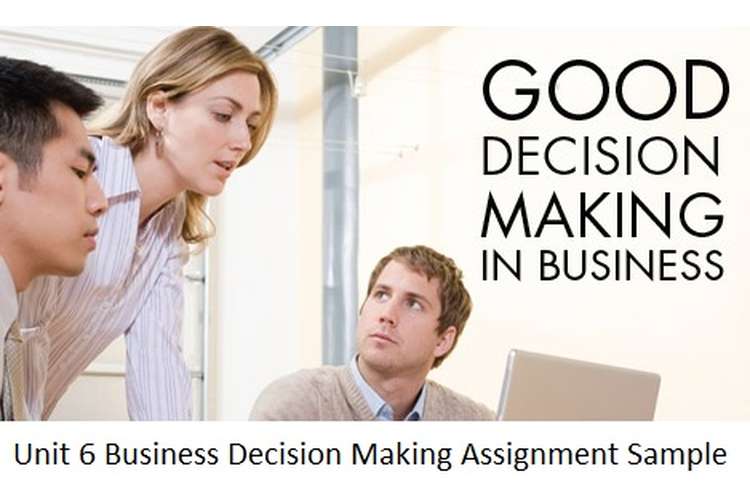 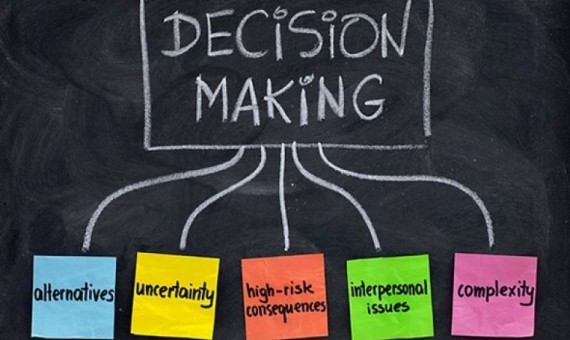 1.1. Create a plan for the collection of primary and secondary data for a given business problem.

Primary data collection is the first hand data that is gathered for the first time. It is relevant and more focused as data are collected for the first time so there is less chance that data would be manipulated. There are various ways in which data can be collected for the first time like questionnaire, survey, interviews and many others. In this research the data would be collected from the men and women in relation to the preferences that they possess in the coffee as well as their choices so that a proper analysis may be taken into account (Akdere, 2011).  The data that is collected would be from a certain population who also are the coffee lovers. To accomplish this task a questionnaire would be maintained in which all the relevant question in relation to the research would be mentioned that can be further analyzed in an effective manner.

Secondary data is the data that is already present and evaluated by the different person. Data that is collected are both internal as well external that can become helpful in the research (Akdere, 2011). This type of data collection is cheap and easy as well as fast that helps in the easy conduction of the research. Sources in this research in relation to the coffee can be avail from the internet sources along with the statistics trends and records of the customer’s preferences. Secondary sources are easily available and easily be understandable.

Plan for the collection of all the required data-

Methodology used in the survey is often discussed as the best practice used in the relation to the better sampling of the population. In this research the best and most suitable way of survey would be through the survey distributed to the population so that no wrong aspects would be taken into account. Another concept that is used in this research is sampling frame that is used to draw out the source from the material (Drummond, et. al 2011). There are different sampling frames present to perform the task in an effective and efficient manner. There are two types of sampling i.e. probabilistic and non-probabilistic sampling. This is further divided into many parts. Some of the sampling methods are illustrated below-

Random systematic sampling- It is the selection of the imperative data from the population at every particular time or interval.

Cluster sampling- There is the random selection of the data from the population that is already divided into cluster. It is an easy form of sampling that can be done within the time limit.

Stratified sampling- This approach is similar to the cluster but in this population is divided in to the strata from where there are more chances of the relevant data (Fox, et. al 2010). The data that is selected is in the form of proportionate manner that can easily be understandable for the purpose of research.

In this particular research the best and effective way to perform the sampling is by stratified sampling along with the random systematic sampling. Both this method would be effective as the data that is collected would be easily sampled by the above mentioned methods in a faster and more accurate way. For the better analysis of the data there two sampling would be best sources to accomplish the further task (Fox, et. al 2010).

1.3 Design a questionnaire for a given business problem.

Question 3- What do you prefer?

Question 6- Do you drink coffee daily?

Question 7- How many times you drink coffee in a day.

Question 10- Would you like the new taste in the coffee?

From the above questionnaire the research can be conducted in relation to the new coffee brand that is about to be launch in the market. This can become the most relevant source in the research.

In the table given below the mean of the data is calculated in an effective manner.

Mean is the average of the data that is obtained by dividing total collection by the number of collection. Mean is basically used in the context of the central tendency to obtain the data in a proper manner. From the above table mean is derived by ∑f*x/∑f.

Analysis- From the above calculation it be said that on the average basis Stephanie takes 50.26 orders in a day to accomplish its task of business (Iqbal, et. al 2012).

In the given table median is calculated-

Median is the mid or the middle term of the data. It is used in the central tendency to determine the typical value from the available data to take the analysis of data in an effective manner. In the given scenario the median of the data is calculated as follows-

Analysis- From the calculation median is derived as 51.18 which is the middle value of the data set in the table (Jackson, et. al 2013).

In the given table mode is calculated-

Analysis- 55 is the mode of the given data set which shoes that it occurs the maximum number of times in the observation (Jackson, et. al 2013).

2.2 Analyze data using measures of dispersion to inform a given business scenario.

The range is calculated by subtracting the lower value from the upper value of the given set of data. It is important that the dispersion of the smaller data set is presented in an effective manner.

Standard deviation of the given data is 24.40.

Quartile is the data that is divided into four groups. The lowest quartile is the number that lies between the smallest value and middle value of the given data.

It is the middle value of the given set of data and it is denoted as Q3 (Mori, 2010). It is calculated by divided the median to the higher half of the value then the median is derived that is also called Q3.

It is the difference between the upper and the lower quartile.

Importance of quartile and correlation coefficient

It is the important tool in relation to the taking decision for the company. Like, coefficient of correlation shows the relationship between the two variables that become an important aspect in context of taking decision for the business. As with the change in one variable the other variables also changes significantly (Oderanti, et. al 2010). On the other hand quartile also shows the importance in relation to taking the most effective decision in the business so the smooth operations may run in the business as the calculation of the median shows the middle value which become a significant measure in the effective working of the business as well to conduct its business by analyzing all the parameters in an effective manner.

3.1 Line and bar chart and there analysis. 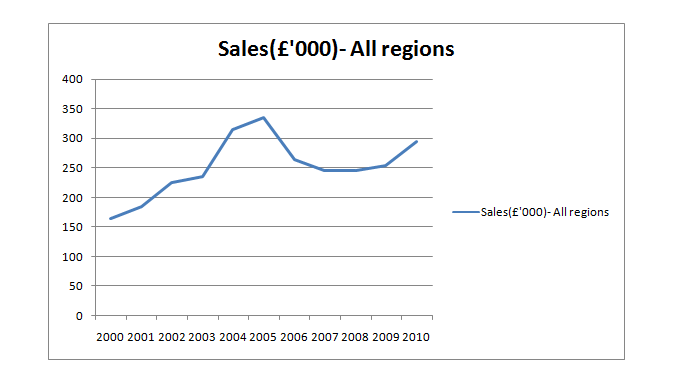 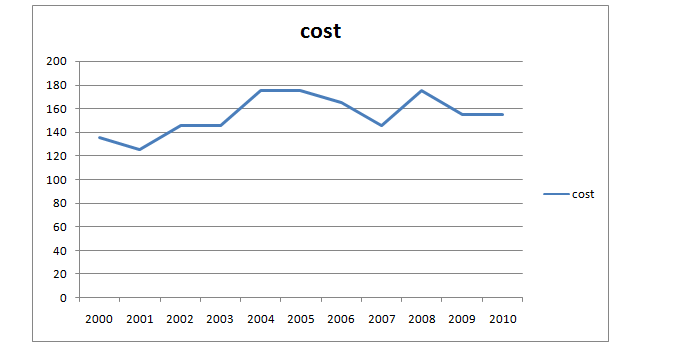 Analysis- The cost of is also showing uneven pattern in the business. But in the current scenario cost of the business is stable that is good for the business but now business has to work more hard to make it low. 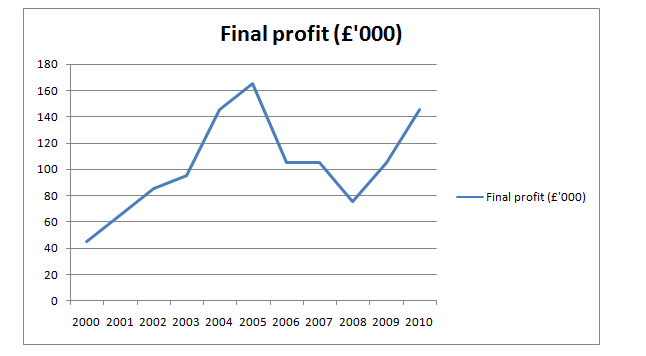 Analysis- The movement of the profit is uneven. In the business it is not a good sign as it shows that correct decision making is not happening in the business in the corrective manner (Oderanti, et. al 2010). 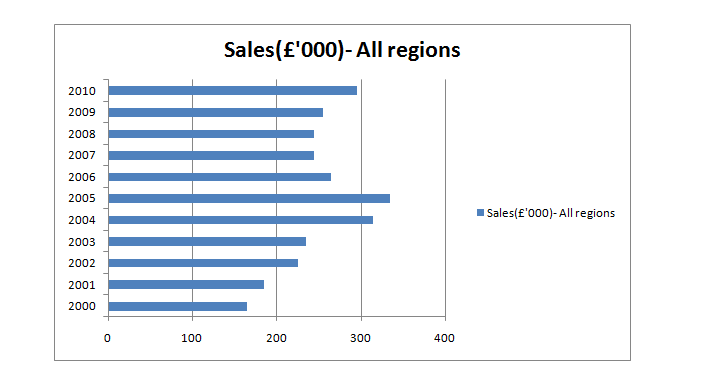 Analysis- Bar chart is showing that the highest sales are in the year 2005 and then it reduces to the great effect. But now there is the improvement in the sales that shows that correct strategy is used by the business. 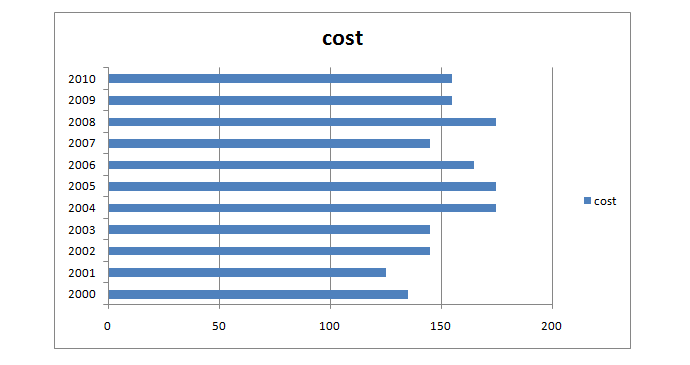 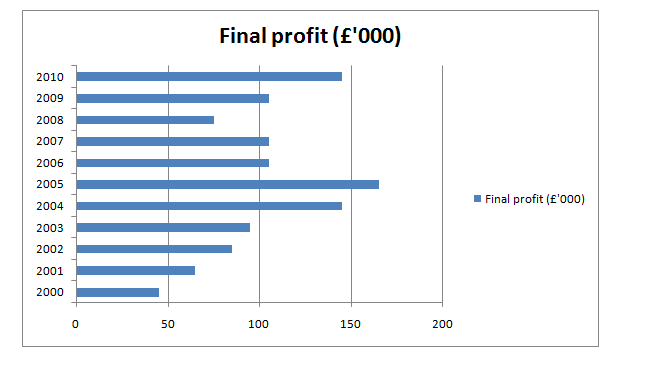 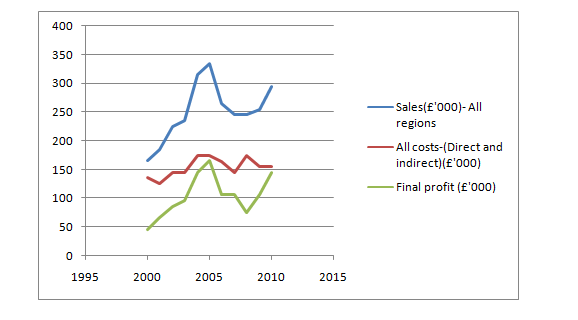 Analysis- The business trend line is the most important concept that is shown in the business. It can be seen that business has shown a downfall in the previous years but with the correct strategy and its implementation there is the significant performance of the business that would become helpful in the long run (Runcie, et. al 2012). 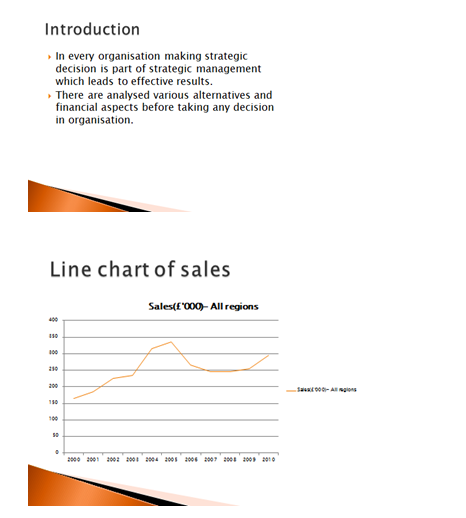 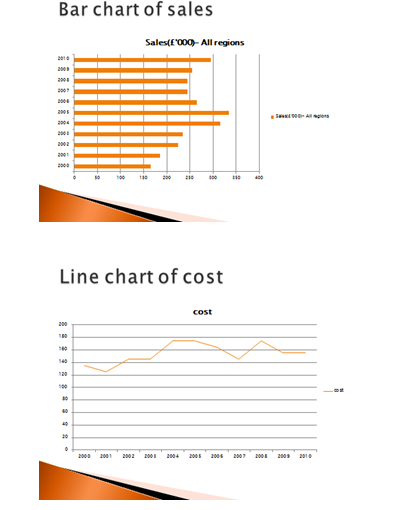 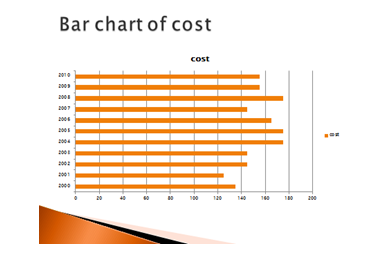 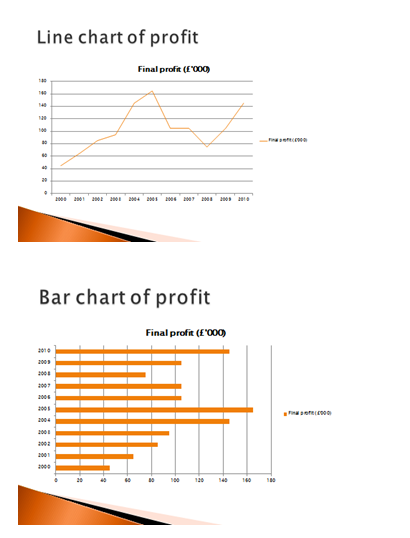 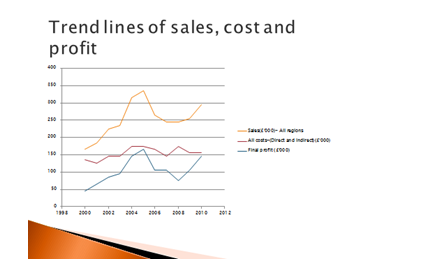 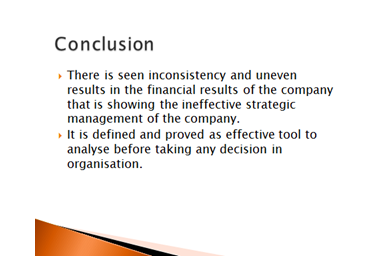 Subject- Relationship between sales, cost and profit and importance of forecasting.

Sales, cost and profits are interrelated and interconnected to each other’s. Cost is the amount that is spends by the business for the purpose of its running in an effective manner. Sales are the products that are sold and the receipts that are generated from it. When the sales exceed the cost then only there is profit in the business otherwise there is the occurrence of the loss. So it is important that sales and cost is properly analyzed as it would ultimately affect the profits of the business.

Forecasting is the important concept that needs proper consideration. As business works in the dynamic environment so it is important that all the aspects are properly analyzed for the future purpose so with the forecasting few issues are analyzed and measures are planned in the case of the needs (Runcie, et. al 2012).

From,
The Management consultant

QWM is starting a new project so the activities for completion of that project are as follows.

All the above mentioned activities are to be completed in a proper order to complete the project so a network diagram is to be prepared for displaying the activities which are to be performed for completing the project (Selart, et. al 2011). 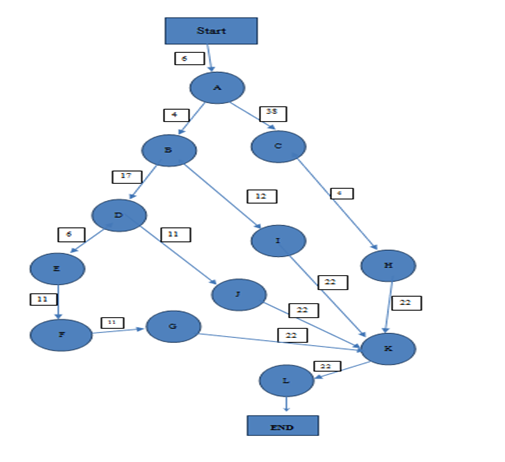 Critical path for this project is

So the critical path for this project is 99 days which represents the longest duration for completion of this project (Selart, et. al 2011).

It is the construction company who has planned to invest in the new project that would cost a significant cost for the company. So two project plan are available and the calculation of the NPV and IRR are done so that a perfect project be implemented in the company.

From the calculation that is done in the spreadsheet

Report to the board of directors

The Board of directors,
Construction Company,

Business decision must be taken in an effective and efficient manner. All the aspects of the business strategy are decided by the decisions taken in that regards. So it becomes important that decision be taken by using the correct tools so that no problems may arise in future. If the business conducts proper analysis and evaluations then only it may run in the long run so all the tools are used effectively and efficiently. Research, NPV, IRR and other statistical tools is used in an effective manner.