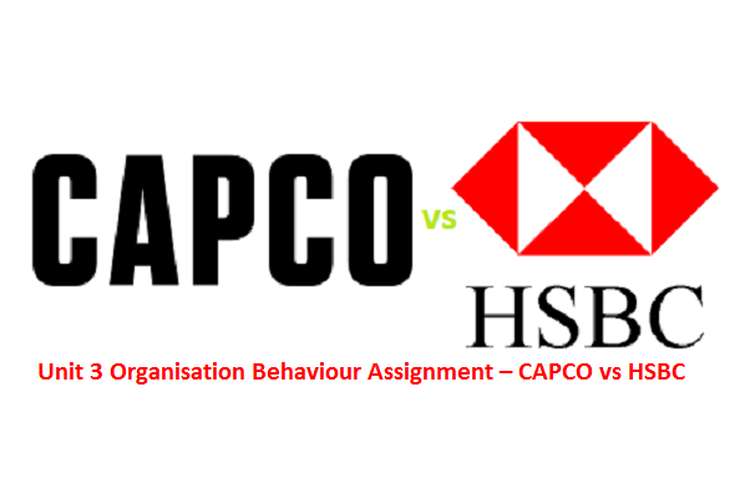 This assignment is made by taking into consideration one of the significant matters which is known as organisational behaviour. The scope of organisational behaviour is enormous and it is essential for considering it because of the direct connection with efficiency. This unit 3 organisation behaviour assignment CAPCO vs HSBC showcases two organisations which are CAPCO as well as HSBC. There is significance in having theories of motivation in the company for the maximisation of efficiency as well as for establishing a working environment that is considered positive. Other than that, the significance of the groups in the company is also considered to be significant for the actualisation of organisational objectives. In that respect, the issues that inhibit the efficient teamwork will be explained in the assignment.

There also exists similarity amongst the two companies regarding the structure of the organisation that concentrates on the structure of work. The two organisations want to avoid the conflicting situations as well as create a healthy organisational environment. (Harrell, 2011). Organisational culture is considered to be the values that are followed by the company in respect of their process of work for establishing an effective environment for work. There can also occur difference in culture in respect of its nature that can be distinguished in the below mentioned manner,

Organisational culture in respect of a company is mainly created for the setting of an organisational discipline. The objective is towards increasing the efficiency while providing superior value in respect of the clients. (Ramaswamy, 2013) Therefore, all the companies are trying to set the cultural aspect that will be empowering the staffs as well as assist in the actualisation of the common target.

There exists a direct relationship in respect of the structural aspect as well as cultural aspect of CAPCO regarding the performances of the staffs and determination of that can be done from the below mentioned examinations,

Therefore, from the above discussion, there is clarity that the structure as well as culture is having a wider impact regarding the performances of the staffs. A staff will be providing their optimum performances when they get motivated and the environment will be supporting them. (Fox, 2010) Therefore, the two variables will be playing a significant task regarding the aspects of motivation as well as coordination that will assist the staffs in getting a route-map regarding the activities related to work.

Individual behaviour is considered to be the response provided by an individual that depends on a particular situation. There exists the issues that impacts the behavioural aspect of the individual working at CAPCO in the below mentioned manner,

Therefore, it can be observed that there exist various issues that can positively or negatively impact the behavioural trait of a person. There should be the analysis of the various issues as well as formulation of specific strategic aspects that will assist in overcoming the negative aspects as well as do the enhancement of the organisational effectiveness.

Leadership is considered to be the power that a person possesses for influencing others. From a leader, there can take place the expectation of enhanced motivation as well as enthusiasm that will be attracting others for following the person. There is the existence of various styles of leadership that an organisation follows for involving the staffs in the process for work that will be ensuring increased organisational efficiency. For the determination of the efficiency, there is a requirement for the comparison of the various styles of leadership that the two organisations, CAPCO as well as HSBC are following. (Harrell, 2011)

There is a huge relevance of the organizational theories in respect of the management practices. The theories are providing directives in regard to the practices that are required to be pursued to have increased organisational efficiency. When the theories such as scientific management and human relations management  theory are put into practice, there will occur increased efficiency. (Harrell, 2011) The relationship between the organisational theories and the management practices can be associated in the following manner,

The various approaches that are undertaken by the management at CAPCO and HSBC are as follows,

Leaders are considered as the individuals who are capable in influencing other individuals with their experience, knowledge, skill as well as styles of approach. The leaders have the responsibility for increasing the motivation of the organisational staffs. The organisational goals do the determination of the styles of leadership that should be followed for the establishment of a positive working environment in the place of work. (Jenkins, 2011) For example, certain changing scenarios in CAPCO such as staff rotation from team to another team. In this changing perspective, the styles of leadership that are having varied influences can be evaluated through the below mentioned manner,

Motivation assists in driving the staffs for giving effective organisational performances. The staffs having high motivation will provide more efficient performances in comparison to the staffs that are de-motivated. Therefore, it is important in respect of the company for inculcating the motivational aspect in the working environment. (Jenkins, 2011) Motivation application can be understood from the  motivational theories  that are mentioned as under,

Maslow’s Theory - According to Maslow’s Theory, a human being’s needs are segmented in five parts. The needs keep developing with their fulfilment. The 5 kinds of needs of an individual in respect of an organisation can be explained as under,

Herzberg Theory: Motivation is categorised by Herzberg in two segments viz. hygiene factor as well as motivation factor. In respect of satisfaction as well as dissatisfaction, the management stresses on these two scenarios in the below mentioned table,

Therefore, it can be observed that the theories of motivation are associated with the practices of management for delivering the motivation within the staffs to get more efficiency in their ability to perform.

A manager’s role in a company is very much significant in respect of the businesses’ viewpoint. There is the responsibility of the manager in making the things done in the company. In respect of this responsibility, motivation is the sole need in making the things completed. For instance, when there occurs planning to change in respect of a company in certain process of work then it is the manager who will be implementing the changing aspects through the motivation of the staffs that are working for him. In that respect, there can occur the application of the theories of motivation. For instance, issues that lead to dissatisfaction according to Herzberg’s theory will assist the managers in understanding the reason behind getting dissatisfied and requirements for overcoming the situation through the consideration of the measures. It is quite common that the companies did not succeed in the achieving the targets because of the performing abilities of the staffs and in respect of that there is a need for a manager in understanding the motivational theories and applying it to the circumstance to develop the efficiency. It is the motivational aspect that will do the boosting of the performances of the staffs that will assist the company for the actualisation of the target. (Schein, 2012) Along with having a direct relationship with the achievement of target, motivation also impacts the working environment at the place of work. When every staff is involved by the manager in the process of decision making then there is a very less possibility for the staffs to give ineffective performances. The endeavour will encourage the staffs in giving their optimum performances as well as assist in creating a positive environment for work in the place of work. (Fox, 2010)

According to the motivational theory of Maslow’s Hierarchy, there exist five requirements that are actualised by the human beings. For instance, to support the basic requirements of a person can be associated with the scope for employment provided by the companies such as CAPCO. Then, to support the security requirements are realized by the CAPCO by offering health insurance, welfare schemes for the staffs, flexible policy and so on. (Schein, 2012) After that, there occurs the fulfilment of the psychological needs by CAPCO through the formation of productive team of consultants and also through the maintenance of a positive working organisational environment. Then, the staffs are supported by CAPCO through the fulfilment of their self-esteem needs by offering rewards as well as recognitions and also promoting the consultants to the hierarchy of senior consultants and so on. Last but not the least, there is the fulfilment of the self-actualisation needs by offering demanding tasks or work to the consultants to manage the quality clients. (Boone, 2015). Therefore, it can be said that, Maslow’s Need theory can be associated with the workplace to increase the motivational aspect that will encourage the staffs as well as participate in the organisational business which will be enhancing the business to gain profit.

4.1 Explain the nature of groups and group behaviour within CAPCO or you chosen organisation.

The nature of group in CAPCO are mentioned as under,

The issues that might do the promotion or inhibition for developing efficient teamwork in CAPCO are mentioned as under,

Technology is considered to be the technique that is utilised through the involvement of computers, machineries or different electronic appliances. Technology will assist in providing effective functioning of the team. Not just in the functioning of the team but will also assist the company in reducing the functional cost and simultaneously will be bringing effectiveness in the process of work as well.

The merits of CAPCO’s team functioning can be evaluated as follows,

The de-merits of CAPCO’s team functioning can be evaluated as follows,