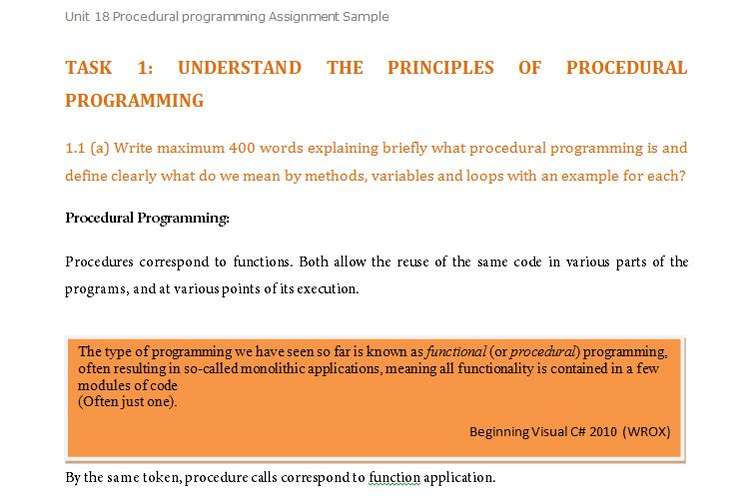 1.1 (a) Write maximum 400 words explaining briefly what procedural programming is and define clearly what do we mean by methods, variables and loops with an example for each?

Procedures correspond to functions. Both allow the reuse of the same code in various parts of the programs, and at various points of its execution.

Function is a subprogram which is used to enclose set of code which provides the ease of code reusability. Functions can be used in a place where calculations are to be performed or any logic is combined with the solution. It helps when you designs the logic once and uses it wherever you require. Functions can also take arguments and return values according to the logic but functions can only return one value whereas they can take as many as the require.

Here square() function receives a number as argument and returns square of it.

Benefits of Procedural Programming:
There are many benefits of procedural programming these are the following:

It helps us to divide the large task into multiple simple tasks that performs specific task.
In modular programming every task is defined as separate and independent task so our application can be changed any without changing other modules.
Benefits offered by modular programming to the programmers:

Code Readability:
The term code readability is used to denote the grace of code’s readability which includes following facts:

Code Usability:
The main concept of code reusability is design once and use wherever and whenever required by just calling the function using its function name. It helps to save the programmers time where method designed once is not redesigned again and used several times wherever required.

Maintenance:
Each task is divided into subtasks or separate functions and these subtasks are easy to maintain and trace. When any bug occurs then it can be easily traced and debug on that separate subtask only rather the manipulating the function of the whole task. This is very useful as it is easy in it tracing and debugging the bugs.

Debugging is Easy:
As stated above the function as a whole is divided into subprograms and these subprograms perform specific tasks. In these specific subtasks if anything goes irrespective to the program and program goes wrong then we can easily trace that which subprogram is going out of its bounds and after finding the task we can easily debug it without even touching the other code.

2.1 Explain briefly the benefits of pseudo code and flowcharts, then develop an Algorithm using pseudo code (‘Divide’ the Algorithm into simple action steps) to show how you design the key functions/methods created in your program.

Pseudo codes are simple texts representing logic of the program and it is easily understandable by the people does not belong to programming background. This is an efficient way to create basic logic used to solve the problem.
Following are the benefits of the Pseudo Code:

Flow charts are diagrammatic representation of a pseudo codes. They are widely used in software development. Basically flow charts are used to represent any process in any business. So it is an easy approach for overview of the approach that can be used to solve the problem.
Benefits: 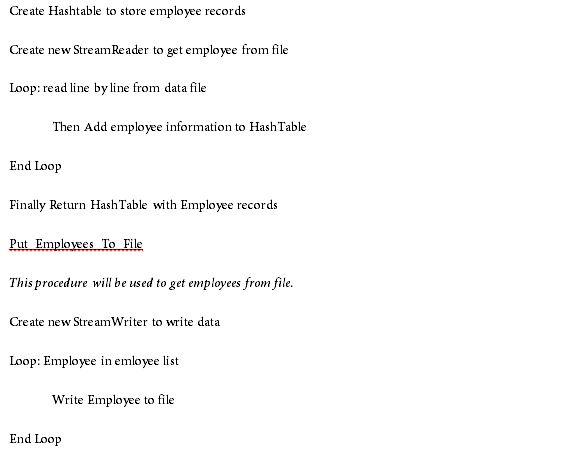 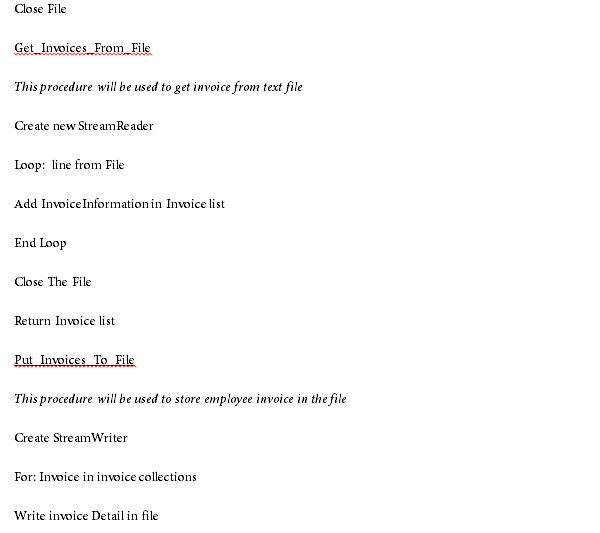 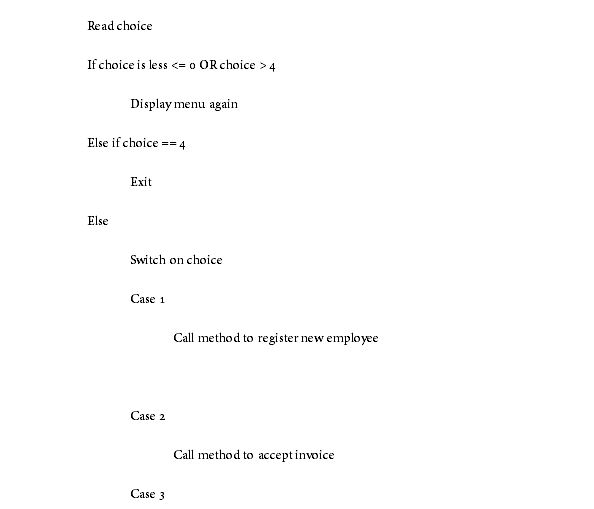 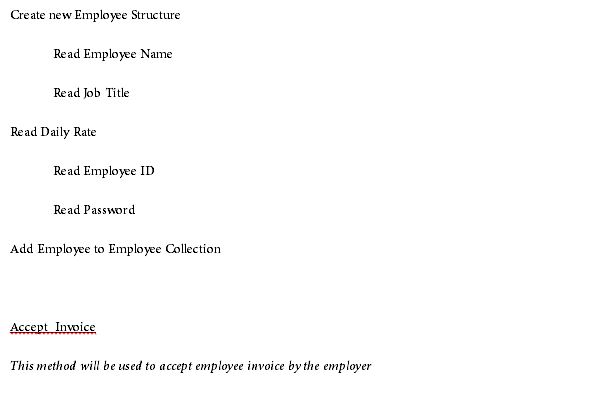 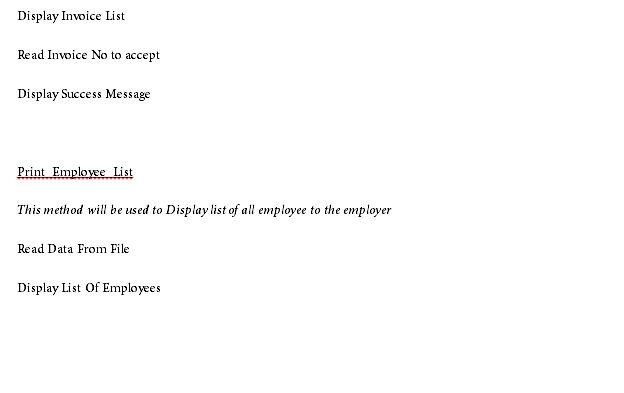 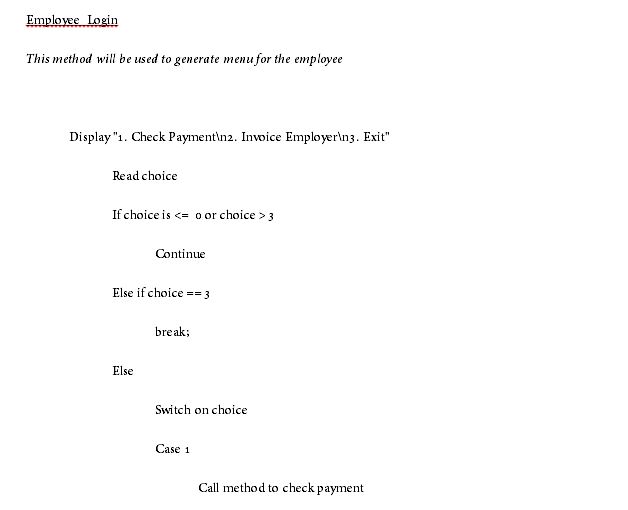 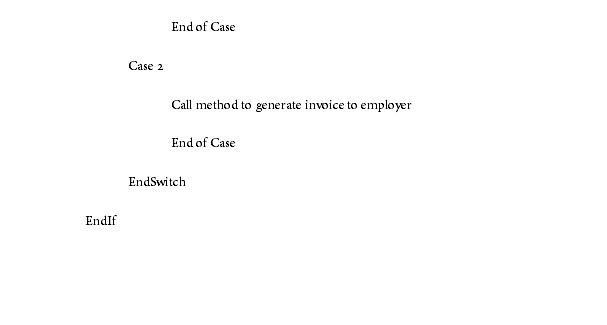 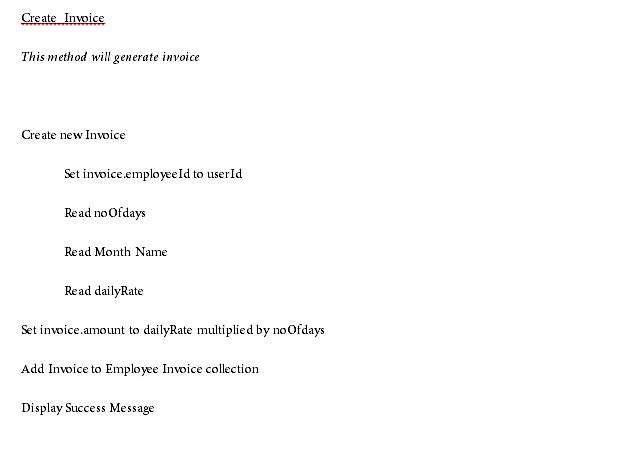 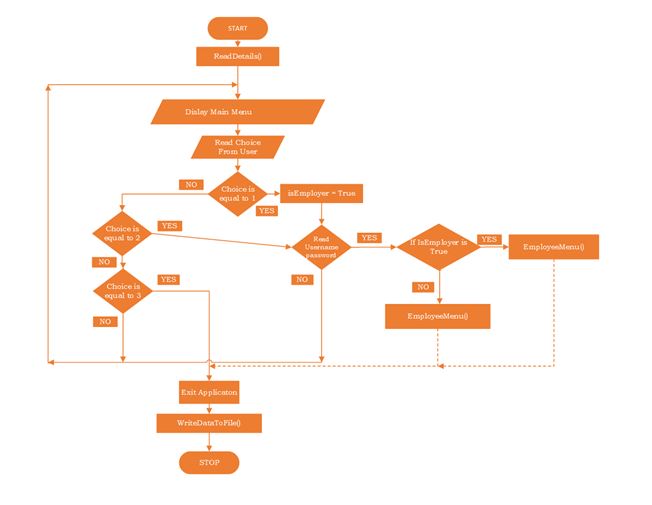 2.2 Develop a basic architecture of your system showing the different components.

I have defined two structures to make it easy to represent employee and invoice information.

The data related to employee and invoice will be stored in plain text files as the assignment required and the each record will be in a single line, in which each value will be separated by semicolon.

Employee information file will have the following structure

The information will be stored in file in one record per line, and the values will be in separated by semicolon, following will be the format
{employee_ID};{employee_password};{employee_name};{employee_job_title};{employee_rate}

Invoice information file will have the following structure

The information will be stored in file in one record per line, and the values will be in separated by semicolon, following will be the format
{invoice_ID};{ invoice_month};{invoice_amount};{ invoice_is_accepted}

3.1 You are required to implement the developed Algorithm for a given scenario and drawn Flowchart (in task 2) into a C# Program Code using MS Visual Studio Express 2010/2012.

I have developed Basic Accounting System using Microsoft Visual Studio 2012. I have implemented the overall functionality of the application separated modules, which makes the debugging easy and increases the reuse of code and increased the readability of the code.

Procedure used to present menu for employer user
Employer_Login ()  It is used to present menu if the employer logged in. It displays task that can be performed by Employer. The Employer can do the following task
Register New Employee: Employee can create a new employee.
Confirm the monthly payment: The Employer can confirm the monthly payment of an Employee.
List all employee id and name: The Employee can see the list of all Employees. 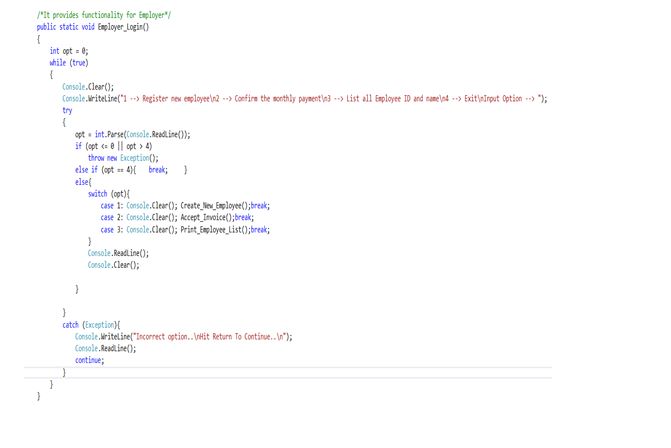 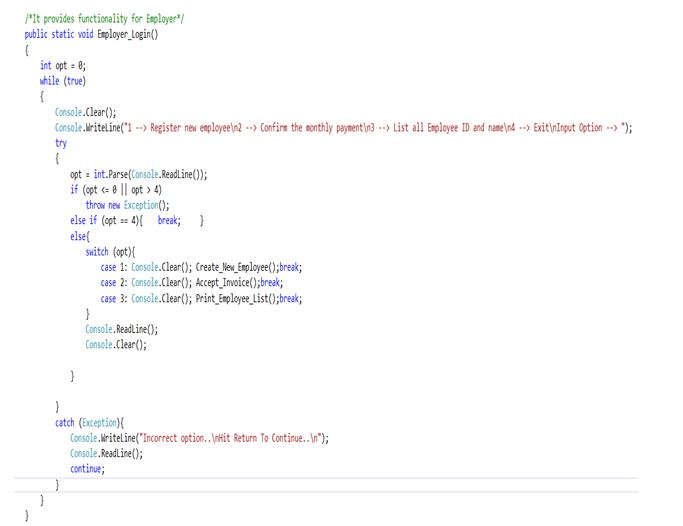 3.2 You are supposed to learn the programming in this unit like array, methods, output to text files as built-in I/O Standard Input Output Library and the Functions used to the program User to Input the selected Menu.

All the above specified programming skills are well learnt like arrays, file reading/writing, methods, getting user inputs and use I/O library.
Arrays are used to store similar type of data sequentially. This data can be accessed randomly by using its index. Index in array starts with 0 to n-1 where n is the number of objects array can store.
Methods or functions are used to divide the project into separate small parts which as a whole perform the task of the given project.
File I/O Input Output standard libraries are used to manipulate the data in the files. Here manipulating contains all the functions that can be performed on the file are performed using these libraries.

Detail and the approaches that are used to develop the application are described below:
It is a console based application in which inputs are been fed by using I/O methods of .net environment. The user should first login into the application to use it. Different-Different menus are given for different-different users to use this application.
There are two classes which are used from System.IO to retrieve and save data to/from the text file in the comma separated format. These files are StreamWriter and StreamReader. To increase reusability and readability of code separate modules are divided for each function. This approach makes debugging easy.

4.1 Critically review and test your solution

Testing is a very crucial phase which is very important in the process of any software development. In testing many test cases are checked to be working correctly i.e. on some input the output of the program should be correct according to the user requirements. In this the assigned application and the developed application should have no difference. If this condition satisfies then the developed program is very well developed as well as tested.
Steps of testing:

I have checked the developed application and it is well tested and all validations are working perfect to get input by user. 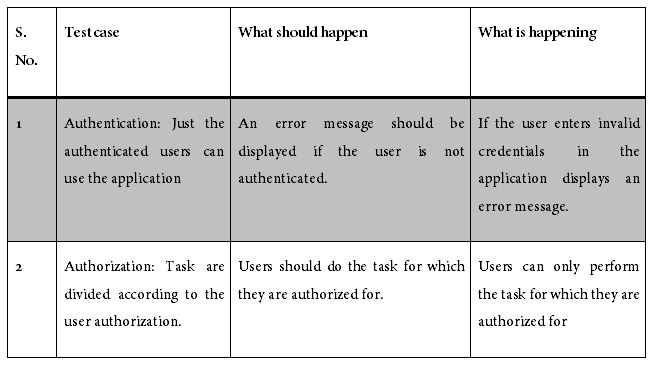 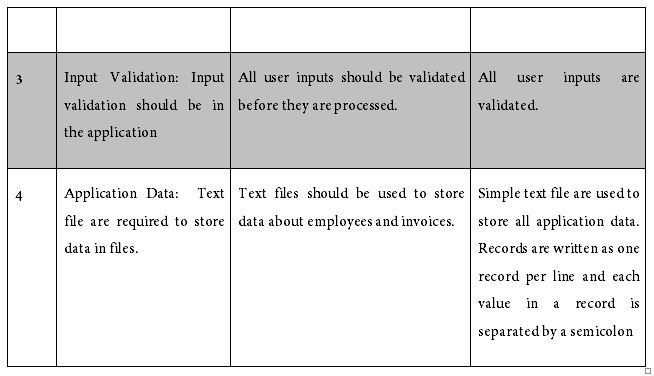 4.3 Evaluate independent feedback on your solution and make recommendations for improvements. 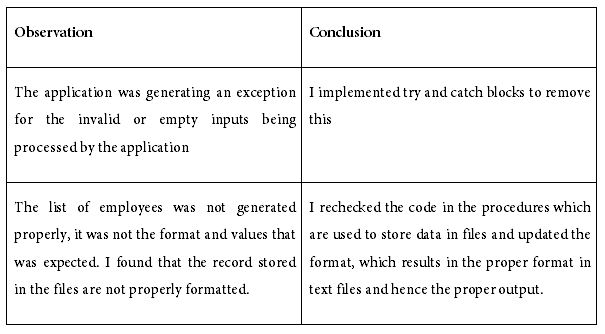 Post rectification of the above mentioned errors and some minor formatting issues, I did not find any errors in the application, and it is working well to fulfil the requirement specified to complete the assignment.

4.4 Create user documentation for the solution 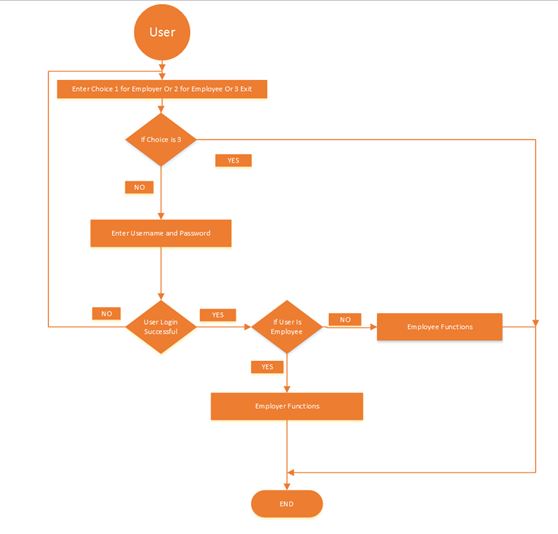 Main Screen of the application

4.5 Create technical documentation for the support and maintenance of your system

Following are the System Requirements For the application

The application is designed and developed with all care to fulfil the requirement, proper modules are developed to perform a task in the application.
System.IO.StreamReader and System.IO.StreamWriter classes are used to read and store information in the files. All application data is store in plain text file, one record per line and the values are separated by semicolon (;)
It is a console based menu driven application so no GUI will be available to application users and the all input and output can be done through console.