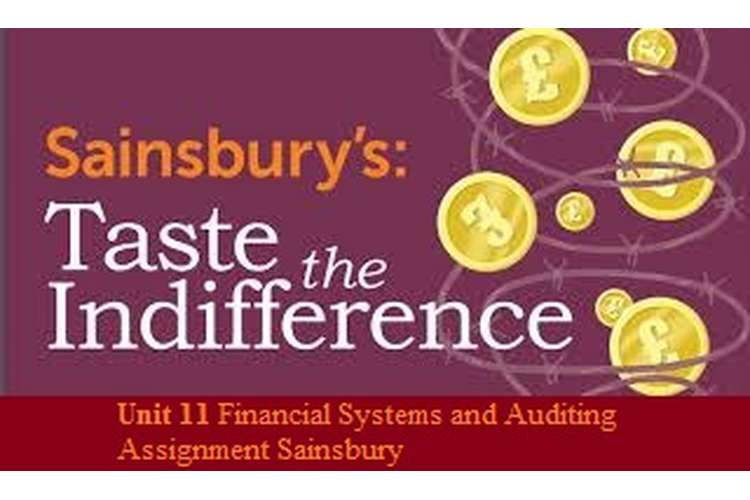 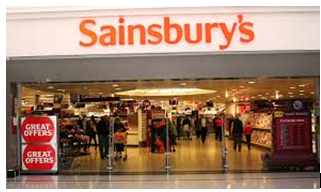 Sainsbury’s is the second largest company in the UK which is dealing in the chain of supermarkets with a share of 16.09% in UK supermarket sector. This company was founded in 1869 by John James Sainsbury in London. Sainsbury’s is helping its customers since 1969 and today its efforts have resulted into providing the best quality and better prices into food, clothing, home ware  etc (Sainsbury's, 2014). As per recent reports Sainsbury’s is the leading company which is dealing in food and non food products in several countries with its fast delivery networks. This company is engaged in providing best  food safety  and health services in UK along with this company is serving the society with integrity and it is making a positive difference in customer retailing market in UK. The main goal of this company is to be the first choice of the consumers for food products and they are providing better quality of product with better prices along with the best services. Sainsbury’s is getting success in completing its commitment of providing healthy, safe and fresh food and making efforts in making the life of its customers easier day by day. (Pollitt, D. 2010) 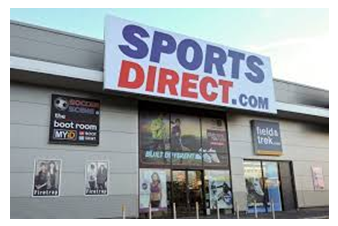 Sports Direct International Plc is the largest sports goods retailer in UK. This company has over 670 stores across the world and it owns a large number of brands who are dealing in sports goods. This company trades under a Brand SportsDirect.com with its fashion and sporting brands. This company was founded by Mike Ashley in 1982 so it is serving the society from its services since 1982 and providing the best sporting products till now. Currently this company operates around 420 sport stores in UK. The main aim of this company is to deliver sustainable growth to its stakeholders (Sainsbury's, 2014). This company is focusing on maximizing its efficiency and effectiveness to provide the best quality to its customers and to look for more opportunities for the betterment of the company. The company’s strategy is to acquire more brand and enhancement of its properties and to enhance the range of its products and to remain on the top in the list of sporting brand in UK (Sainsbury's, 2014).

Discussion with the team manager

Introduction of the report

Approach for interpretation and financial statements

Performance of the companies

Performance of both the companies will be analysed on the basis of the following ratios calculated for past three years:

Asset Turnover:Asset turnover ratio is and efficiency ratio which is used to calculate the company’s ability to generate sale from use of its assets. This ratio plays a vital role in every company because every company’s success is depending upon how efficiently it can use its assets so this ratio shows the level of use of assets in order to increase the sales of the company (James & Garrett, 2013).

Asset turnover ratio of Sainsbury’s is positive but has followed a declining trend. This shows that company is utilizing its assets to generate sale properly but still if we talk about the trend which company is following it is that it has a declining trend that assets turnover ratio is continuously decreasing from 2014 to 2016. This means company is increasing its sale from its assets but not at that level which it should have achieved. 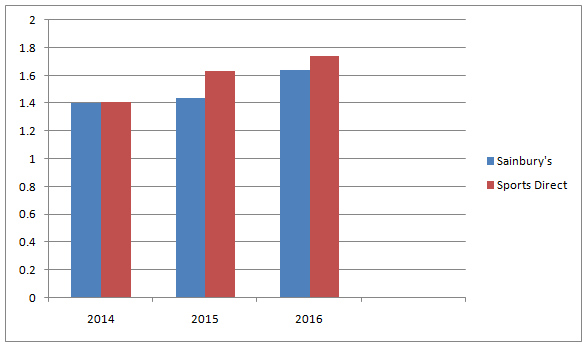 Inventory turnover:This efficiency ratio shows the efficiency of the company to manage its stock by comparison of time with its cost of goods sold. This ratio shows that how much stock is sold during a particular period. This ratio should have a high turn as it shows the relationship between cost of goods sold and sales as how much inventory do a company purchases and how much time the company takes to sell it.

Inventory turnover ratio of Sainsbury’ has not maintained any particular trend this shows that company is doing well in converting its purchases into sale but still company does not have a increasing trend it has a static trend from past years even though it is good but this also shows that company is not growing its sales from last years it is neither growing nor declining (Lam, 2010). 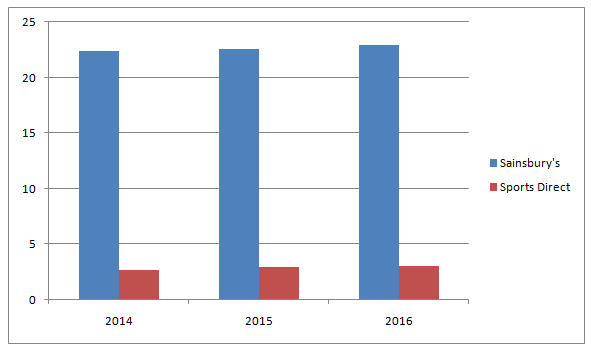 Profitability Ratios:Profitability ratios calculate the margin of Profit Company can earn from its operations. This ratio is very important for stakeholders to judge a company’s earnings. This ratio shows the return which company earns from its assets.

Profit margin ratio:This ratio is also known as return on sale or gross profit ratio. This ratio shows the amount of profit which can be earned from sales of the company. It is a measure to know how efficiently a company can convert its sales into profit. Companies are tending to achieve higher profit margin ratio to improve their profits.

Sainsbury’s has not followed any particular trend in profit margin ratio as in 2015 the company suffered loss in 2015 and in 2014 and 2015 it has a positive profit margin but still the ratio is not very much high as the company is leading company n customer retailing market in UK it should earn more profit margin (Connolly, Hyndman & McConville, 2013). 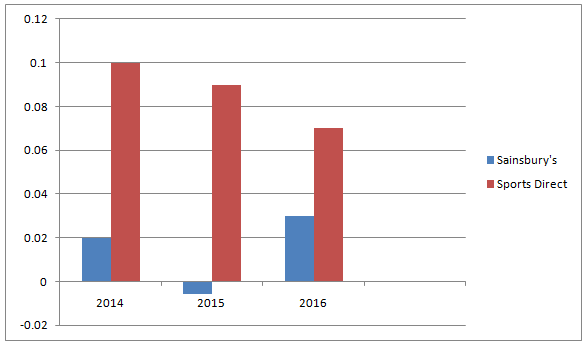 There is no proper trend for return on equity over past years in Sainsbury’s. Over three last year's company has earned highest return on equity in 2014. Even though company is earning a positive return but still there is not any increasing trend in the company.

Sports Direct has a declining trend on return on equity. This ratio is continuously decreasing over the past years this shows that company is not earning many profits on shareholder’s investments and even the company is not efficiently using the shareholders money to earn profits even after this declining trend Sports Direct is having higher returns on equity than Sainsbury’s (Tomczak, 2014).

Liquidity Ratios:Liquidity ratios are also known as solvency ratios these ratios are calculated with a view to evaluate the company’s ability to pay off its short term as well as long term liabilities. As the name suggests it shows the liquidity of the company that how easily company can convert its assets into cash. (Tomczak, S. 2014)

Sainsbury’s had not maintained any proper trend for its quick ratio even the ratios are very low this means company is not successful enough to pay its liabilities from quick assets.

Sports Direct is following a proper trend in maintain its quick ratio over past three years and it is continuously increasing since 2014 till now and in 2016 the ratio is good enough that shows that company is capable enough to meet its current liabilities from quick assets only (Xia, Fei & Liu, 2015).

Current ratio of Sports Direct has maintained an increasing trend over the past years and in the year 2016 the current ratio of the company is 2.43 which is very good this shows that company is increasing its ability to convert its current assets into cash (Ongore, Ogutu & Bosire, 2015).

Solvency Ratios:Solvency ratios defines how solvent is the company to pay off its debts. These ratios measure a sustainable level for the company to balance with its debts and assets. (Xia, et. al, 2015)

Sainsbury’s has maintained a higher debt equity ratio over past three years which means that company is financed more with its creditor’s financing rather than funds of its shareholders. This gives a negative impact about the company (Ezzi, Azouzi & Jarboui, 2016).

Sports Direct has maintained a low debt equity ratio over the past three years this shows that the company has always preferred for equity financing rather than debt financing which is good for the company.

Sainsbury’s has maintained a low equity ratio over past three years even there is no proper trend which is not favourable for the company.  This shows that company is not sustainable and it is risky to look for future loans in the company.

The equity ratio of Sports Direct is increasing since 2014 this shows that the company is following a good trend then Sainsbury’s as well as this is a indicator that company is sustainable and its is less risky to look for future loans in this company.

The price earnings ratio in Sainsbury’s has maintained an improper trend where this ratio was negative in 2015 and which has increased to positive in 2016 but still the value is very low which will be less attractive for the customers (Klara, Melinda & Dorina, 2012).

Sports Direct has maintained a good trend in 2014 but after it is decreasing till 2016 even after decreasing the price earnings ratio of Sports Direct is more than Sainsbury’s. The ratio was good enough in 2015 and 2014 and has decreased in 2016 but there is a scope that if company will grow the price earnings ratio of the company will also increase.

Dividend Yield: Dividend yield ratio calculates the amount of dividend to be given to its shareholders on the basis of market price of the share.

In the overall analysis on the basis of calculation of efficiency, solvency, profitability and other ratios Sports Direct is better company. The financial performance of both the companies is good as both the companies are leading companies which are dealing in customer retailing market in UK. Both the companies are doing well in their business but when it comes to the comparison of financial statements of both the companies Sports Direct had better financial performance and financial soundness in comparison to Sainsbury’s. Even though Sports Direct has not declared nay dividend over past three years but still other aspects of the balance sheets like current assets, quick assets cannot be ignored. Sports Direct has an increasing trend in profit margin ratio, quick ratio and current ratio this shows that the company is growing in its each and every field and company has maintained its good assets and liabilities has greater price earnings ratios than Sainsbury’s and even company is in sustainable position and it is risk free to invest in such a growing company. Sports Direct is financed more with equity finds rather than debt this elaborates the sound position of the company and the contribution of the investments of the owners in the company and today Sports Direct is the largest brand of UK which is dealing in sports and fashion brands. (Lim, el. at, 2015)