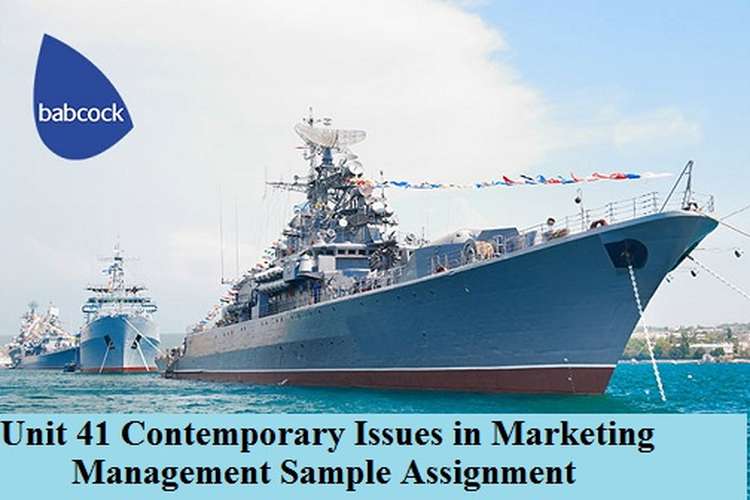 In case of solving problems, it is often found that multicultural teams are more effective. The reason for the same lies in the fact that people of the same culture often tend to think in herd or in the same direction. Thus in this regards people belonging to different cultures tend to think about the problem in different ways and from different angles and this tends to solve the problem faster and better. However, it is found that if a common ground for communication, problem solving and decision making is not established in a multicultural team then there are lot of problems that can emerge.  In the following pages the issues that are being faced by Babcock international would be discussed in detail. Babcock international was initially founded as Babcock and Wilcox ltd in 1891 and initially specialized in Industrial applications. The headquarters of the company are based in London and the company has witnessed rapid growth over the last 15 years. During this period a number of international businesses have been acquired by the company. The history of the company tells that there is a long period of excellence in engineering at its background. The company has been built on a base of ultra reliable delivery. Over the years there is a shift in the focus of the company from traditional engineering to one based in support services and has been able to achieve the leadership position in UK in terms of support services providing companies. The company employs about 26000 people and it follow high performance work practices so as to maintain high standards of service quality.
The following pages would discuss about the models of change and culture relevant to a particular national culture in relating to Babcock international limited. Another area that would be discussed is the type of communication in reference to the high performance working teams who form the base of Babcock international limited. 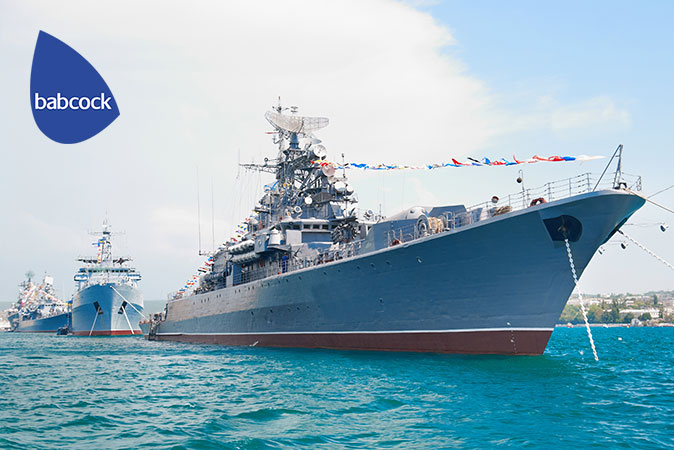 Organization citizenship is an area that has been often discussed in the literature in the recent years. Bolino, Hsiung, Harvey & LePine (2015) refer to organization citizenship behavior as discretionary actions of employees which result in improvement in organizational performance when collectively considered. The formal reward system practiced in the organizations often fails to recognize such behaviors of the employees. It is important to however note that although most of the scholars have pointed out about the positive impacts of OCB, there are some scholars who have raised questions about OCB and have pointed towards the negative impacts of OCB. In this regards, Bolino, Klotz, Turnley & Harvey (2013), in their review consider the negative effects of organization citizenship behavior and focuses on conditions in which more harm is done by organization citizenship behavior.
It is known that the national cultures have an impact on the individual values and thus in case of Babcock international the question that is more relevant to explore is where individual values have an impact on the organizational citizenship behavior exhibited by a person. In regards to this question it has been found by Arthaud-Day, Rode & Turnley (2012), that achievement has a direct impact on organization citizenship behavior directed towards the individual and benevolence has a direct impact on organizational citizenship behavior directed towards group. Self-direction has an impact on OCB directed towards the individual as well as the group. Wang, Hinrichs, Prieto & Howell (2013) tried to find the impact on national culture on the engagement of employees with 5 different dimensions of organizational culture and conducted their study with people from China and America. It was found that as compared to people of America, Chinese people showed higher levels of sportsmanship and courtesy. However, Americans showed high levels of civic virtue as compared to the Chinese. It is important to note that as per Hofstede, in China the power distance is high. Thus it has been observed by the researchers that the perception of support that employees received from their supervisors had an impact on their relationship with all the 5 dimensions of OCB (Wang, Hinrichs, Prieto & Howell, 2013).
The managers of Babcock international Limited often assume that there is little difference of significance between the people who belong to national cultures that are similarly grouped. In this regards an important research that should be referred to is one that was done by Liñán & Fernandez-Serrano (2014) in which the researchers have examined the effect of different national cultures in countries across European Union on the development of economy and entrepreneurship. This research project is important to consider as the countries in European Union can be considered to have a similar national culture and thus fall under the same cultural group with little difference of consideration. It is found by the researchers in the regards that a complex but significant role is played by the geographic elements of a country on the research dimensions. The researchers point to certain elements that are common across all the countries in Europe. It is however, pointed to by the researchers that there are four very well defined cultural groups within the Europe (Liñán & Fernandez-Serrano, 2014).
Another question that is important to address in this regards and especially in relation to Babcock international limited is whether national culture to which a person belongs has an impact on commitment of the individual to organizational change. According to Aldulaimi & Sailan (2013), dimensions like power-distance. Individualism-Collectivism, etc. has an impact on the readiness of a person to organizational change and his commitment in this regards (Aldulaimi & Sailan, 2012; Aldulaimi & Sailan, 2013, Michalak, 2010; Nazarian, A., Irani & Ali, 2013).  There is an also a relation between the dimensions of attitudes related to business ethics and the different cultural dimensions of Hofstede (Okpara, 2014).
It has been that Babcock International Limited practices High Performance Work Practices in its workforce so as to achieve high quality of service delivery. Karatepe (2013) defines high performance work practices as the performance enhancing activities of the human resource (Karatepe, 2013). Some human resource practices in this regards that are characterized as HPWP are training, work-life balance, empowerment, reward, employment security, etc (Sutton, Evans, Davies & Lawson, 2016). It has been also found by the researchers that the employees working at the front-line positions in the companies and exhibiting HPWPs and recipients of social support at the workplace are likely to show lesser intentions of leaving the particular organizations (Karatepe, 2013). High performance work practices are found to result in the employees exhibiting higher levels of customer service and performance at the jobs (Karatepe, 2013a).
It has been established by the researchers in this regards hat communication is an important factor for sustaining a HPWT. In case of any organization communication is an important thing. However, the importance of communication is severely felt in case of a HPWT. One of the important factors that are important to have in case of a HPWT is open communication. In case of such teams there is an emphasis on coaching rather than directing. It is also important to point out that in case of such teams there is an importance that is given to the ability of the team address problems in an open and direct manner (Gittell, Seidner & Wimbush, 2010).
Mihail, Mac Links & Sarvanidis (2013), state that in case of high performance working teams the type of communication that is most important to have is open lines of communication.  Armstrong, Flood, Guthrie, Liu, MacCurtain & Mkamwa (2010), state that in case of such team open lines of communication results in ensuring motivation of the employees, cooperation amongst team members and maintaining the interest of the team. It has to be ensured that there is a free flow of information in such teams and to ensure that there is no such thing that is beyond the point of discussion in case of such teams. The interaction of the members of such a team and the rest of the organization is respectful in nature.

It is the belief of business managers in the London office of Babcock international that countries like England, USA and Canada have similar culture as they belong to Anglo-Saxon group. Thus there is a belief that there is less difference in business practices among these three countries.  However, the following pages analyze these three countries on the dimensions of Hofstede and finds that there are subtle differences between them (Minkov, Blagoev & Hofstede, 2012). 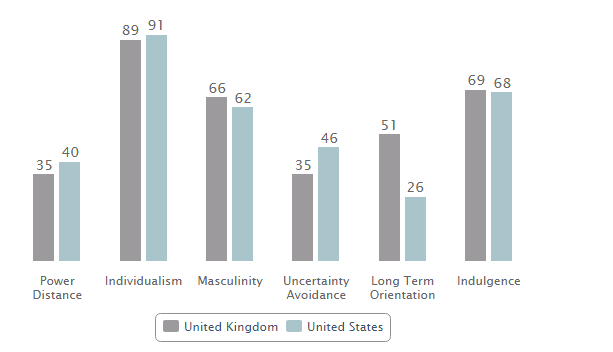 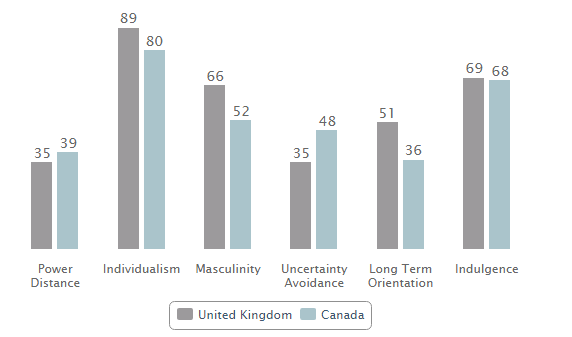 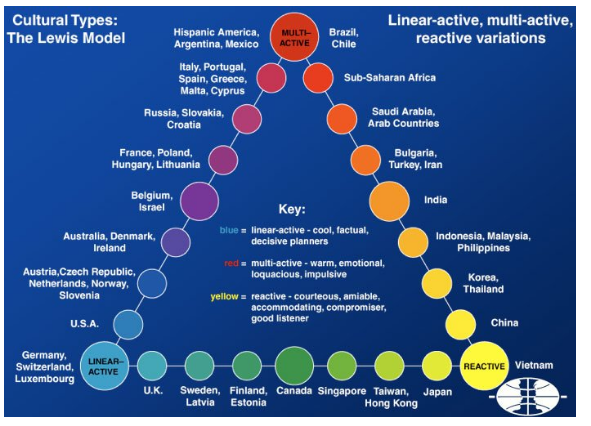 Applying this cultural model one can see that there are clear difference between the countries US, UK and Canada. It is seen that the culture of USA is more linear active in nature as compared to UK. The difference between the USA and UK culture is that there are few traits of multi active culture in people of US and as compared to US the people of UK show some traits of reactive culture. In case of Canada on the other hand there is a proper mix of linear active and reactive elements of culture.
Thus, it is required while keeping in mind these differences between cultures, managers in London should not have similar business practices in case of these three countries just because they belong to the same cultural group. It is important to remember the differences that exist in between these cultural groups while dealing with them.
Another important model that is applied in case of Babcock is the capacity of the organization to change and this is measured through the use of wheel of organizational change. 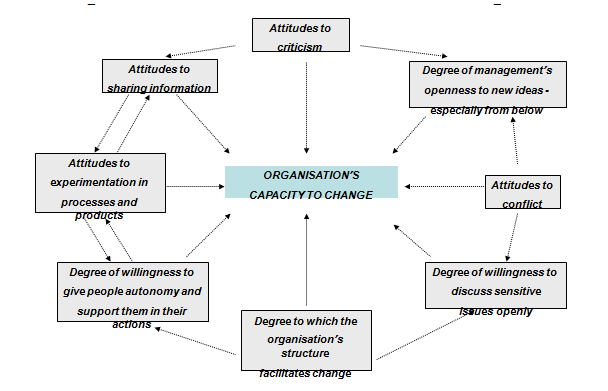 In order to measure the ability or the capability of Babcock to change as an organization, the factors that are presented in the above wheel needs to be considered (Schneider, Ehrhart & Macey, 2013). It is important to consider in this regards that the national culture to which an employee belongs has an important role in deciding whether the organizational would participate in change process (Volpone, Avery & McKAY, 2012; Truss, Alfes, Delbridge, Shantz & Soane, 2013).
Another change model that can be applied in this regards to facilitate the process of change in Babcock international is Lewin’s change model. There are three steps in the Lewin’s change model with respect to the change process and these are referred to as Unfreeze, change and refreeze. In order to facilitate change it is first important to understand those people in the organization who are in favor of changer and those who are against change. First the people who are against change would be greater in number and thus the process of unfreeze has to begin. In this process the aim of the marketing management would be to use the people who are for the change process to persuade those who are against the change and make them in favor of change. After this process has been successfully completed and there are greater people in favor of change as compared to those who are against change the process of change can begin. After the change has been completed a sense of stability has to be brought in and this is referred to as refreeze.

It has been noted through discussion in the above pages that there was a gross overlook by the managers as Babcock International over the importance of National cultures in ensuring the engagement of the employees with OCB. Another issue that was overlooked was the importance and existence of different business practices in countries having similar national cultures. However, it is found that the company follows high performance work practices and this has resulted in higher job performance and high level of motivation among the employees.