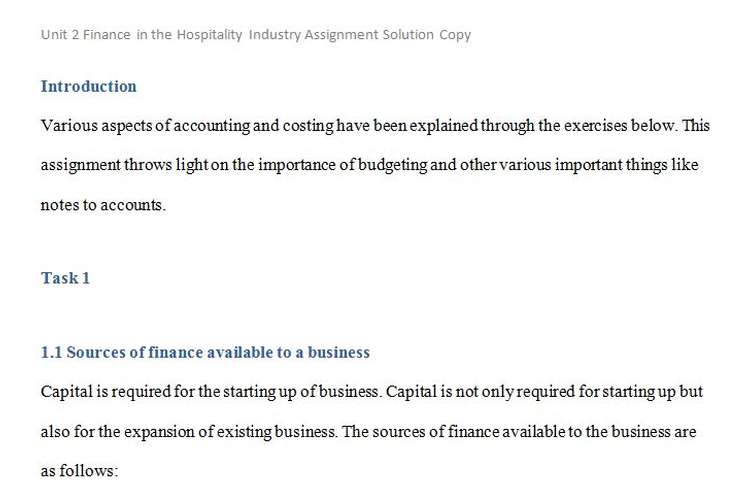 Various aspects of accounting and costing have been explained through the exercises below. This assignment throws light on the importance of budgeting and other various important things like notes to accounts.

1.1 Sources of finance available to a business

Debt Funds: The organization can opt for debt funds. The interest paid on such funds is an allowable tax expense. This implies that the interest paid on such funds would be tax deductible. However this would not be applicable for the government as the government is not required to pay taxes. (Bhowmik and Saha, 2013, pp. 61--71)
Taxes Collected: The best source of finance for the government would be to make use of tax payer’s money. This is the money that has been collected as taxes from the citizens of the country. The government is not required to pay anything on this money as this is the property of the state.
Shares/Equity: The government can incorporate a company for this project and raise capital by issuing stocks and shares. Stocks and shares are only repaid at the time of winding up of the organization. The organization issuing the shares has to pay dividends on such shares. Generally such dividends are paid on the face value of the shares. Generally the cost of equity is the highest as these are paid the last.
From the above discussion it can be concluded that the government can make use of the tax payer’s money to fund the project under consideration.

1.2 Possible ways of generating income from the theme park

Memorandum Report:
Theme parks have a huge operating cost and require a lot of money to keep them running. In the recessionary phase of 2006-2010 almost all the theme parks across the world felt the pinch. There are generally various avenues of generating revenue in theme parks. There are water parks, joy rides, refreshment joints and picnic grounds.

Sources of Revenue:
The various such sources have been described below:
Joy Rides: This is the biggest source of revenue for theme parks. Almost 80% of the revenue of the theme parks is generated by this source. However there is a huge cost associated with such rides. All the rides have to be made by world class engineers and have to be tested in a real time environment. These joy rides also have a huge operating cost associated with them.
Water Parks: These are also one of the most important sources of attraction.  According to a report by IBISWorld the average consumer spending on theme parks is expected to increase by 1.3% in the next five years from 2013. This really is a positive signal and the organization should capitalize on the same.
Picnic grounds: The Company can have some vacant land dedicated to building picnic spots. These spots attract old people who cannot enter into a joy ride or a water ride. The income of food joints is also related to such picnic spots.
Refreshment Joints:Refreshment joints also generate revenue for the theme parks. This idea can be implemented in two layers. The company can own its own food joints which would a direct source of revenue and can also rent places to world class restaurants for example the company can invite Dominos, Pizza Hut etc. The advantage of having world class food joints is that the company can use their popularity to generate revenue. (Bardswich and Flannery, 2006) 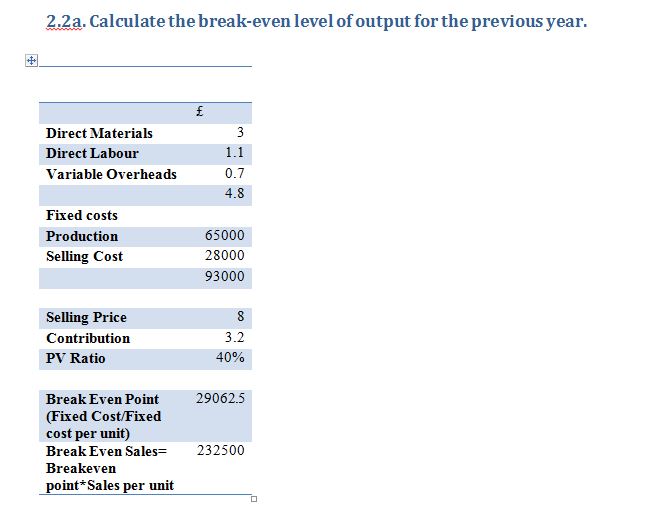 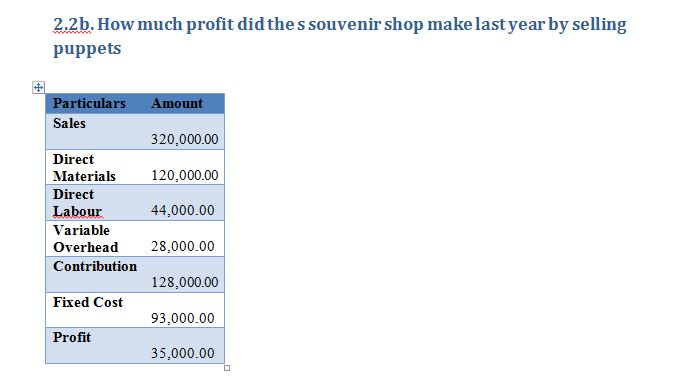 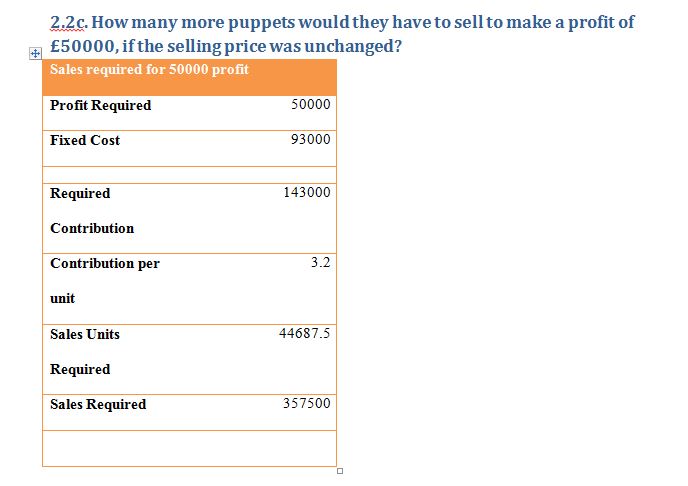 The limitations of using CVP analysis have been given below:

Rack rates:These are the full rates and the ones that are generally printed on the brochures. Activity and attraction operators don’t give discounts on such rates and generally charge them at full. However the accommodation providers have to generally consider these rates. During peak seasons these rates are charged in full but discounts have to be provided during the off seasons.
Seasonal Pricing:The pricing is designed in such a way so as to account for the busy, medium and off seasons. These prices never change as they have been designed keeping the entire year into account.
Last Minute Pricing:Last minute prices are generally the discounted prices. These prices are offered at the last minute to stimulate the demand.
Package Deals
Having package deals in place is a good idea and helps to avoid offering discounts. This also helps to stimulate demand as the consumer gets everything in one place. The hotel should try to strike deals with local businesses in order to boost the demand.
The organization should consider the above in setting the pricing strategy. The organization can opt for seasonal pricing as that would enable the organization to account for the full year’s profit. The organization should also try to strike deals with local businesses in order to boost demand.

2.4 Evaluate how the management of the souvenir shop would control their stock and cash flow.

An organization has to keep a track of the stock as that can affect the profitability of the business. The carrying cost and the ordering cost has to be taken into account. In order to keep a tab on the cash flow and inventory the organization will have to assess the following:

Apart from the suggestion made above the organization can also have a Just in Time purchasing system and can have good retail software. This would allow the organization to save on the carrying and other related costs and keep the cash flow intact.

3.1 The restaurant at Icon has requested a supplier to quote the price for the supply of caviar. The supplier has prepared the following standard cost information for a batch of caviar. 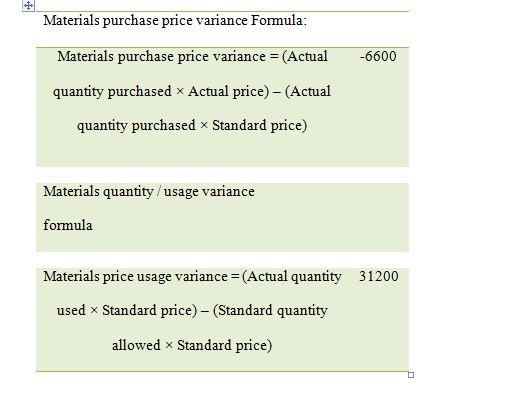 Explain the possible reasons why these variances may have occurred

The variances have occurred due to the following reasons:

3.2    You have been recently appointed as a financial consultant at the Icon restaurant to assist non-finance managers. At a staff meeting you have been asked to explain the following;

(a) The source and structure of the trial balance

(b) Discuss the budgetary control process and how this process helps management decision making at Icon Hotel.

(c) The usefulness of the business accounts and the significance of the notes to the accounts that may often be used in their annual accounting statements.

4.1 Calculate the following ratios and analyse the performance of the hotel for the last two years 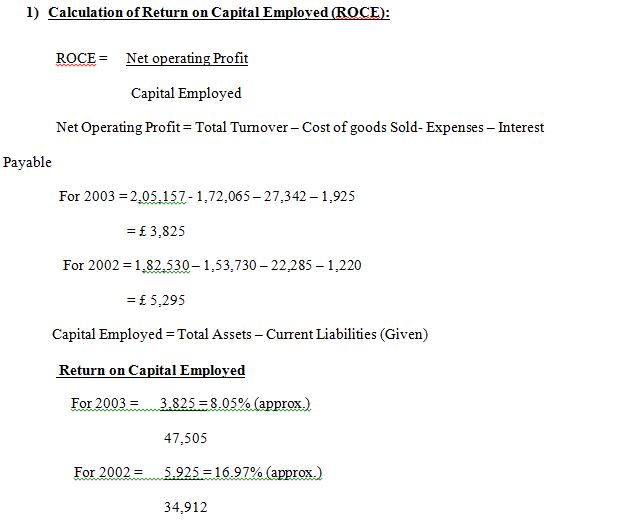 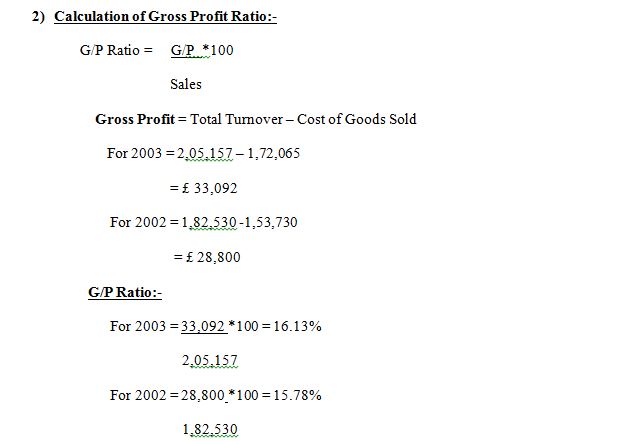 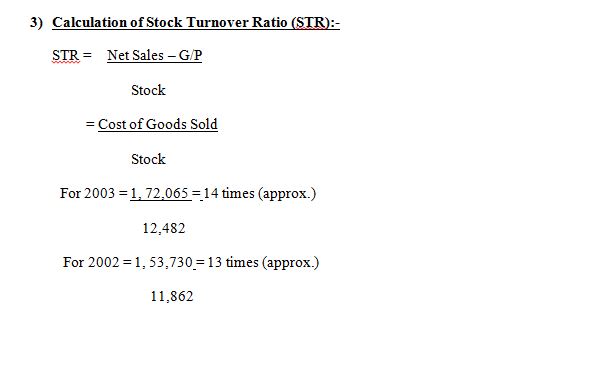 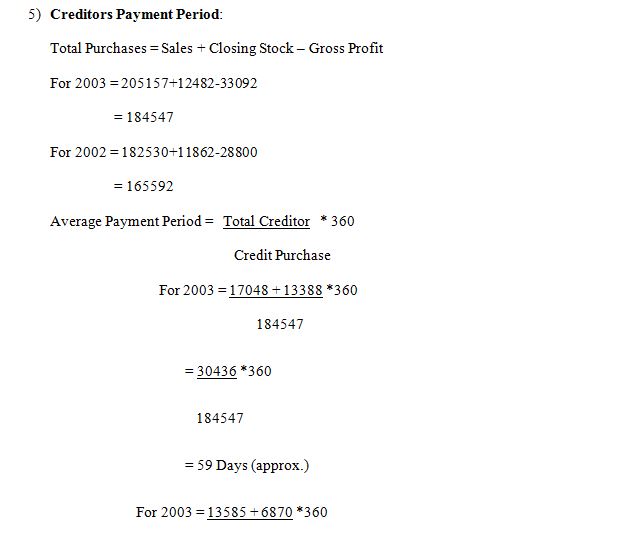 4.2 Suggest future management actions and strategies based on your analysis above

The gross profit margin has improved as compared to 2002. There is an improvement of 0.35% from the year 2002. The return on capital has reduced as compared to the year 2002. The ROCE has taken a hit of 7.11%. This has primarily happened because of increase in the expenses and interest payable. (Hansen & Palmer, 1997)
Other expenses and interest payable have increase disproportionately as compared to the increase in sales. The organization has issued fresh shares but the money received from such shares has been used to finance the assets of the organization. Though the liquidity ratio is sound but the liquidity position has reduced as compared to the year 2002. As far as the debtor’s payment period and creditor’s payment period is concerned the firm is just about ok. However the creditors unpaid for more than a year have increased. The top management should look into the reasons. If possible the top management should inquire into the reasons for the increase in the expense and interest payable ratio.

The exercises solved above help us in understanding the importance of notes to accounts and various other costing techniques. The application of the above mentioned costing techniques help the organization in keeping a track of the inventory level and price the product correctly.