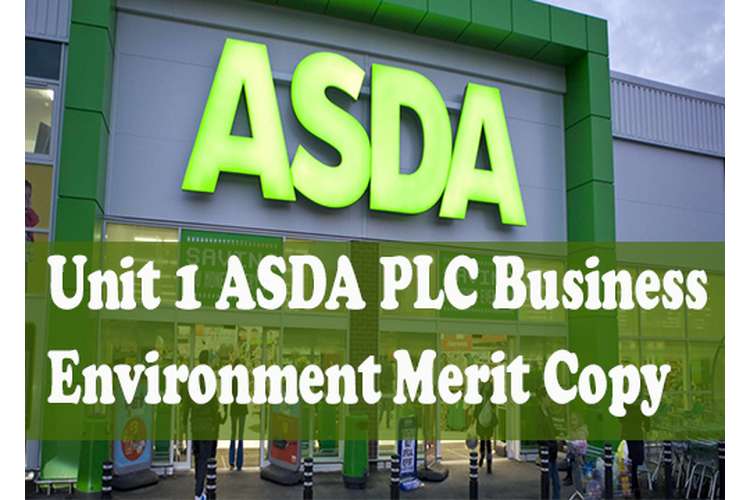 This Unit 1 ASDA PLC Business Environment Merit Copy About the company ASDA PLC. ASDA PLC is one the largest supermarket chain in the world. The UK based Retail Company which deals in grocery products and general merchandise was first started in 1949. The company has its headquarters in Yorkshire in London (Rancati, E). In terms of market share, ASDA is second largest company in the UK. The biggest change in the structure of the company came in the year 1999 when the company was acquired by Wal-Mart, the largest retail company in the world (Fernie, 2006). After the collaboration, ASDA took over Sainsbury in the year 2004; however, it is still behind Tesco which is the market leader in UK in retail sector. The company currently operates more than 560 stores across UK and employs around 175 thousand employees currently.

1. Describe the organization of your choice. You must explain the nature of the organization and its background, as well as the factors that have helped it to become successful in its sector. You will need to identify the criteria you have used for judging the organization’s success.

ASDA PLC is a public limited company which widely operates in UK. The different types of organization along with their core purpose are discussed below:

Factors that helped ASDA to become a successful company:

Firstly, the company realized the importance of being cost leader. Cost leadership strategy has been the key for success of ASDA in all these years. Its main competitors Tesco and Sainsbury operate globally and hence have wider range of marker. However, ASDA who majorly operates in UK keeps itself competitive ahead of its competitors because of low prices set by the company (Graff, 2006).
Secondly, ASDA PLC stores widen the product line in order to offer its customers with wide range products to choose from. The company earlier uses to deal only in retail sector, but slowly moved into gift items, travel and electronic products to meet the demand of customers.
Thirdly, the technological development of ASDA also plays an important role its success. Online business, acceptance of credit and debit cards at stores, use of RFID, self-checkout machines, etc. have facilitated the smooth transaction and easy and pleasant shopping experience for its customer. Promoting itself using loyalty card to existing customers also boost the sales of the company. Thus, technological developments have been a key for the success story of ASDA (Xie, 2013).

2. Discuss how SWOT and PESTLE framework can be utilized by the organization in its strategic decision making and how the use of these models can impact upon an organization’s long term success.

3. Analyse the evolution of the culture of your chosen organization in the context of its changing business environment and how an organization culture can influence its long term success.

Organization structure can be classified into two categorize i.e. Hierarchical structure or Flat organizations. Organizations with hierarchical type of organization structure have more levels of management and the decision making is in the hands of the top management. The transfer of information from lower level to higher level is slow as it has to be transferred from each level.
On the other hand, a Flat organization has lesser or no levels and everyone in the company is considered equal. The communication and flow of information is easy. However, decision making may not be spontaneous as it may be passes only after discussion with all the employees.
ASDA PLC is a huge organization and as a result the company adopts hierarchical structure and culture. However, from a strict adhocracy culture where the decision making was solely in the hands of the senior members and the major workforce was expected to carry out tasks assigned to them by higher management, the company has evolved and has started valuing its employees more and more.
Before, 2002, ASDA slogan was to be the best clothing and food superstore. However, the slogan was changed to be the best valued retailer in the country (Leech, 2007). Thus, the company started operating on four values which are (Leech, 2007):

•    To provide excellent service to its customers.
•    To always strive for excellence.
•    To respect all the colleagues and stakeholders.
•    To work with integrity.

ASDA PLC in the year 2009 did a survey on Customer known as “Customer Pledge” to understand what customer expects at work place. The company did the same survey on its employees to understand what the employees expect from the company and found four basic pledges from the employees which were: Fairness at workplace, everyone should be given equal opportunity, everyone should be respected within the organization and everyone should take pride while working for ASDA.
The autocratic leadership style which once was the main characteristics of ASDA slowly started to change to Participative leadership style. Though the company’s decision is still taken by the senior members, the company has started various employee forums where employees are free to give their suggestions and opinion about the company. Thus, it makes employees feel more committed towards the company. According to Hertzberg theory, ASDA realized the importance of motivational factors other than Hygiene Factors and therefore the management works closely with its subordinated and sometimes even help them to make them feel better (Guest, 2013). The managers also develop personal relations with the employees and listen and understand their personal problems and tries to sort them out which improves the efficiency of employees at ASDA. The Line managers in ASDA, in order to fulfil the employee pledges discussed above, do “Tiny Noticeable Things” to engage the employees. The leaders are polite in their behaviour, discuss the targets set for each individual and team with the team, help the employees at the store to make them understand better and make them feel comfortable.
Working on evolution of its culture, ASDA also understand the important of having diversified workforce. The company values diversity more than ethnicity and expects its employees to respect and work together as a team irrespective of caste, sex, religion, culture, etc. of the person. The managers are also expected to be fair and give equal opportunities to all employees in ASDA.
While merging with Wal-Mart, ASDA collaboration was smooth and was greeted by the employees. The company never faced opposition from its employees. The main reason was company’s transparent policy (Eisenstat, 2008). Though, the company decisions were taken by the Board members, the company kept its employees always aware of the structural changes as well as future strategy of the company. Thus, employees felt secure by the decision making of the company and did not panic and supported the company at the time of merger.
Thus, it can be seen that ASDA cultural change was smooth as the company was able to follow the Lewin model of change effectively. According to Lewin model of change, a company has to undergo three stages while undergoing a change. The three stages are: Unfreeze, transition and Freeze (Helms-Mills, 2008).
During unfreeze state, a company decides the benefits and disadvantages of going through a change and weigh them together. It can be seen that before ASDA’s merger with Wal-Mart the company was already behaving like a USA based company adopting the values of Wal-Mart. The next phase was the transition phase which went on smoothly because of the strong leadership qualities by the senior management of ASDA who make sure that the employees were kept aware about company’s changes and hence were supported by the employees. The last stage of freeze has also been carried out by ASDA strongly as the company has shown remarkable growth after its merger with Wal-Mart and the company continues to threaten Tesco to remove it from the number one position.
Thus, ASDA has experienced a huge change in its culture and approach. The company bureaucratic type of management style which kept staff members and managers in separate offices and flow of information was from top to bottom slowly changed as the company realized the importance of human resource in their company. The declining sales of ASDA made them realized that the company needs to make changes in its culture. Thus, the company following Hertzberg Motivational theory removed extra layers which were stopping them from flow of information and narrowed its structure to understand the organization better. The employees were given the opportunity to give their views and opinion. The company also started using technical means to communicate with each other. Email became one of the major means to communicate. ASDA realized the importance of managing its customer and therefore introduced automated tools for customer relationship management. Some key changes done by ASDA at organization level are:

Thus, all these changes helped ASDA to sustain in all these years. The company needs to be more open towards its employees in future so as to value them more and bring out the best from them.

Thus, it can be seen that ASDA PLC has wider opportunities to grow in European and Asian countries which will also help the company to overcome its Threats and Weaknesses. The company is highly dependent on UK market and hence needs to grow internationally to achieve higher benefits in the long run. The environmental factors also suggest that in order to achieve better returns it is essential that ASDA should look to grow globally. The organizational structure and culture of ASDA is also discussed and the changes that were brought were also discussed. The organizational changes brought in by ASDA have helped the company to sustain itself in the long run. The management style have changed a lot since the company was started facilitating communication system within the organization and adopting proper motivational theories into effect.