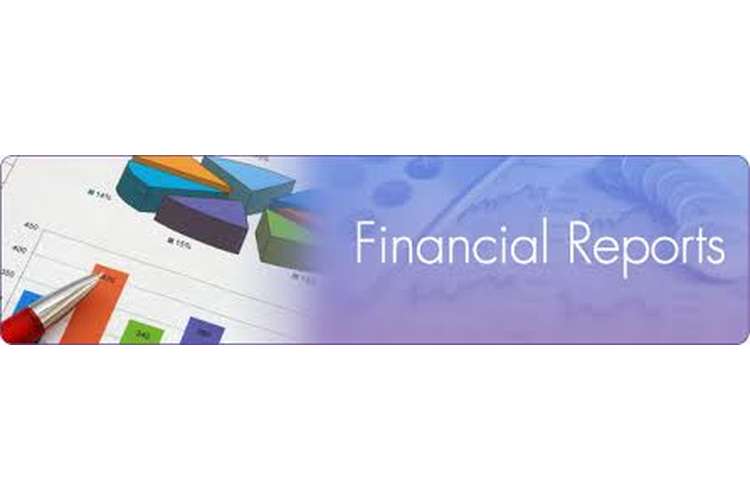 In this Accounting report, there will be an analysis of the Trial balance of Jack & Sons for the year ended 30th November, 2016, and with the aid of the Trial balance, comprehensive income Statement of Position will be prepared for the year 2016. This will give an in-depth analysis of the understanding of the items to be included in the Income statement and in the balance sheet. In the next part, we will be analysing the Annual Report of the two big giants in the Grocery industry i.e. TESCO and MORRISON. These are the two leading multinational groceries of the world. The thorough analysis of the Annual report along with the ratio analysis of the same will help in in-depth understanding of the actual working and finance performance of the Organizations. And a proper financial comparison of the two big organizations can be done with the thorough analysis of various financial and others important ratios. This report will help to increase our practical knowledge aspect regarding the Accounting theories. 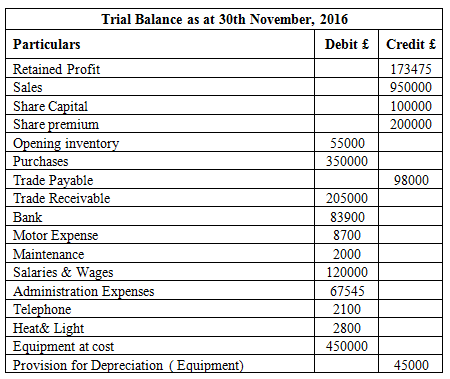 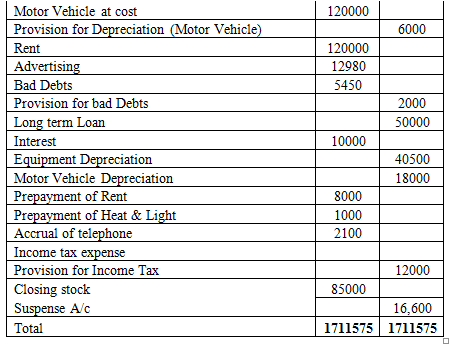 With the help of Jack & Sons trail balance and the mentioned adjustment entries, prepared an adjusted trial balance for the year ended November, 2016.

The following adjustments has been done in the Trial Balance-

b.) Statement of Comprehensive Income Statement

The Comprehensive Income statement includes all the expenses and revenues concerning in a particular period. It includes only those items which pertain to that year and the items which either is of the last year or for the next year are excluded from this statement.
In the following Income Statement, following adjustments were made
1) Cost of sales was calculated by using the following formula,
Opening stock+ Purchases- Closing stock= Cost of Sales
And further was included in the income statement.
2) All the operating expenses were added up than among which the following adjustment were done (Weetman, 2013)
£ 8000 from rent was less because this £ 8000 pertains to the next year and was included in the trial balance.
£ 1000 from Heat & Lighting was excluded as these also belong to the next year and was already included in the Heat & Lighting.
Accrual of Telephone expenses of £ 2100 belonged to this year but was included in the current year therefore this has been added in the income statement of the current year.
3) Provision of taxation which belonged to this year of £ 12000 were not included, therefore this was also provided in the current year and less from the current year’s profit.
4) Depreciation on the Motor vehicles and on Equipment was not provided, therefore provisions have been provided for both the Assets on the rates as provided in the Adjustments entries.
5) Closing stock was mentioned in the last that was also adjusted, in the Income statement.

All the adjustments were done and the comprehensive Income statement was prepared accordingly, keeping in mind the things pertaining to this year only and excluding the things which do not belong to this year (Kemp & Waybright, 2013).

Adjustments in the Statement of Position

1)  Closing stock was mentioned in the Asset side of the Balance sheet/ Statement of position.
2) The Two prepayments of Heat and Light and Rent were assets for the organization, as prepayments for further years are considered as Assets for the organization, and thereby are included in the Assets side of the Statement of position or balance sheet.
3)  Provision of depreciations for both assets that is Equipments and Motor Vehicles are increased with the amount charged for the current year. Therefore the depreciations of 40,500 and 16000 respectively were further added to the provisions.
4) Provision of income tax were provided in the liability side of the Balance sheet with 12000, this was previously not mentioned, therefore added up in the balance sheet.

All the adjustments were done and balance sheet was prepared accordingly. The complete analysis of the Statement of Position made an analysis of the Assets and liabilities side, and increased the information knowledge about the Financial statements (Kemp & Waybright, 2013).

Comparison of the Performances of both the Companies

Tesco- Tesco is one of the biggest multinational groceries in British. It is one of the leading organizations in terms of revenue and profits among all the groceries stores throughout the globe. Looking at the Annual reports of the Tesco of the last 3 consecutive years i.e. 2013, 2014, 2015, its been evident Revenues has increased with the year 2014(£ 63557) with a certain margin, than it decreased in 2015(£ 62,284) again with certain margin.
The Profits of the organization has also seen some great ups and downs in the year 2013 is £120 in the year 2014 it increased to £970 but in the year 2015 it incurred huge losses i.e. (£5766), which shows unsuccessful expansion or any wrong strategy (Ahrendsen & Katchova, 2012).
It shows that with the consistent performance in the years 2013 and 2014, it than entered in to other expansion plans which ultimately lead to decrease in the performance of Tesco.
Morrison- Morrison is also one of the biggest groceries after Tesco, Sainsbury’s etc. This has emerged as prominent and trustworthy grocery store and is gaining popularity with its expansion plans.
The turnover of the Morrison in the year has been £ 18116 which show a decline in the year 2014 £ 17680, this meagre decline in the turnover shows the intense competition in the groceries industry.
The Profits figures of the organization through all the three years i.e. 2013, 2014 and 2015 showed a declining graph. In the year 2013 it was about £ 1206 where in the year it declined and was £ 1074 and it further declined in the year 2015 and was £761. The declining graph of the profits of the organization shows the inability of the organization to increase its sales and usage of wrong marketing techniques and methods (Ahrendsen & Katchova, 2012).
On an overall comparison of both the Organization it is clearly evident that, Morrison despite investing in Assets and improving business working methods, it is unable to increase its profits as well as turnover as compare to its competitive “ Tesco PLC".
Where Tesco has still managed to be on the leading side in the concerned industry but due to certain wrong strategies and techniques, it showed a decline in its revenue and profits in the year 2015.
As recommendation, Morrison needs to improve its working position by focusing on its marketing plans and thereby increase its turnover and profits. And Tesco needs to maintain its position by correcting its wrong measures and techniques (Ahrendsen & Katchova, 2012).

(Uechi, et. al., 2015)
Analysis
Gross profit refers to the profitability earn through selling of goods or services of the Organization.  The Gross profit margin of Tesco has been consistent throughout the years 2013 and 2014 showing the organization has not put in more efforts to increase its sales. By the year 2015, the gross profit margin became negative showing Organization did not manage to earn profits and the sales decreased by the year.
Return on Assets indicates the ability of a company to utilize its assets to earn income for the company. The increase in the Return on assets shows that company made a better use of its but in the year 2015, it showed a huge decline and also negative shows that company is not earning profits with the utilization of existing Assets (Uechi, et. al., 2015).
Morrison’s

Analysis
The consistent decrease in the Gross profit of Morrison’s shows that there has been consistent decrease in the sales of the Organization. therefore, the Gross profit margin showed a decrease in every year.
The return on assets has declined from the year 2013 to 2014, this shows that company has started earning losses and are not making full utilization of its Assets. Its assets are somewhere lying unutilized and organization is not able to make proper funds from the utilization of its Total Assets (Uechi, et. al., 2015).

Analysis
Current ratio represents the ability of the company to repay its current liabilities with the aid of Current assets. From the year 2013 to 2014, there has been an increase in the Current ratio which shows better capacity of the organization to repay current liability. But in the year 2015, there has been decline in the ratio, which shows increase in the liability.
Quick ratio refers to the capacity of the organization to repay its current liabilities with the use of its quick assets i.e. assets which can be easily convertible into liquid assets. Here, the current assets shoes an increase with the year 2014 but then in 2015 it shows a decline which means the Current assets falls down (El-Dalabeeh, 2013).
Morrison

(El-Dalabeeh, 2013)
Analysis
The current ratio of the Company has been consistent through all the years which show the consistency in investment in the Current assets and consistent liabilities of the Company. The capacity of the company to repay its current liabilities from its current assets is quite subtle and that company can arrange cash in case of urgency.
The Quick ratio has also been quite consistent, which shows company’s capability of paying back its current liability has been quite resistant. Quick ratio basically excludes inventory from the current assets as inventory is not considered to be easily convertible in the liquid assets as and when required in urgency. And the quick ratio of this company shows that it can mange funds in any sort of emergency (El-Dalabeeh, 2013).

Analysis
The Declining Operating expense ratio of Morrison’s expresses the increasing operating expense of the organization without increase in its sales. Therefore the company needs to increase its sales and also need to curtail in its increasing administrative/ operating expenses.
The Asset turnover ratio here expresses that the company is making consistent utilization of its Total Assets to earn revenue for the Organization. But there is a meagre decline in the ratio every year which shows that net sales are declining despite having proper assets (Maricica & Georgeta, 2012).