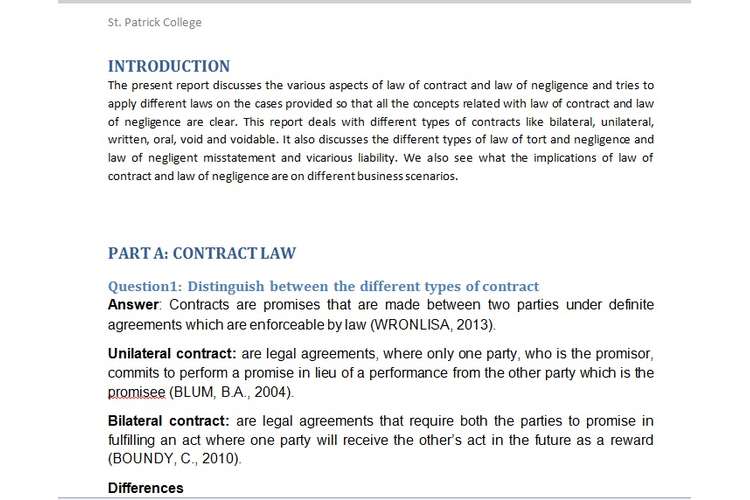 Question1: Distinguish between the different types of contract

Answer: Contracts are promises that are made between two parties under definite agreements which are enforceable by law (WRONLISA, 2013).
Unilateral contract:are legal agreements, where only one party, who is the promisor, commits to perform a promise in lieu of a performance from the other party which is the promisee (BLUM, B.A., 2004).
Bilateral contract:are legal agreements that require both the parties to promise in fulfilling an act where one party will receive the other’s act in the future as a reward (BOUNDY, C., 2010).
Differences
The Firstly the difference between bilateral and unilateral contract is that in unilateral promise is from one party only whereas in bilateral promise is from both the parties.
Secondly courts prefer the bilateral contracts over the unilateral contract.
Thirdly in bilateral contract both the parties have knowledge about the terms and conditions of the term and both the parties agree to be bound by that, whereas in unilateral contract the parties to the contract do not discuss or have the knowledge about the contract’s terms and conditions (RIORDAN, M, 1982).
Express contract:In express contract the promises and all its terms are clearly stated and also all the elements of the contract like offer, acceptance and consideration are accepted (BAUMEYER, Kat Kadian, 2014).
Implied contract:These types of contracts are not written or expressed clearly, but where because of certain circumstances one person may get unjustly enriched as a result of their actions (BAUMEYER, Kat Kadian, 2014).
Differences
Express contracts are complete contracts and are legally valid whereas implied contracts are also known as quasi-contracts, which mean that they are not complete contracts, therefore courts decide the case on the basis that whether this contract existed before the performance or after the performance (BAUMEYER, Kat Kadian, 2014).
In express contract the terms are clearly decided by the parties and they have the knowledge about the contract, whereas in implied contract the common understanding based on the conduct of the parties serves as a contract (BAUMEYER, Kat Kadian, 2014).
Void contract:when a contract is not enforceable by law then that contract is known as a void contract (BUSINESS LAW, 2012).
Voidable contract:is a contract which is enforceable by the law at the option of one or more parties to the contract (BUSINESS LAW, 2012).
Differences:
A void contract does not create any legal rights; it is actually a total nullity in itself. On the other hand voidable contract can take full legal effect unless it is disputed and set unaccepted by the person entitle to do so.
A void contract is valid when it is entered into by the parties but later on becomes void due to some reasons, whereas voidable contract may be voidable since the contract was made or later on becomes voidable.
When a contract is void because it is illegal, its collateral dealings also becomes void in nature, on the other hand voidable contract does not affect the collateral dealings (BUSINESS LAW, 2012).

Question 2: Answer the case studies below