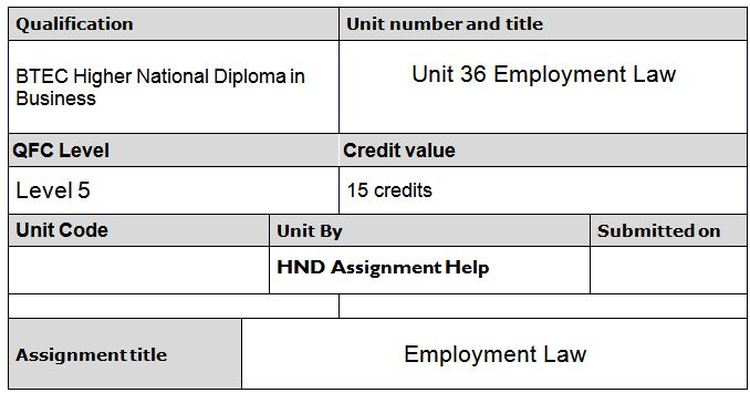 It is Monday morning and Lloyd, the Senior Partner, has just remembered that he had agreed to deliver a lecture in the evening at the local College to students who are studying Employment Law.  There are a number of Lecturers that have been invited to speak each week and each lecturer has been given topics that they must cover.
Lloyd has been searching all morning for the paperwork which confirms the topics for his lecture.  By mid-afternoon he asks you to telephone the College to see if you can find out what the topics are.  You manage to do this but by the time you find out Lloyd is leaving for Court and he will not be in for the rest of the day.  He therefore tells you that you must leave any other work you have and focus on preparing the content of the lecture for him.  He has no IT skills whatsoever and therefore there is no need to prepare any slides or anything of that nature.  He simply wants you to prepare a written report that he can collect from you and read out.
In the presentation report you should clearly:
Explain to the students the Sources of Employment Law  (Learning Outcome 1.1)

Dominic is one of the other Solicitors in the department.  He has a meeting with Linda and Mark who work at Hyams Limited.  He asks you to join the meeting and you learn that Hyams Limited is an independent bookshop with its main store based in Leicester. It has two additional stores in Rockingham and Tollerton. Hyams Limited employs 30 staff in the Leicester store, 25 staff in the Rockingham store and 20 staff in the Tollerton store. The three stores are about 20 miles apart.
You are told that due to the stagnant economy, challenging retail environment and the growing popularity of eBooks, sales of printed books have seen a sharp decline and as a result Derek, the managing director of Hyams Limited, announced that the Tollerton store would shut down. Derek declared a redundancy situation affecting all staff at the three stores. He drew up a redundancy selection matrix where experience, time-keeping, reliability and sickness record were taken into account.
Linda, who has come to see you, was a sales consultant in the Tollerton store. She worked there for six years. Her terms and conditions of employment stated that she is self-employed and not entitled to sick pay or holiday pay. She is responsible for paying her own Income Tax and National Insurance. She could not work for any other organisation whilst being employed by Hyams Limited. Her working hours are 30 hours per week. She can send a suitably qualified substitute to replace her if she cannot work for any reason. She is under the direct control of Derek. Linda says that she has been told that her employment has been terminated because the Tollerton store will shut down.
Mark who has also come to see you was selected for redundancy. He worked as a sales assistant in the Tollerton store. Mark scored well on the redundancy matrix, has worked at Hyams Limited for 15 years and has had excellent feedback from customers and colleagues. He suspects that he has been selected for redundancy because, a month ago, he asked Derek if he could work flexibly as he looks after his disabled daughter. Derek rejected his request outright stating that he is extremely busy.

Later in the day a new client drops into the office without an appointment.  There is nobody else around except you and Dominic. You see the client with Dominic but Dominic cannot stay long.
The client is Sue.  Sue is an engineer at the local Airport. She has worked there for 14 years. During her lunch break, she visited the duty-free shop at the airport as she wanted to buy herself a very expensive anti-ageing cream which she had run out of. Whilst waiting in the queue to pay, she caught sight of her colleague and friend, Jackie, outside the shop. Jackie broke her leg around six months ago and returned to work last week. Sue was therefore keen to catch up with Jackie. She shouted Jackie’s name but the duty-free shop was busy at lunchtime and Jackie did not hear Sue. Sue left the queue and ran after Jackie. The security guard noticed and shouted: ‘You haven’t paid for that cream!’ He then dragged Sue back into the shop. In her defence, Sue said: ‘I entirely forgot about the Cream when I saw Jackie. I just wanted to have a quick chat with my friend, whom I have not seen for a long time.’
The security guard immediately reported this incident to Sue’s manager, Pat. In her office, Pat told Sue that she was very disappointed with her behaviour. She said that ‘this is the end of your career now and your life is not worth living from now on …’. She had no choice but to terminate her contract with immediate effect. She confirmed the dismissal in a letter the following day.
Sue wants to know what her legal rights are, including any possible remedies.  Dominic tells you that he thinks Sue’s dismissal is in breach of the law.   He thinks that she will be entitled to claim either Unfair Dismissal, Constructive Dismissal or Wrongful Dismissal.  He is not sure which and has had enough for the day.  He wants you to do the following:

The following day you are spending time with Graham who is one of the other Partners.  Graham specialises in advising employers.  One of his long term clients is Walter & White. Walter & White is a firm of accountants and auditors. It has a specialised business rescue and support unit which is expanding. You are told that after a partners’ meeting, the firm decided to appoint two junior accountants to deal with the extra work. Alex, the Human Resources Manager, has posted the following job advertisement in the local newspaper:
We are a young, dynamic firm of accountants and auditors. We offer a range of quality services to clients and good career prospects. Due to expansion, we are seeking two junior accountants. Candidates must be between 21-31 years old. Candidates with a good degree in accountancy, commerce or business strategy should email their CV to Alex Robins at: A.Robins@jones&harris.com
Poppy is 34 years old. She has a first class degree in accountancy and has not worked since she gave birth to twins shortly after graduating. Poppy would like to work at Walter & White because she believes that the firm offers good career prospects and the office is close to her home. She is very annoyed that she cannot apply due to the age limit and has written to the company to complain.
The partners go on to tell you that they interviewed a woman by the name of Tilly for the position.  She was one of the unsuccessful candidates. Tilly is now saying that when she called the Human Resources Director prior to the interview and enquired about the interview arrangements, she was told that the chair of the interview panel would like it if she wore tight-fitted clothing or a short skirt. Tilly is saying that although she ignored the advice, she thought this was inappropriate. Tilly is also complaining that during the interview, the panel asked her whether she has plans to start a family. Tilly has complained that she is a very well-qualified candidate and feels that the interview process has been conducted in an unsatisfactory manner.
Finally the partners mention that they were inundated with CV’s and applications for the positions. They managed to get applicants to answer all sorts of questions including how many times they have been married, their favourite films and their clothing sizes.  Alex has added the CV’s, applications and interview notes to all the personnel information which he keeps in torn cardboard boxes on his desk.  Alex is a bit untidy and has been known to store paperwork in his car boot when his desk and floor are overflowing.  The Partners want to help him out and think it might be a good idea to sell all this information on.  They will make money out of selling the information and it will also help to clean the place up.
The partners are confused and need advice on whether the job advertisement Alex placed in the local paper was discriminatory and, if so, what remedies may be available to someone like Poppy.  Graham asks you to advise them and you must record the advice you give in writing (Learning outcome 3.1)
Secondly they felt everything about the interview process was fine and have no idea what Tilly is complaining about.  Again, Graham asks you to advise them and you must record the advice you give in writing (Learning outcome 3.1)
Thirdly, Graham believes that the Partners and Alex have no idea about the relationship between the developing law on discrimination and human resource management practices.  He asks you to put some information together for them that they can take away; in particular he wants you to explain about the positive promotion of equal opportunities and diversity in the workplace (Learning outcome 3.2)

Walter & White recruited Tom for one of the positions.  The Partners think he has settled in very well and is doing a good job.  Alex, the Human Resources Manager, has not got around to putting together an employment contract for Tom so the Partners have asked you to do this instead.
You must put together a draft employment contract for Tom for the Partners to consider.
They will need you to explain the nature and scope of the contract. (Learning outcome 2.2)

Two weeks later you travel with Graham to the offices of Walter & White to deliver the draft employment contract.  As soon as Graham enters the main office he tell you he is very concerned and asks you to you take a photograph of the office.